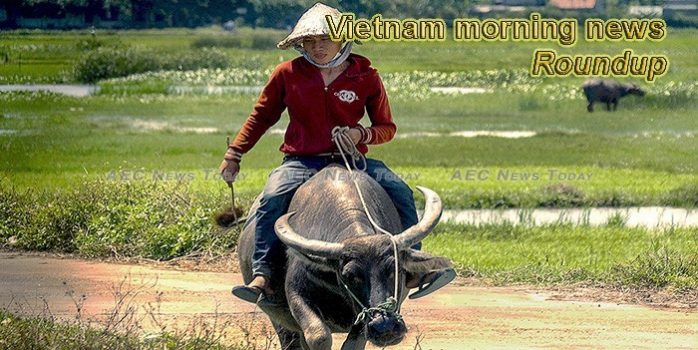 4.0 revolution occurring behind the scenes at local factories
Vietnamese manufacturers have been quietly preparing their companies to adapt to the 4.0 industrial revolution.
— VietnamNet Bridge

Vietnam aviation authority probes landing error at Hanoi airport
Aviation authorities are investigating why a Vietnam Airlines plane did not land in the middle of the runway at Hanoi’s Noi Bai airport.
— VnExpress

Private sector emerges as new growth engine for Vietnam aviation industry: experts
Although private enterprises only invested in 14% of the number of airports in the world, those airports are serving 41% of international air passengers, according to aviation experts.
— The Hanoi Times

Vietnam Party dismisses top Public Security officials, recommends demotion
A current and a former deputy minister of Public Security have been dismissed from all Party positions and face demotion from their current ranks.
— VnExpress

Vietnam to limit waste imports as shipments build up at ports
Vietnam will stop issuing new licenses for the import of waste and crack down on illegal shipments as thousands of containers of paper, plastic and metal scrap build up at the country’s ports, raising concerns about the environment.
— Hellenic Shipping News

EVFTA expected to be signed late 2018
Bernd Lange, Chairman of the European Parliament’s Committee on International Trade, has said he expects the European Union-Vietnam Free Trade Agreement (EVFTA) to be signed at the Asia-Europe Meeting Summit in October or sometime in November this year.
— Nhan Dan Online

CEO absconds as another cryptocurrency firm implodes in Vietnam
Over a dozen investors of a cryptocurrency mining company have claimed to be victims of a fraud case after the company’s director went missing, allegedly with their money.
— VnExpress

Port investor in HCMC likely to suffer heavy losses
Saigon Premier Container Terminal (SPCT) in HCMC has not been able to accommodate large container ships due to sedimentation in the Soai Rap River since June 2017, increasing the likelihood of heavy losses for the investor of the multi-million-dollar terminal.
— VietnamNet Bridge

More players arriving in ride-hailing business
Uber’s recent exit from Vietnam has prompted many local and regional companies to eye a larger slice of the ride-hailing market in the country.
— VietnamNet Bridge

Friendship association fosters Vietnam – Russia relations
The Vietnam-Russia Friendship Association has held many activities in various fields since the beginning of this year and become a bridge for cooperation in economy-trade, culture-education and science-technology between the two nations, said its President Tran Binh Minh.
— Nhan Dan Online

CAN VIETNAM TAKE SINGAPORE’S STOCK MARKET CROWN?
The Lion City has long been atop the regional capital markets food chain, but other nations such as Vietnam, Malaysia and Indonesia are starting to compete.
— South China Morning Post