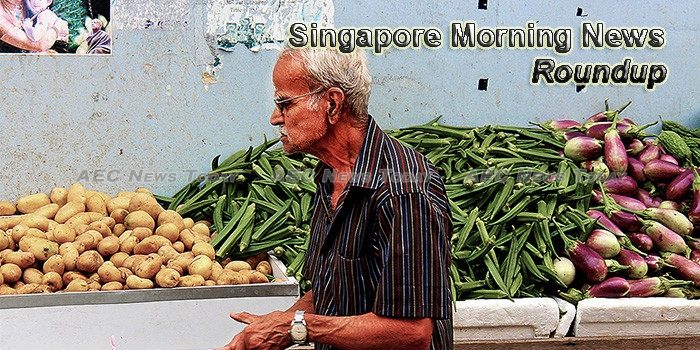 Changi Airport armed with $1.35b fund to export expertise
Changi Airport has set up a more than US$1 billion (S$1.35 billion) kitty – partly funded by external investors – to fuel ambitious plans to export its technical and operational expertise.
— The Straits Times (paywall)

Record jumps in hospital and clinic attendances
Hospital admissions increased by a record 9 per cent last year compared with 2015. It is more than double the annual increases of up to 4 per cent in the past decade.
— The New Paper

Commentary: Singapore’s ASEAN chairmanship a chance to make practical progress on South China Sea
2017 marks a challenging year for ASEAN, the same year that ushers in 50 years since the organisation was formed.
— Channel NewsAsia

This bank holds the largest AUM in Singapore
High net worth clients entrusted US$286.5b to it in 2016.
— Singapore Business Review

Regulatory compliance, costs could turn firms away from SGX
SINGAPORE is a leading financial hub, ranking third globally just behind London and New York, but its stock market is another story.
— The Business Times

Defective train mars Downtown Line open house, disrupts services
A defective train near Hillview MRT station on the Downtown Line caused delays – and unhappiness among some commuters – on a new stretch of the line that opened for free to the public on Sunday (Oct 15).
— Today Online

Going cashless quickly is wise
Going cashless has been in the news here of late, with Prime Minister Lee Hsien Loong touching on the topic during his National Day Rally speech and the Land Transport Authority announcing that public trains and buses will go fully cashless by 2020.
— Today Online

Hotels squeezed as room supply rises
Projected visitor arrivals in Singapore are expected to hit an all-time high this year, but with more hotel rooms in the pipeline profit margins appear to be shrinking.
— Channel NewsAsia (video)

Schools taking steps to reduce stress in students
During morning assembly last month, Deyna Yeo, 15, stood nervously before her schoolmates in Serangoon Garden Secondary School and made a speech.
— The New Paper

LTA looks at making crossings safer for pedestrians
The Land Transport Authority (LTA) is taking steps to rectify this for at least one such crossing.
— The New Paper

Promise of Singapore as an education hub fading?
Shares of Raffles Education Corp are up a staggering 89 per cent so far this year which, to the uninitiated observer, may suggest that the education group is going great guns.
— The Straits Times (paywall)

The rise and rise of chatbots
CHATBOTS promise to be cheaper, faster and better than their human alternative. No wonder then than businesses from banks to retailers are rolling them out.
— The Business Times

Singapore is not a ‘boring city’ – if you know where to look
Growing up in orderly, air-conditioned Singapore, I had always longed for a chance to travel and taste life outside the confines of our safe borders.
— The Straits Times (paywall)

Islands: Ireland building on success in the Singapore area
Like Ireland, Singapore has experienced dynamic growth and the opportunities and challenges that accompany it. Those challenges have been overcome through innovation, helping Ireland and Singapore to become known as ‘innovation islands’, hubs for world-class entrepreneurs and ecosystems that support the development of multinationals.
— Independent ie

Dealogic Now in Singapore!
Financial platform company Dealogic has opened its doors in Singapore as a sign of the company’s dedication and confidence in business opportunities in Southeast Asia. “We’ve worked with clients in Singapore for years via our Hong Kong office,” noted Romaine Jackson, Southeast Asia Head of Client Coverage at Dealogic. “We realized we could provide so much more value and deepen the relationships with a local presence.”
— BusinessWire

How this Singaporean startup is using data science to automate PR
SURVIVING the startup world can be akin to navigating a minefield, and managing good public relations (PR) can only add to the burden which is why Singaporean startup, SumoStory, is disrupting traditional practices through automation.
— TechWire Asia

Bigbelly trash bin Wi-Fi arrives in Singapore
A Singaporean pilot project that has equipped public trash bins with Wi-Fi APs is so popular that its leaders are now looking for ways to provide more bandwidth to accommodate a surge in users.
— Wi-Fi Now