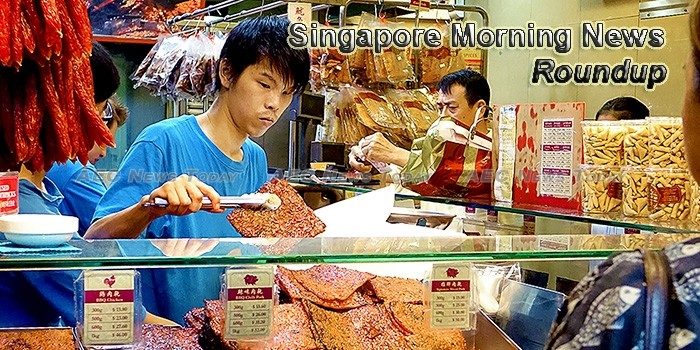 Ezra Files for U.S. Bankruptcy as Marine Debt Crunch Spreads
Ezra Holdings Ltd., a Singapore-listed oilfield services group, filed for bankruptcy in the U.S. after weeks of facing hostile actions from creditors at home and abroad as it struggles to recover from a slump in oil prices over the past three years.
— Bloomberg Quint

Singapore investors still on long-term ‘sell’ on Wall Street
SINGAPORE-BASED investors capitalised on a 4 per cent rise in the S&P 500 and a 9 per cent gain for the Dow Jones Industrial Average in 2016’s fourth quarter by selling into strength – the latest US Treasury data showed them disposing of a net US$972 million of New York Stock Exchange (NYSE ) shares during that period.
— The Business Times

Singapore provides an example for the UAE to match
Earlier this month, Sheikh Mohammed bin Zayed, Crown Prince of Abu Dhabi and Deputy Supreme Commander of the Armed Forces, gave an inspiring speech to Emirati youth at the Mohammed bin Zayed Majlis for Future Generations.
— The National

Maritime CEO Forum set for April 24 in Singapore
Today marks the official launch of the Maritime CEO Forum. To be held at the Fullerton Hotel on April 24 at the start of Singapore Maritime Week, the event will bring together some of the biggest names in shipowning shipmanagement for what the organizers-the parent of this site-describe as ‘the ultimate anti-shipping conference’.
— Splash24/7

Interior design trade bodies act to lift standards
LOCAL interior design firms looking to move into China will soon be able to count on assistance from the recently revived Society of Interior Designers Singapore (Sids) which has lined up ambitious plans to advance the industry’s interests.
— The Business Times

How to land a job in Google
Singaporean Muhammad Mohsin admits to being awed by the work environment and staff perks provided by his employer Google, when he started work as a software engineer at Mountain View, California, four years ago.
— The Straits Times

Brazil says exports safe despite rotten meat scandal
Brazil tried to reassure the world on Sunday that its huge meat industry poses no threat despite allegations that major exporters have been selling tainted beef and poultry with falsified inspection certificates.
— The Business Times

Sports minister Fu: ‘Football must be the priority’
The gloves appear to be off, as the Football Association of Singapore (FAS) gears up for its first contested elections next month.
— The New Paper

More rain shelters but bikers still stopping at road shoulders
Singapore has built more rain shelters on expressways for motorcyclists to take cover or take breaks, but some bikers have still been spotted pulling up on road shoulders despite a horrific crash on the Bukit Timah Expressway (BKE) on March 11.
— The New Paper

Is Bank of Singapore Making an Indonesian Move?
The Indonesian unit of Singapore’s Oversea-Chinese Banking Corp, is said to be about to establish a private-banking business.
— Finews.Asia

Freedom of speech: S’pore in the eyes the world?
I refer to the High Commissioner of Singapore, London’s letter “Free speech in Singapore” (The Economist, Mar 17).
— The Independent

Spillover selling of banks to come?
News over the weekend that offshore and marine (O&M) company Ezra Holdings has filed for US Chapter 11 bankruptcy protection in order to restructure its debts will undoubtedly be the main feature of trading in the early part of this week.
— The New Paper

One in two employers do not intend to hire deaf people: Survey
When he went for job interviews, Mr Alfred Yeo, who is deaf, would be asked how he would communicate with colleagues, or if he could read lips.
— Today Online