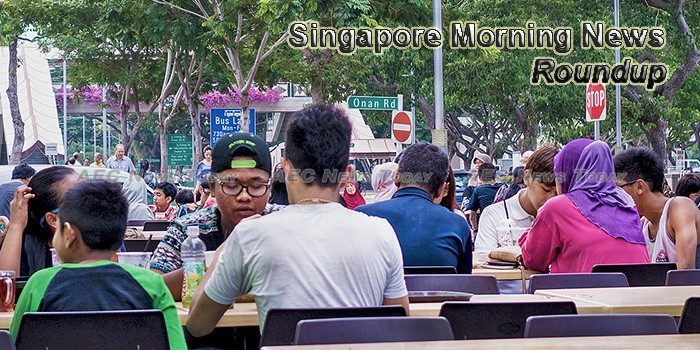 Singapore and Hong Kong’s Airport Dominance Is Under Threat
For decades, Singapore and Hong Kong have reigned supreme: as key transit points connecting travelers in Asia to and from the rest of the world. But now, a $1 trillion global airport spree is threatening the status quo.
— Bloomberg

More SMEs failing to pay debts on time, survey shows
Nearly two out of three small and medium-sized enterprises (SMEs) failed to pay their debts on time in the second quarter of the year, the highest level in two years, according to research by DP Information Group (DP Info).
— Today Online

Agilent to invest S$85m over 5 years in Singapore
AGILENT Technologies will invest S$85 million over five years in Singapore to double its production capacity by expanding its advanced manufacturing and applied research and development (R&D) capabilities here on the back of robust growth.
— The Business Times

Singapore’s 50 Richest 2017: Fortunes Rise Amid Changing Times
Singaporeans got a jolt in June when a quietly raging dispute between Prime Minister Lee Hsien Loong and his two siblings exploded on social media. Such unprecedented public venting, by the late Lee Kuan Yew’s heirs no less, exposed a rare vulnerability in the tightly governed nation, which has also faced the threat of regional isolation lately.
— Forbes

Eco-Link at Mandai to be ready by 2019
Come 2019, local wildlife in the Mandai precinct can travel between two sections of the Central Catchment Nature Reserve using a dedicated bridge, Mandai Park Holdings (MPH) announced on Wednesday (Jul 26).
— Channel NewsAsia

Singapore defense firm ST Engineering launches US$150M venture arm
ST Engineering, a defence and engineering firm, announced yesterday it has launched a US$150 million venture capital arm to “scout for and invest in promising technology start-ups” in sectors that fit the company’s profile.
— The Independent Singapore

Uneven growth the new normal for Singapore economy?
Manufacturing – now the brightest spot in the Singapore economy – turned in yet another outstanding performance last month, thanks largely to electronics makers.
— The Straits Times (paywall)

Online buyers at Qoo10 can now insure against defective goods
Shoppers at the Qoo10 Singapore online marketplace can now purchase insurance protection to cover against defective or malfunctioned electronic goods worth at least S$100, with a new partnership between Qoo10 and local insurer NTUC Income.
— Today Online

AHTC calls for S$33.7m worth of contracts to be voided
Aljunied-Hougang Town Council (AHTC) wants contracts worth over S$33 million with former managing agent FM Solutions & Services (FMSS) and service provider FM Solutions and Integrated Services (FMSI) to be declared void, owing to the supposed breach of fiduciary duties by its town councillors.
— Today Online

Noble Group seeks buyers for gas and power business
Noble Group Ltd. is seeking to sell its gas and power trading business and has held talks with rival traders, according to people familiar with the discussions.
— DealStreetAsia

Singapore is Testing Out Glow-in-the-Dark Pathways
Share Tweet
In an effort to make evening walks on a renovated pathway more convenient, Singapore has started testing a system that will make its roads illuminate in the dark.
— Nextshark

AHTC lawsuit an opportunity for WP MPs to explain their side of story: Sylvia Lim, Pritam Singh
The Workers’ Party (WP) MPs at the centre of a lawsuit over allegedly improper payments made by the Aljunied-Hougang Town Council (AHTC) on Wednesday (Jul 26) said that they saw the court case as an opportunity to explain to the court and the public why they made the decisions they did.
— Channel NewsAsia

Swiss-Singapore ties at new high
As Singapore and Switzerland mark 50 years of diplomatic relations this year, how do you view the state of relations between the two countries both at the political and economic levels?
— The Business Times