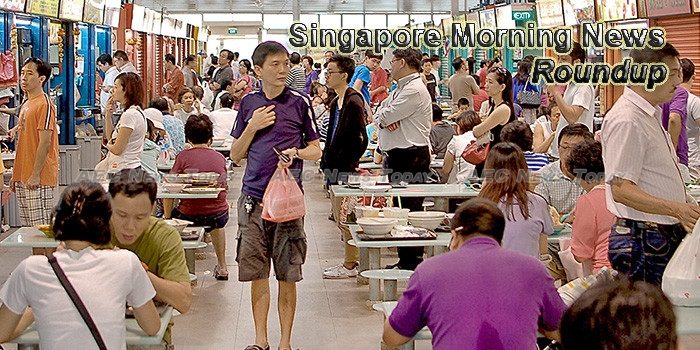 Singapore, UK, New Zealand, and UAE among World’s Stand Out Digital Economies
The Fletcher School and Mastercard unveil the Digital Evolution Index 2017, an in-depth look at technology adoption and the state of digital trust around the world
— Business Wire

Singapore must ‘stand up and be counted’: PM Lee on country’s foreign policy
As a small country, Singapore has to “take the world as it is” but at the same time protect the country’s fundamental interests, especially in matters of safety, security, or its position in the world.
— Channel NewsAsia

The secret of Singapore’s development master plan
Sir, James Crabtree’s Notebook column “London can learn from Singapore’s high-rise living” (July 11) misses a few crucial points relating to Singapore’s success in delivering housing at scale and in the right places. Building high and making tall buildings work are not the only factors at play when it comes to explaining Singapore’s success in this area.
— The Financial Times

Building a ‘Smart Nation’ in Singapore doesn’t come cheap
Schooling isn’t cheap in Singapore: Not just for citizens, but for the government too.
— Today Online

PM Lee: Singapore has to speak up on key issues to secure its space in the world
SINGAPORE has a responsibility to highlight important issues which concern it, deal with them, and push its position on them, Prime Minister Lee Hsien Loong said.
— The Business Times

Singapore working to deepen ties with China and US: PM
SINGAPORE has a broad, wide-ranging relationship with both China and the United States, Prime Minister Lee Hsien Loong said on Monday.
— The Business Times

MBS dealer stole chips by dropping them into the back of his shirt
A dealer who misappropriated thousands of dollars in casino chips at Marina Bay Sands (MBS) casino was sentenced to nine months’ jail yesterday.
— The New Paper

SAL pilots programme to prepare lawyers for advances in AI
THE Singapore Academy of Law (SAL) has announced the launch of a two- year pilot programme to help law firms cope with the disruption in law practices caused by advances in artificial intelligence (AI) technology.
— The Business Times

New NUH study to test stem cells as treatment for liver disease
The use of stem cell treatment to repair liver cirrhosis, or hardening of the liver, will be tested in a clinical trial here involving 46 patients and costing S$2.6 million.
— Today Online

Construction firm fined S$250,000 after worker died in accident under Yio Chu Kang flyover
A construction company and one of its supervisors have been convicted and fined for failing to take adequate safety measures on site, resulting in the death of a worker two years ago.
— Channel NewsAsia

What Did the Brunei Sultan’s Singapore Visit Accomplish?
Last week, Brunei’s Sultan Hassanal Bolkiah paid a two-day state visit to Singapore. Though the highlight of the visit was the commemoration of the 50th anniversary of their unique currency agreement, it also demonstrated the broader significance of the relationship for both sides.
— The Diplomat

Condo resale prices up 0.9%
According to SRX Property, both CCR and OCR recorded a price increase of 1.3% and 1.1% respectively, while RCR price index has remained unchanged at 0.0%.
— Singapore Business Review

Top 5 reasons Singapore employers extend counteroffers
According to a recent survey by Robert Half, top reasons for doing so included employees fitting in well with the company and team (60%), retaining knowledge within the company (59%) and additional costs related to hiring (57%).
— Human Resources Online

Networking is key to landing a job in Singapore, finds Linkedin study
Online introverts, especially those based in Singapore, are missing out on a slew of job opportunities available on the Internet, according to recent study findings by LinkedIn.
— The Edge Markets

Singapore Rolls the Dice with Bold Education Reforms
Governments in many countries are talking about reforming their education systems to better equip graduates seeking work and to provide business with the skilled labor force for which it cries out.
— TheNewsLens