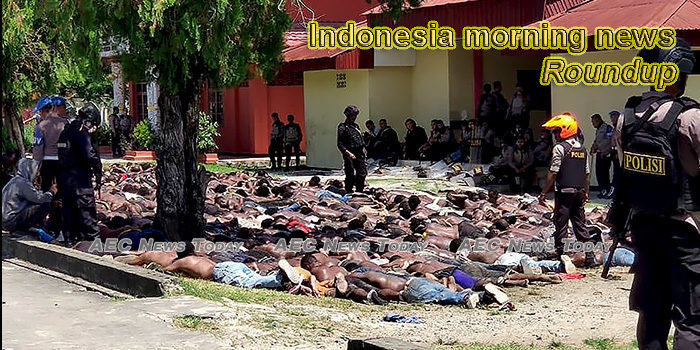 Forget the Dollar: Indonesia, Japan Agree to Settle Cross-Border Transactions in Local Currencies
Indonesia and Japan have agreed on a local currency settlement deal that will allow both countries to use the rupiah and the yen to settle bilateral trade and direct investment transactions.
— Jakarta Globe

‘It was scary’: Wall collapse raises concerns about coastal safety in Jakarta
A 170-meter section of the coastal wall built as part of the National Capital Integrated Coastal Development (NCICD) in North Jakarta, collapsed earlier this week, prompting the government to launch an investigation amid concerns about the safety of coastal areas from future flooding.
— The Jakarta Post

Indonesia’s narcotics agency says there are 3.6 million drug users in the country, marijuana most popular
Indonesia may have some of the harshest drug laws in the world, but new data showed that millions still consume illegal narcotics in the country.
— Coconuts (paywall)

Health Ministry warns of spread of Hepatitis A in Greater Jakarta following outbreak in Depok
The outbreak of hepatitis A affecting hundreds of residents of Depok in West Java may have spread to other areas, according to the Health Ministry, which has urged residents in its neighboring cities in Greater Jakarta to increase awareness about the potential of being affected.
— The Jakarta Post

10 dead turtles over 2 months in Bengkulu, some found near power plant
Local residents have found another dead sea turtle washed up on a beach near Baai Island Port in the city of Bengkulu, on Thursday, making it the 10th dead turtle discovered in the area over the past two months.
— The Jakarta Post

Only 13% of Indonesian family businesses survive until third generation: Deloitte
Family businesses account for almost all of businesses in Indonesia, employing millions of people and boosting the economy.
— The Jakarta Post

Australian breeder cattle sold to Indonesia as aid are ending up starving or dead
Hundreds of Australian cattle sold to the Indonesian Government in 2018 for breeding are malnourished or dead, and images obtained by the ABC show the rotting corpses of animals that could have bred for several years.
— ABC

Tourism in the red zone: BNPB defends disaster mitigation efforts
The government has defended its efforts to deal with disaster threats in priority tourist destinations, some of which lie in so-called red zones, or areas highly prone to natural catastrophes like earthquakes and tsunamis.
— The Jakarta Post

Look at the Amazon, not us: Indonesia claims handling forest fires better than other nations
Coordinating Political, Legal and Security Affairs Minister Mahfud MD played down on Friday recent reports from several organizations regarding Indonesia’s forest fires in 2019, saying that the country is better off than other countries that also suffered from forest fires.
— The Jakarta Post

Indonesia’s 2019 fire season not doomsday for forests, but ecological concerns remain
When the news of raging forest and land fires across the country broke out earlier this year, concerns were raised that they could be the end for Indonesia’s remaining rainforests as the massive flames engulfed the country’s vast green belt inch by inch.
— The Jakarta Post

Shopee Gears Up SMEs for Indonesia’s Digital Economic Growth
For Indonesia to be the “Digital Energy of Asia” by 2020, it is imperative to digitally gear up for small and medium enterprises development in the face of Industry 4.0, Vice Presiden Ma’ruf Amin has said.
— Jakarta Globe

‘Why is the government so obsessed?’ Law on Quran study groups sparks public outcry
Sariyadi, 62, has been the head of the At-Taqwa Mosque welfare council in Bekasi, West Java, for the past 30 years.
— The Jakarta Post

Indonesia-India agree on Aceh-Andaman connectivity development
Indonesia and India have agreed on a plan of action to develop the connectivity between Aceh – Andaman and Nicobar Islands in the first joint task force meeting held in Banda Aceh on December 7.
— Antara News

Transjakarta caused traffic jams in initial years of operation, study says
While Transjakarta is lauded by many as the breakthrough solution for Jakarta’s infamous traffic congestion, a study has suggested otherwise, arguing that the capital’s first bus rapid transit (BRT) system had the spillover effect of worsening jams in the initial years of its operation.
— The Jakarta Post

Indonesia, Australia encourage IA-CEPA ratification
The governments of Indonesia and Australia are committed to encouraging the ratification of the Indonesia-Australia Comprehensive Economic Partnership Agreement (IA-CEPA), according to the foreign ministers of the two countries.
— Antara News

Indonesia cooperates with Denmark to develop renewable energy sources
The Ministry of Energy and Mineral Resources established a cooperation with the government of Denmark in developing renewable energy resources.
— Antara News

‘Come home’ to make change: Gojek VP sends message to Indonesian diaspora
Gojek vice president of data science Syafri Bahar has called on Indonesians overseas to return to the country, saying there is no better time than today to contribute to the country thanks to the burgeoning digital economy.
— The Jakarta Post

South Africa lends all-out support for creation of Indonesia-SACU PTA
The South African government has thrown its weight behind the creation of the Preferential Trade Agreement (PTA) between Indonesia and the Southern African Customs Union (SACU).
— Antara News

Jakarta tax agency hunts luxury car tax evaders
The Jakarta Tax and Levy Agency (BPRD) and the Jakarta Police are conducting joint raids on the homes of luxury car owners as part of the city administration’s efforts to collect tax arrears on over a thousand luxury cars registered in Jakarta.
— The Jakarta Post

Indonesia, Romania hold discussions on cooperation in worker placement
Indonesia and Romania further discussed opportunities for cooperation in the placement of workers with specific skills, particularly in health and manufacturing services, to Romania, as outlined in the memorandum of understanding (MoU) between both nations.
— Antara News

Teaching the disabled: Inclusive education remains a challenge
Ideally, there would be a school for children with special needs in each district of the country to ensure easy access to education for disabled students.
— The Jakarta Post

Lesson from Past: How Companies Can Emerge Winners Even During Downturn
Some factors have made Indonesia less resilient today to the anticipated global downturn and businesses may plunge into recession unless their executives adopt concrete plans and actions now, analysts have warned.
— Jakarta Globe

Watch: City puts up concrete barriers at U-turn on crowded intersection, motorists band together to remove them
We can now put knee-high concrete barriers among the list of things ineffective at controlling the oftentimes out-of-control Jakarta motorists.
— Coconuts (paywall)