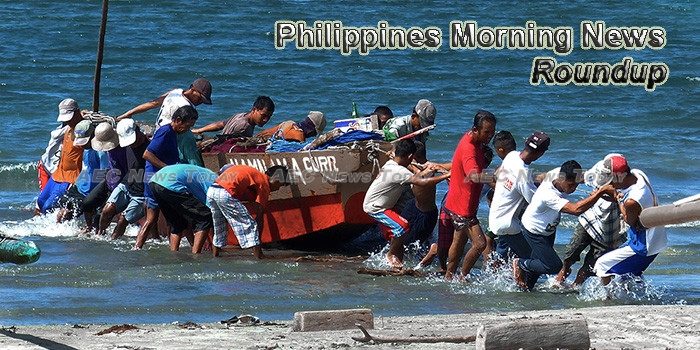 World Bank: Easing of migration rules to cut poverty in Asean
Southeast Asian countries like the Philippines will have a better chance of reducing poverty if governments will lift the restrictions to migration, the World Bank said on Monday.
— The Business Mirror

Megaworld pins hope on BPOs to drive demand
MEGAWORLD Corp. on Monday said it expects to have one million square meters (sq.m.) of office space inventory by the end of 2017, as the property developer remains confident the business process outsourcing (BPO) sector will continue to drive demand.
— Business World

Philippines ag imports from US to increase 10% and reach $2.75B
The value of agricultural products that the Philippines will import from the United States this year would likely reach $2.75 billion, 10 percent higher than the $2.5-billion import bill recorded last year, according to the latest report of the Global Agricultural Information Network (Gain) report.
— Fresh Plaza

Manila’s next big challenge is constitutional reform
One of the core commitments of President Rodrigo Duterte is to shepherd the transition of the Philippines to a federal form of government – an undertaking that requires a complete overhaul of the country’s constitution.
— Asia Times

Honeymoon period over, Duterte told
CRITICS of President Rodrigo Duterte on Monday called for a stop to extrajudicial killings and a rethink of the war on drugs following the 18-point drop in the Chief Executive’s net satisfaction rating.
— The Manila Times

PEZA-approved investment pledges up 94.12% at P196.5B
Investment pledges approved by the Philippine Economic Zone Authority (PEZA) nearly doubled in the first nine months of the year, officials said on Monday.
— The Manila Times

Employee tax perks at stake
All is fair in tax reform. This is the clear message of the first package of the comprehensive tax reform program initiated by the Department of Finance (DOF) dubbed as the Tax Reform for Acceleration and Inclusion (TRAIN). One of the TRAIN’s objectives is to simplify the country’s personal income tax system by lowering income tax rates and broadening the tax base brackets.
— Philstar

International mission urges stop to killings in Philippines
A mission of international parliamentarians and civil society leaders has urged Philippine President Rodrigo Duterte’s government to stop what it says is the alarming number of drug suspects being killed in the campaign against illegal drugs and the administration’s aggressive efforts to silence its critics.
— WTHR

Philippines apologizes to China for using Taiwan logo at ceremony
The Philippines apologized to China on Monday for a “grievous but purely unintentional” mistake after it displayed the logo of the defense ministry of Taiwan, not China, at an event last week marking Beijing’s donation of 3,000 rifles to Manila.
— ABS-CBN

Panelo: War on drugs to go on despite dip in Duterte’s ratings
Despite the double-digit declines in his public satisfaction and trust ratings, President Duterte remains “unperturbed” and will pursue his campaign against illegal drugs, Chief Presidential Legal Counsel Salvador Panelo said on Monday.
— Philippines Daily Inquirer

Duterte signs EO creating bank for OFWs
President Rodrigo Duterte has signed an executive order (EO) that will pave the way for the creation of an Overseas Filipino Bank (OFB) dedicated to provide financial products and services tailored to the requirements of overseas Filipinos.
— Philippine News Agency

Philippines Seeks to Improve Relations with US
The Philippines appears to be seeking a return to stronger economic relations with the United States. Experts say the change may be designed to balance the Philippines’ increasing dependence on China.
— Voice of America

Philippines’ Duterte orders special bank for overseas Filipinos
Philippine President Rodrigo Duterte has ordered the creation of a bank catering to Filipinos overseas, the presidential office said yesterday, fulfilling a campaign promise to a sector which catapulted him to power.
— Daily Mirror/ Reuters

Coast Guard outpost eyed off Cagayan to secure Philippine Rise
The Department of Transportation (DOTr) is planning to put an outpost of the Philippine Coast Guard (PCG) in the eastern coast of Cagayan province to protect the country’s territory.
— Rappler