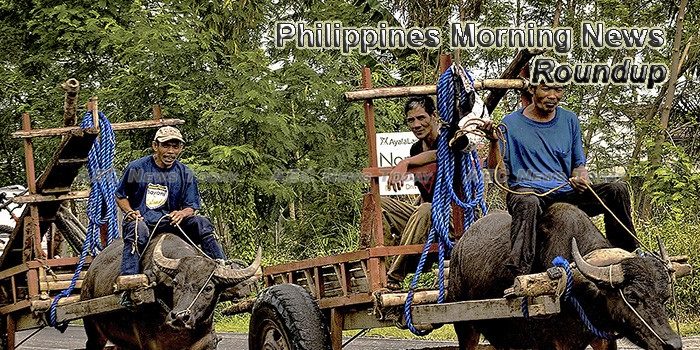 Info-sharing platform to ease doing business
The Department of Finance (DOF) along with the Departments of Information Technology (DICT) and of Interior and Local Government (DILG) led the launch of a digital platform that would streamline the application and renewal of business permits through the online sharing of information by government agencies involved in this process.
— Malaya

DOH eyes refund for dengue vaccine
The Department of Health (DOH) is looking into the possibility of requiring the manufacturer of the world’s first dengue vaccine to refund the government following reports that the treatment poses risks to people without a history of dengue.
— Philstar

The Philippines’ Strongman Syndrome
“If your destabilisation is taking place and there is chaos already, I will not hesitate to declare a revolutionary government until the end of my term,” warned firebrand Philippine President Rodrigo Duterte in October, amid growing domestic opposition to his presidency.
— Al Jazeera

Smart nearly done with mobile broadband upgrade
The Philippines’ Smart Communications is close to meeting its target of covering 90% municipalities with 3G or 4G mobile broadband services by early next year.
— Telecom Asia

Singapore-Philippines Urban Warfare Training Kicks Off
On Monday, Singapore announced that a new program to help build Philippine military expertise in urban warfare had officially kicked off.
— The Diplomat

Duterte urges Congress anew: Pass FOI bill
President Duterte yesterday again appealed to Congress to pass the freedom of information (FOI) bill, more than a year after he signed an executive order implementing the policy in the executive branch.
— Philstar

Impeach vote on Sereno moved to January
VOTING on the impeachment complaint against Chief Justice Ma. Lourdes Sereno at the House committee on justice has been moved to January 2018 instead of December 11 as earlier announced.
— Malaya

Filipinos warned against applying for overseas work in 7 websites
In an advisory, POEA said jobspoea.com, poeajobsabroad.org, poea-jobsabroad.blogspot.com, poeanursingjobs.info, and poeaworkabroad.net are not affiliated with its operations.
— Manila Bulletin

PHILIPPINES OFFICIALLY VOWS TO IMPROVE WELFARE OF MIGRANT WORKERS
The Department of Foreign Affairs (DFA) of the Philippines pledged to continually assist Filipino migrant workers in the MSAR, along with the bureau’s substantial increase in its budget for 2018, which amounts to PHP1 billion from PHP400 million last year.
— MACAU DAILY TIMES

Cops to have rights booklet on cell phones
The Human Rights Affairs Office (HRAO) of the Philippine National Police (PNP) wants the mobile application “Know Your Rights” to be mandatory for every police officer.
— Philstar

Bird-flu case in Cabiao to delay resumption of chicken exports
Exporters would have to wait until the first quarter of 2018 for the Philippines to regain its bird flu-free status, after a new case of avian influenza (AI) was discovered in Cabiao, Nueva Ecija.
— BusinessMirror

House approves HIV, AIDS bill on 3rd and final reading
The House of Representatives yesterday approved on third and final reading a bill that provides for stronger prevention and care policy on human immunodeficiency virus (HIV) and Acquired Immune Deficiency Syndrome, repealing for the purpose the current law on prevention and control of the dreaded disease.
— Manila Bulletin

PHL manufacturers still most bullish in Asean
The Philippine manufacturing sector moved to take advantage of the expected surge in demand during the holidays, as the country’s Purchasing Managers’ Index (PMI) registered the highest reading anew in Southeast Asia in November.
— BusinessMirror

PH leads in RE; seeks investments
The Department of Energy (DOE) will promote the country as location of companies which would use electricity from renewable energy (RE) sources, saying the Philippines is already ahead in the development of cleaner energy in the region.
— Malaya

PHL to insist on ‘fair’agri package at WTO meet
President Duterte’s marching order to the country’s trade negotiators is to see to it that agreements forged at the World Trade Organization (WTO) meeting would not be detrimental to the Philippine farm sector, according to Agriculture Secretary Emmanuel F. Piñol.
— BusinessMirror

Marawi headed for economic boom before siege – COA
Marawi City was a bustling capital of Lanao del Sur province and on its way to economic boom when it was seized by terrorists and left in shambles by a war that also destroyed its people’s hopes and dreams.
— Philstar