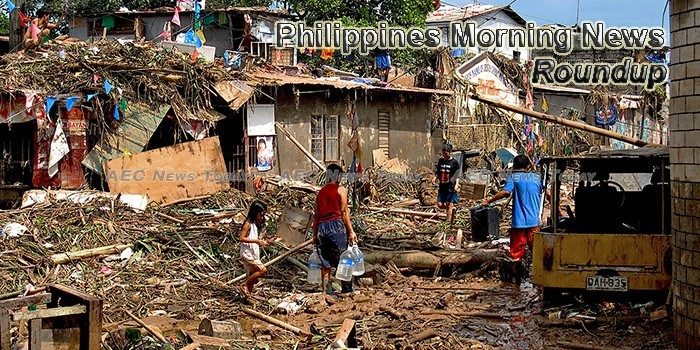 Philippines Business Data Bank launched by DOF, DICT and DILG to streamline application and renewal of business permits
Earlier this month, the Philippines Department of Finance (DOF), along with the Departments of Information and Communications Technology (DICT) and of Interior and Local Government (DILG) launched a digital platform that aims to streamline the application and renewal of business permits through online sharing of information by government agencies involved in the process.
— Open Gov Asia

UN warns of ‘massive’ human rights abuses in southern Philippines
President Rodrigo Duterte placed island of Mindanao under martial law in May after Islamist militants took over the city of Marawi.
— The Globe and Mall

The Philippines’ biggest business deals in 2017
The country’s economic renaissance continued in 2017, and the top dogs of Philippine business – the conglomerates – have taken full advantage.
— Rappler

EU allocates P 34 M for relief assistance to families affected by TS ‘Vinta’
The European Union (EU) on Thursday announced that it is allocating €570,000 (PHP 34 million) in humanitarian funding to deliver emergency relief assistance to families affected by the deadly Tropical Storm Vinta, which wreaked havoc across large parts of Mindanao days before Christmas.
— Manila Bulletin

‘Infrastructure in 17 districts won’t be finished in 2018’
The Duterte administration was warned yesterday that it would not be able to finish roads, bridges and other infrastructure projects in at least 17 legislative districts next year.
— Philstar

Dark Christmas for families of Manila victims
Families of victims of drug-related killings in the Philippines have nothing to celebrate this Christmas but hope that justice will prevail in the end.
— Ucanews

Philippines braces for brewing New Year storm
The National Disaster Risk Reduction and Management Council (NDRRMC) on Thursday said it has prepared for a brewing storm that may enter the country this weekend.
— ABS-CBN

Trade dep’t, export group see double-digit pace of increase in sales to overseas markets
THE DEPARTMENT of Trade and Industry (DTI) and the Philippine Exporters Confederation, Inc. (Philexport) expect overseas sales of the country’s goods and services to increase by double-digit pace next year as major markets continue recovery.
— BusinessWorld

A Philippines grandmother fought to get a toxic coal stockpile out of her neighborhood. Three bullets stopped her
Gloria Capitan couldn’t have imagined her fate. Her cause felt just, and her community was behind her. Besides, who would kill a 57-year-old grandmother?
— Los Angeles Times

Opposition lawmakers question martial law extension at high court
THE HOUSE opposition filed a petition before the Supreme Court on Wednesday challenging the constitutionality of the one-year extension of martial law and the suspension of the writ of habeas corpus in Mindanao.
— The Manila Times

Duterte: Expedite recovery from storm
President Duterte assured the speedy recovery of typhoon-hit Lanao del Norte as he extended condolences to grieving families of those who died in the storm and looked forward with hope to a better new year for all Filipinos.
— Manila Bulletin

Hog-sector output falls as Filipinos eat less pork
Purchase of pork products this holiday season may not be able to drive the local hog sector’s production to reach its year-end volume target, as demand seemed to be lower than usual, resulting in a lower year-on-year total output growth.
— BusinessMirror

House seeks P2,000 travel allowance for govt personnel
THE HOUSE of Representatives has approved a resolution urging the President to increase the daily local travel allowance of government officials and personnel on official business.
— The Manila Times

Gov’t targets 2-4% headline inflation until 2020
THE GOVERNMENT has kept its 2-4% inflation target until 2020, with the central bank seeing that price increases will remain “manageable” despite the expected impact of tax reform.
— BusinessWorld

Developers confident property bubble still not on the horizon
Fortunately for Philippine developers, the sector has at least two reasons not to worry about seeing a property bubble in the near future—the rapidly rising online-gaming industry and the ever-reliable business-process outsourcing (BPO) segment.
— BusinessMirror