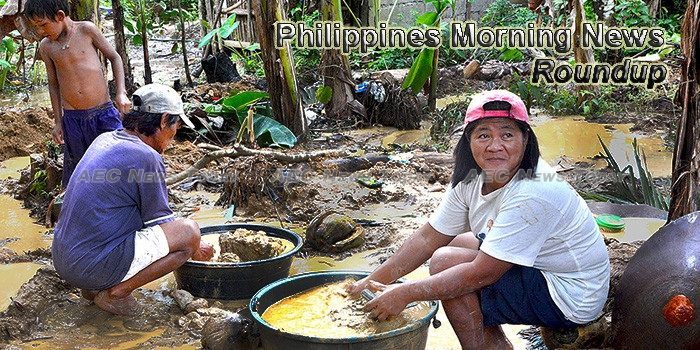 Among Asian currencies, Philippine peso is unloved
Asian emerging-market curren-cies have been having their best year since before the 2013 taper tantrum, bolstered by pace-setting growth rates and attractive yields.
— Business Mirror

Manila seeks $771.3-M fresh ADB financing
The Philippines has proposed some $771.3 million worth of projects for Asian Development Bank (ADB) financing as of the first semester of 2017.
— Business Mirror

US cites PHL for upholding religious freedom, but flags Duterte on church, Hitler comments
THE LEGAL framework of the Philippines, a predominantly Catholic nation, has been considered among those that upheld principles of religious freedom in 2016, the US State Department said in an annual report.
— BusinessWorld Online

P900-billion of goods smuggled in 2011-15 – study
SMUGGLED GOODS worth as much as P900 billion entered the Philippines in a span of five years, a study by the University of Asia and the Pacific (UA&P) revealed.
— BusinessWorld Online

Philippine churches to ring bells to protest drug killings
A leader of the dominant Roman Catholic Church in the Philippines has ordered bells to be tolled every night for three months in a northern region to raise alarm over a renewed police crackdown that has left more than 80 drug and crime suspects dead in just a week.
— Bangkok Post

P18-M loan fund opened to Cebu vegetable farmers
THE DEPARTMENT of Agriculture (DA) will provide an P18-million loan to vegetable farmers in Cebu province, which will not require a collateral and with a 6% annual interest. The loan will be made available to farmers’ cooperatives or a rural bank that will manage the credit, according Agriculture Secretary Emmanuel F. Piñol.
— BusinessWorld Online

Firm grants P1.4-M worth of health insurance to indigents
Philex Mining Corp. granted P1.48 million worth of health insurance to 620 individuals, together with their families this year, bringing to P3.4 million the total amount of coverage given to the indigent residents in the outlying communities of its Padcal mine in this province over the past four years.
— Sun Star

Industry losses from bird flu hit P1.8 B
Just 10 days after the bird flu outbreak in Pampanga, the local poultry industry has lost approximately P1.8 billion in revenue and may not recover anytime soon as the virus has spread to Nueva Ecija, prompting the Department of Agriculture (DA) to delay anew the lifting of the shipment ban nationwide.
— The Philippine Star

Grand Land to pour P6b into VisMin plans
THE real estate arm of the Gaisano Grand group pledged to invest at least P6 billion for housing projects and tourism establishments over the next three years in the Visayas and Mindanao.
— Sun Star

PHL poultry products banned in 3 countries
Japan, South Korea and Singapore have imposed a temporary ban on poultry products and pet birds from the Philippines after Manila confirmed the outbreak of bird flu in Pampanga.
— Business Mirror

2017 BoP deficit forecast could be exceeded
THE Philippines incurred a deeper balance of payments (BoP) deficit of $678 million in July, the widest gap in eight months on account of foreign exchange operations of the Bangko Sentral ng Pilipinas (BSP) and national government debt payments.
— The Manila Times

PAL offers WiFi subscription plans to passenger
Flag carrier Philippine Airlines (PAL) is allowing passengers to use the internet for free for 30 minutes or 15 MB on its flights and to surf longer for the rest of the trip at 50 percent off, as part of improving its service.
— The Philippine Star

Senate majority seeks probe into Kian delos Santos’ death
The Senate majority bloc adopted a resolution calling for a probe into the recent spate of killings in the Duterte administration’s drug war, including the death of 17-year-old Kian Loyd delos Santos, who was shot by police conducting anti-drug operations in Caloocan City.
— Rappler

PSEi may stay above 8,000 this week
he benchmark Philippine Stock Exchange index (PSEi) may continue to fight to stay above the 8,000 mark this week after it reached a new high last week.
— The Philippine Star

P10.2B eyed for MM, Cebu Bus Rapid Transit projects
At least PHP10.2 billion has been allocated in the proposed PHP3.767-trillion national budget for 2018 to finance the Bus Rapid Transit (BRT) systems in Metro Manila and Cebu, a lawmaker at the House of Representatives said on Sunday.
— Philippine News Agency

DPWH spending P160b to ease traffic
The Public Works Department said it is on track toward resolving the traffic woes in Metro Manila in three years as it is spending over P160 billion next year alone for traffic decongestion program.
— Manilastandard.net

PH urged to file protest vs China’s incursions
A maritime and security expert have called on the Philippine government to file a diplomatic protest over China’s apparent incursions into the country’s territorial waters after a dozen of its military and fishing vessels were spotted near Pag-asa Island last week.
— Philippine Daily Inquirer

Not too late for manufacturing (Part II)
The brightest prospects for manufacturing growth in the Philippines are offered by recent developments in the East Asian region. Dr. L. U explained these developments as follows.” “The ascendancy of China in the 1990s, with its vast market and cheap labor, had drawn investments away from the Philippines (and other countries), inspiring the oft-repeated metaphor then of a “giant sucking sound’ as China diverted foreign direct investments to itself and became the world’s factory.
— Manila Bulletin