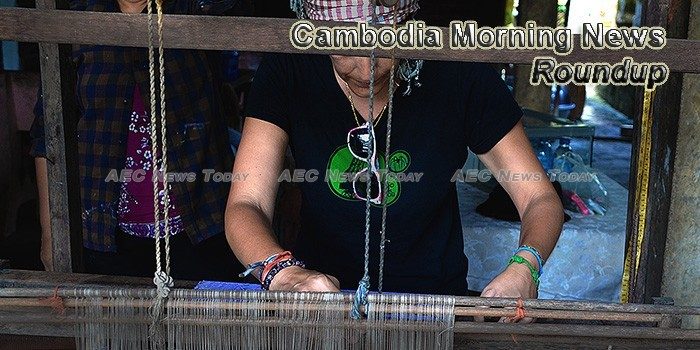 Leaked Letter Fails to Support The Phnom Penh Post Tax Claims
Following our exclusive report last week that Post Media, publisher of the the English- and Khmer-language editions of The Phnom Penh Post, was in dire need of a massive cash injection to meet a tax bill of some US$3.9 million, company executives have been desperately trying to shore up moral and the image of the publication… in the process stripping away the last vestiges of the two publications’ credibility in the process.
— AEC News Today

Cambodian-Canadian engineer pushes to use robots in UXO removal
You won’t find the “freedom to walk” inscribed in any UN conventions or national constitutions, but for 24-year-old Richard Yim, it’s one of the most important rights in the world.
— The Phnom Penh Post

Singapore firm agrees to manage mall in The Peak
Singapore-based CapitaLand has signed an agreement to manage the mall located in Phnom Penh’s The Peak, which is set to open in 2020.
— The Phnom Penh Post

Cambodia Thanks Australia For Agriculture Support
Cambodia reiterated the important role Australia plays in the development of its agriculture sector and urged leaders of the Commonwealth nation to support the modernisation of the industry through investments in modern factories and machinery.
— B2B

UN council to discuss ‘deteriorating’ rights situation in Cambodia
The United Nations Human Rights Council is expected to hear strong criticism of Cambodia’s government at a Thursday meeting in Geneva that will include statements from NGOs concerned about increasing repression of politicians and civil society.
— The Phnom Penh Post

Four adventure activities to get your pulse racing in Cambodia
From scaling rock faces to hurtling through the jungle canopy at high speeds, get your adrenaline rush with these intrepid endeavours.
— SoutheastAsia Globe

International unions urge Education Ministry to reinstate ex-CNRP teachers
Two prominent international unions have written to the Ministry of Education accusing it of illegally firing several employees with ties to the now-dissolved Cambodia National Rescue Party, and asking that the group be reinstated.
— The Phnom Penh Post