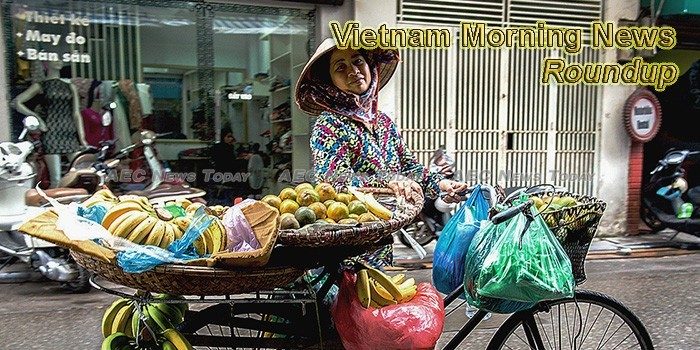 Coal consumption peaks to the highest level in recent years
Coal consumption reached 4.2 million tonnes in May 2018, the highest increase in many years, according to the latest statistics from the Vietnam National Coal and Mineral Industries Group (TKV).
— Nhan Dan Online

Vietnam’s Aviation Industry Continues its Growth Momentum
Vietnam is one of the fastest growing aviation markets in the world, growing by 17.4 percent in the last decade, which was driven by a rise in domestic and foreign travelers as well as the emergence of low-cost carriers.
— Vietnam Briefing

Lychee farming hubs to enter main crop
Lychee growers in the two lychee farming hubs of Vietnam, namely Bac Giang and Hai Duong provinces, are busy with harvesting this season’s first crop of lychees, while preparing for picking the lychees of the fast-approaching main crop scheduled for the next five days.
— Nhan Dan Online

Vietnam bets on success of SEZs: Viet Nam News
Although being late and facing many challenges, Vietnam must dare to play and bet on the success of special economic zones.
— The Straits Times

Hanoi shortens processing time for construction procedures
Hanoi will shorten the time needed to process applications and grant construction permits from 166 days at present to no longer than 120 days in line with a prime minister instructive dated March 13, 2018.
— The Hanoi Times

Newly-registered labourers in May down 24.5 percent
A total of 80,500 workers were registered at newly-established businesses in May, down 24.5 percent year-on-year, according to the General Statistics Office (GSO).
— VietnamPlus

Cameras to be installed at level crossings
Vietnam Railways (VNR) has asked railway companies to install cameras at level-crossing barriers to improve the safety of pedestrians.
— Viet Nam News

Import of low-priced Chinese cars on the rise
According to the latest report from the Vietnam General Department of Customs, 65 cars of below nine seats were imported between May 25 and 31 from China into Vietnam, ranking joint first along with similar models imported from Mexico.
— VietnamNet Bridge

Pilots quit Vietnam Airlines in droves
Vietnam Airlines is flying high in regional rankings as one of the top carriers in Asia, but there are rumblings of discontent among its pilots, who are quitting in significant numbers, citing low pay and benefits.
— VnExpress

Central bank extends deadline to tackle cross-ownership
The State Bank of Vietnam (SBV) has proposed to extend the time limit set for addressing the excessive shareholding for another year until June 30, 2019 through a new draft circular.
— The Hanoi Times

Technology can raise quality of agricultural products
New technologies are key to advancing the agriculture sector in Viet Nam, as they can boost products’ value to make them more competitive on the global market.
— Bizhub

Google Leading Computer Training in Vietnam
In and around the Mekong Delta, school children will spend this summer moving rainbow-colored blocks and cartoon animals around a screen to get an early taste of computers in a program backed by Google.
— VOA

Vietnam only country left without 2018 World Cup broadcasting rights
‘Not at all costs,’ says VTV as fans in football crazy Vietnam hold their breath.
— VnExpress

Forum seeks solutions to expand market for Vietnamese farm produce
A symposium on agriculture themed ‘Solutions to trade development of Vietnamese agricultural products’ was held in Hanoi on June 5 in the aim of promoting public-private dialogues on macroeconomic strategies.
— Nhan Dan Online

Cyclo driver fined for ripping off tourists in central Vietnam
He charged Vietnamese American couple $66 instead of $4 for 6-km ride.
— VnExpress