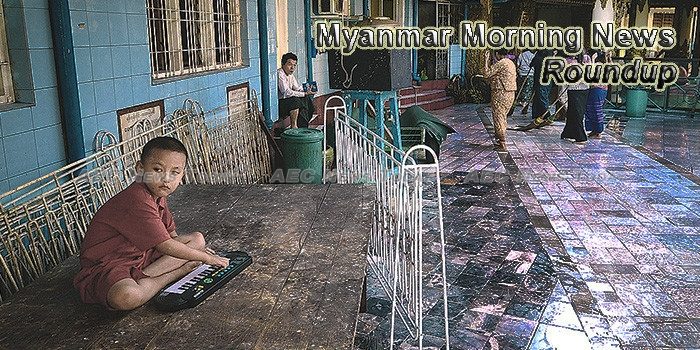 KNU official solicits feedback on planned coal-fired power plant
Got a problem with coal-generated power? A Karen National Union leader is inviting feedback and complaints to be directed to his office as the ethnic armed group eyes giving the greenlight to a costly Thai- and Japan-backed venture.
– Burma News International

Users of prohibited food chemicals penalised
After a surprise check at the Theingyi Market in Yangon in May, many shopkeepers were found to be using prohibited chemical dyes and formalin in food.
– Eleven Myanmar

Blockchain pilots making waves in developing Asia
We’ve all heard the buzz about the potential applications of blockchain technology. But what’s actually happening in developing countries in Asia and the Pacific?
– Eco-Business

Shaking up the logistics industry by building a community of truck drivers
Is Kargo the Uber with trucks? Not quite
– The Myanmar Times

FMI says ‘three pillar’ strategy key to growth
Local company First Myanmar Investment has released its financial results for the 2016-17 fiscal year, announcing that its focus on a “three pillar” strategy has been key to the firm’s growth.
– Frontier Myanmar

Second coordination meeting on setting up owned satellite system held
VICE President U Myint Swe met with personnel concerned for drawing up plans for a Myanmar-owned satellite system at the Ministry of Transport and Communications yesterday, according to a report by Myanmar News Agency.
– Global New Light of Myanmar

Dynamite fishing, drugs, threaten Myanmar’s Moken community
With a swift breath the teenage boy dives into the turquoise waters of southern Myanmar, a spear clutched in his hand, but below him lies nothing but a graveyard of broken, grey coral.
– Frontier Myanmar

Elephant skin for Chinese “medicine”? Stop the killing in Myanmar!
It’s an evil business: Asia’s elephants are being poached for the latest Chinese quack cure: elephant-skin ointments to treat eczema, acne and digestive problems. Speak out for a ban on trade in elephant skin and other body parts!
– Rainforest Rescue (petition)