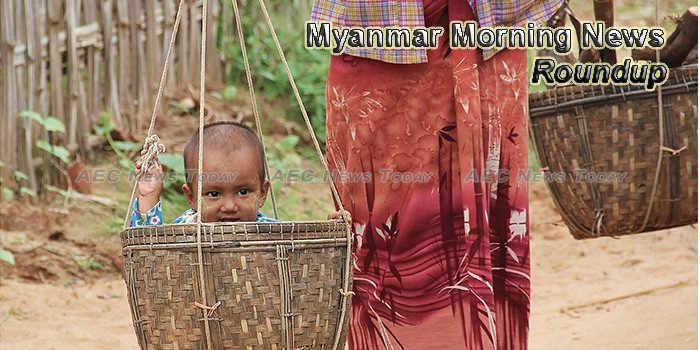 Could US reset sanctions on Myanmar over North Korea?
If Kyaw Zeya, Myanmar’s Ministry of Foreign Affairs permanent secretary, is to be believed, then strategic ties between his country and North Korea are completely severed after years of robust cooperation under military rule.
– Asia Times

Thai trade exceeds $318m
Border trade with Thailand exceeds US$318 million until July 7 of this fiscal year, according to Ministry of Commerce.
– Eleven Myanmar

FDI could exceed MIC’s target in 2017-18, but still lower than previous years’
The Myanmar Investment Commission (MIC) could achieve or even exceed its US$6 billion foreign direct investment target for 2017-18.
– The Myanmar Times

Vice President: Myanmar in top 100 business index by 2020
Vice President U Myint Swe said he wants Myanmar to make the list of the top 100 countries on the World Bank’s Doing Business Index in the next three years.
– Global New Light of Myanmar

Rice and broken rice export projected to total 2 million tons this FY
Myanmar is projected to export 2 million tons of rice this fiscal year, of which more than 600,000 tons have already been exported, according to a report in Myawady Daily newspaper.
– Global New Light of Myanmar

Bean prices fall
The prices of beans have fallen in a month with mung beans now costing Ks930,000 per tonne, according to the Bayintnaung wholesale centre.
– Eleven Myanmar

India Courts Myanmar
New Delhi is seriously considering courting Myanmar, so as to counter China’s influence as well as to urge its leaders to look into the insurgency along the India-Myanmar border.
– The Irrawaddy

Thai smuggling crackdown leaves Myanmar’s Rohingya in limbo
Five years have passed since Hla Hla Sein was forced into a displacement camp in western Myanmar for Rohingya Muslims, where disease and deprivation are rife and armed guards patrol a barbed-wire perimeter.
– Coconuts