Malaysia Morning News For May 31 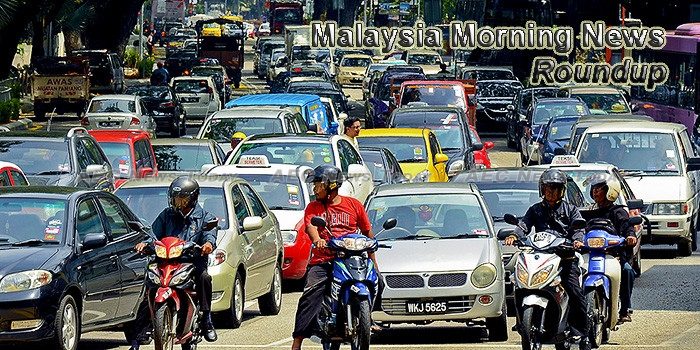 Robbery victim will have tough time suing Uber, lawyers say
Exclusion clauses and Uber’s unique relationship with its drivers could make it difficult for a woman to successfully sue the firm over her robbery on one of its rides, lawyers suggested.
— The Malay Mail Online

Malaysia eager to establish direct flights with Moscow
Malaysia is interested in seeing direct flights launched between Moscow and Kuala Lumpur as “an essential ingredient” towards establishing closer relationship between the capital cities, the Director General of the ASEAN-Malaysia National Secretariat Jojie Samuel told TASS.
— TASS

TAIL BETWEEN THE LEGS AS 1MDB-IPIC PAYMENT NEARS, NAJIB TO MEET BEIJING OVER PORT PROJECTS & BANDAR M’SIA
Malaysia and China are set to hold meetings in the coming days to push ahead with proposals for the construction of three new ports along the Strait of Malacca as well as plans to jointly develop the Bandar Malaysia project tied to troubled state investment fund 1Malaysia Development Berhad (1MDB).
— Malaysia Chronicle

New Silk Road: Demons within, dragons without
We have tended to look at China with starry-eyed fascination, mesmerised by the immense opportunities for investments, trade, and business, not to mention corrupt gain. China has become something of a fairy godmother – for every problem or need there is a Chinese loan, a Chinese project or a Chinese business deal.
— Malaysiakini

EPF gets equity lift
The Employees Provident Fund (EPF) posted a 74% jump in investment income to RM11.8bil in the first quarter ended March 31, as it benefited from rising global stock prices.
— The Star Online

Smoking ban in Selangor parks begins tomorrow
From tomorrow, it will be illegal to light up at public parks in Selangor gazetted as no-smoking zones. This excludes open carpark areas.
— The Star Online

Ugly first impression of Malaysia by visitors at KLIA
THE FIRST impression which you have at the arrivals hall of an international airport is typically the first impression that you will have of the new country you are visiting.
— The Star Online

The new silk road: Demons within, dragons without
While China’s leaders were experimenting with ways to release the creativity, ingenuity and industriousness of all its people, our leaders were stifling it with discriminatory programmes and self-defeating policies.
— Free Malaysia Today

DRB-Hicom narrows Q4 loss to RM328.45mil
DRB-Hicom Bhd has narrowed its net loss for the fourth quarter of financial year 2017 ended March 31, as its top line improved significantly on a year-on-year (yoy) basis.
— The Star Online

Rusnano may set up fund with Malaysian hi-tech company by end of 2017
Rusnano plans to create a fund with Malaysia’s NanoMalaysia Berhad company by the end of this year, Chief Executive Officer of the Russian nanotechnology company Anatoly Chubais told TASS on Tuesday.
— TASS

WHAT COULD WORLD LEADERS LEARN FROM NAJIB TODAY EXCEPT HOW TO STEAL: WHEREAS DURING DR M’S ERA, EVEN IMF SOUGHT HIS INPUT
I just thought that maybe it would be useful to share a little of my perspective of him because he was a minister and later, prime minister during most of my working life.
— Malaysia Chronicle