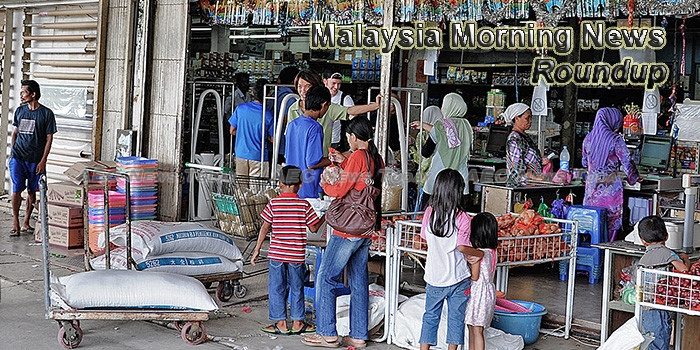 Malaysian merger could open window for ANZ stake sale: sources
ANZ Bank is moving closer to a deal to sell its Malaysian banking stake to a pension fund and exit the South-East Asian nation, sources familiar with the matter said, in a transaction that could be worth around $US900 million ($1.2 billion).
— The Sydney Morning Herald

RM5.88 Bln Disbursed For Sme Sector Development For 2017, Najib
The government has disbursed funds totalling RM5.88 billion for 2017 for the small and medium enterprise (SME) development programmes which are being implemented by 16 ministries and over 60 agencies.
— Malaysian Digest

MO1 sees profits in 1MDB, while auditors see debts
Imams and village development and safety committee (JKKK) heads indeed must correct the misconceptions regarding 1MDB at the grassroots level – misconceptions that have been fabricated and propagated by the media and propaganda units that the government controls.
— Malaysiakini

Global sovereign rating outlook improves, but high debt lingers, says Fitch
The global sovereign credit cycle reached an inflection point at the end of last year and has turned less negative in 2017, according to Fitch Ratings in its mid-year Sovereign Review and Outlook.
— The Edge Markets

Eduspec fixes fifth-tranche placement share price at 15 sen
Eduspec Holdings Bhd, whose shares were actively traded today, has fixed the price for the shares it is issuing under a private placement exercise at 15 sen each.
— The Edge Markets

Axiata confident of bringing back dividends from Nepal
Axiata Group Bhd said yesterday the central bank of Nepal has not responded to a submission to repatriate dividends from Nepali unit Ncell Pvt Ltd and it is confident that Nepal’s government will not stop it from repatriating dividends which rightfully belong to the Malaysian telco.
— The Sun Daily

Electrical & electronics sector key to export rebound
IHS Markit expects the Malaysian gross domestic product (GDP) growth to strengthen from 4.2% in 2016 to 4.9% in 2017, with the strong performance of electrical and electronics manufacturing output being an important factor contributing to country’s export rebound in the first half of the year.
— The Sun Daily

Malaysia’s priority is to manage, not stop, China’s investments
Eyebrows were raised when the South China Morning Post recently claimed that mainland Chinese are migrating to Malaysia “by the thousands”.
— Today Online

Going to Malaysia? 10 things to know before your trip
Malaysia’s cultural diversity is matched only by its phenomenal natural landscapes.
— CNN