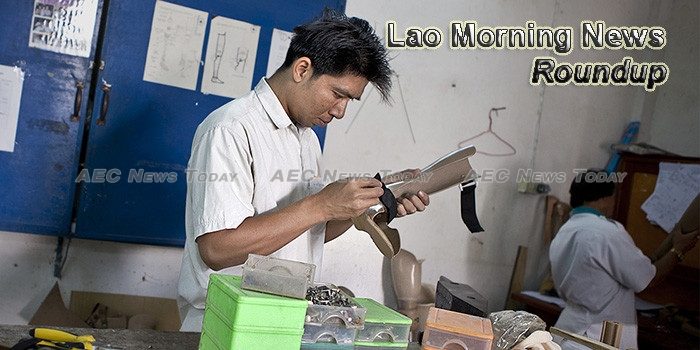 Tourism industry positively impacting poverty reduction
As tourism is the third largest export industry in the world today after chemicals and fuel, Laos is placing greater importance on the development of this industry to boost growth and alleviate poverty.
— Vientiane Times

Lao govt misrepresented legal battle with Thai-Lao Lignite Co
The Lao Ministry of Planning and Investments presents a completely false picture of the facts and legal status of the arbitration, according to the claimant, Thai-Lao Lignite Company Limited (TLL), a company of Thailand’s Nganthavee Group.
— The Nation

Three Thais, Lao accused of smuggling huge haul of meth
Police announced on Wednesday that four men – three Thais and a Lao – had been arrested two days earlier for allegedly smuggling four million methamphetamine pills into the country.
— The Nation

Lao Police Beat Villagers Arrested in Lengthy Land Dispute in Sekong Province
Police in southeastern Laos’ Sekong province have arrested 14 villagers in Thateng district since late July for their involvement in an 11-year-old land conflict, and have brutally assaulted three of them, a relative of the one of the detainees said.
— Radio Free Asia

National Population and Development Policy Discussed
The Department of Planning, Ministry of Planning and Investment, in cooperation with the United Nations Population Fund on Sep 27 in Vientiane Capital held a seminar on the improvement of the national population and development policy.
— Lao News Agency

US supports meals for Lao students
The United States is continuing to support school meal programmes in Laos in an effort to provide children with access to a better nutritional and educational environment.
— Vientiane Times

Laos becomes party to two new int’l treaties
Laos has signed the Convention on the Prohibition of Nuclear Weapons, and become a party to the Minamata Convention on Mercury after depositing its instrument of ratification last week.
— Vientiane Times

Khammuan revokes concessions after multibillion kip deals stall
Mining and forestry investment agreements valued at millions of US dollars have been revoked by Khammuan provincial authorities after private investors failed to carry out the projects within the agreed timeline, it was confirmed yesterday.
— Vientiane Times

NA Officials Enrich Knowledge of Foreign Affairs
Foreign affairs officials of the National Assembly from provincial constituencies across the country are taking part in a workshop on foreign affairs held between Sep 26-28 in Vientiane Province to enrich their knowledge of external policy of the Party and government, bilateral and multilateral diplomacy.
— Lao News Agency