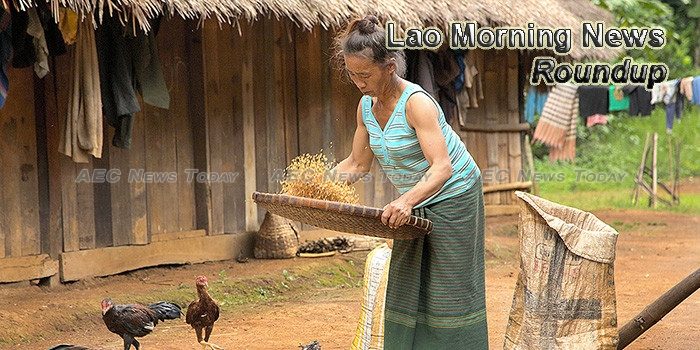 Official aid to increase despite fear of cuts
Official Development Assistance (ODA) to be provided to Laos in 2018 is expected to increase from this year amid concerns about cuts in aid when Laos graduates from Least Developed Country (LDC) status.
— Vientiane Times

France Supports Medical Training Against Communicable Diseases in Laos
The French Embassy in Laos has financed the air tickets of five students for training at the end of September on communicable diseases in Vietnam.
— Lao News Agency

City revs up plans to relocate central bus station
Authorities are expediting work on the design of a new bus station at Lao-ITECC in central Vientiane, with construction expected to take about six months.
— Vientiane Times

PS debacle: company president in police custody
Senior executives at PS Lao Enterprise have been in police custody since Tuesday evening following a heated confrontation with a mob of people who had deposited money with the company, a police source has said.
— Vientiane Times

Leaders Express Sympathy for Damages, Loss Caused by Hurricane Irma
President Bounnhang Vorachit and Prime Minister Thongloun Sisoulith on Sep12 sent a message of sympathy to Comrade Raul Castro Ruz, President of the Councils of State and Ministers of the Republic of Cuba over the damages and loss caused by Hurricane Irma.
— Lao News Agency

Lao Fashion Week Inspires Young Designers
The Lao Fashion Week 2017 was officially launched on Monday at the French Embassy in Vientiane Capital with an aim to raise the profile of young designers.
— Lao News Agency

Under Construction Nam Ao Dam Busts
Many farmlands of people in Thathom district, Xaysomboun Province have been flooded following the bust of the under construction Nam Ao Hydropower Project on Sep 11.
— Lao News Agency

Feature photo ILO in Asia and the Pacific / Adri Berger
Find our previous morning news feature photos in the AEC News Today Morning News Feature Photos gallery where you will find a pictorial display of daily life throughout the Asean Economic Community (AEC).