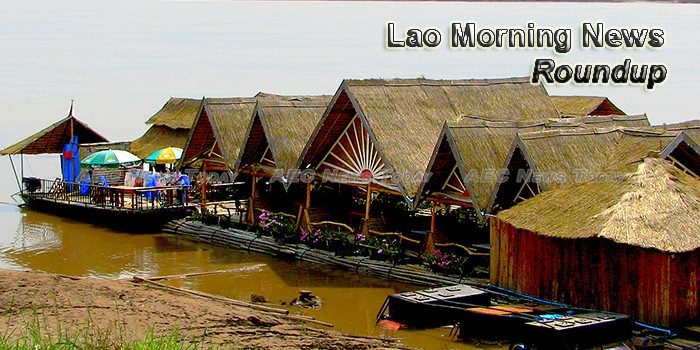 Lao edition of book on Xi Jinping published
China’s State Council Information Office has published the first edition of a book about President Xi Jinping and his policies titled “The Governance of China” in the Lao language.
— Vientiane Times

Front President Receives Lao Diaspora Delegation
President of the Lao Front for National Construction Saysomphone Phomvihane on Nov 9 received in Vientiane a delegation of almost 50 Lao diaspora ​living in the United States led by Mr Khamphouy Maniseng ​as the delegation was on a week-long visit to Laos (Nov 3-11).
— Lao News Agency

Chinese Ophthalmologists Help Lao People Remove Cataracts for Free
300 people, mostly the elderly, with vision impairment will be given free-of-charge cataract surgery by Lao and Chinese ophthalmologists’ teams at Mahosot Hospital in Vientiane Capital, according to an official.
— Lao News Agency

Officials up to speed for Roundtable meeting in Champassak
Government officials and their development partners in charge of preparations for the 2017 Round Table Implementation Meeting to be held in Champassak province on November 22-23 met yesterday to assess the progress of their preparations.
— Vientiane Times

Xi Jinping: The Governance of China Lao Version Publication Launched
The publishing of the internationally recognised book Xi Jinping: The Governance of China in Lao language was launched on Thursday in Vientiane Capital in the presence of Head of the Party Central Committee’s Propaganda and Training Board Kikeo Khaykhamphithoun, and Deputy Head of the State Council Information Office of China Guo Wei Min.
— Lao News Agency

2nd LAO ICT EXPO to Fall Early Next Year
The expo will be the most extensive ICT event, comprising exposition, conference, and summit, as a leading international exhibition promoting growth and development of local ICT industry and in the regional market, Minister of Post and Telecommunications Thansamay Kommasith told a press conference in Vientiane Capital on Nov 8.
— Lao News Agency