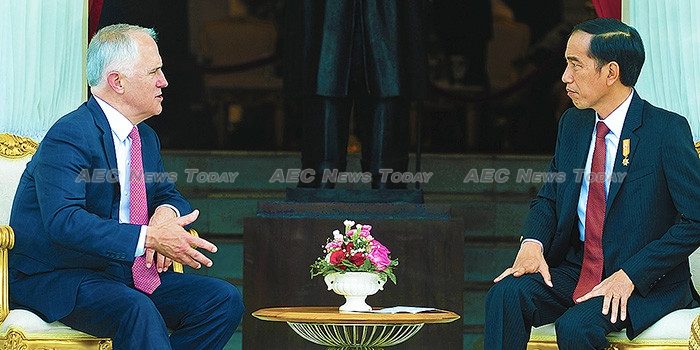 Despite the warmth between Indonesian President Joko ‘Jokowi’ Widodo and Australian Prime Minister Malcolm Turnbull following their February 2017 meeting in Canberra, hopes that the Indonesia–Australia Comprehensive Economic Partnership (IA-CEPA) will achieve a high quality ‘21st century partnership’ should be treated with caution.

Free Trade Agreements (FTAs) are generally evaluated differently by their respective countries. In the case of IA-CEPA, Indonesia maintains formidable barriers to sectors of Australian interest such as agriculture, mining and education. Matthew Busch highlights that announced deals to improve access for Australian sugar and cattle do not confront the daunting market access challenges in Indonesia.

Eve Warburton provides the clearest articulation to date of Jokowi’s approach to economic policy, termed new developmentalism. It is a statist–nationalist mode of thinking focused on ‘infrastructure, deregulation, and de-bureaucratisation’.

The approach is statist because it views state intervention as necessary to accelerate national development, with state-owned enterprises (SOEs) acting as growth locomotives. At the same time, it is nationalist because intervention aims to reduce reliance on foreign capital, build state strength, and safeguard sovereignty.

Clear examples of statist–nationalist policy include capital injections and the awarding of strategic projects to SOEs, as well as plans to establish large holding companies in key industries. Recent moves on beef import licenses and an export ban on unprocessed minerals are further illustrations. Other agendas such as anti-corruption and human rights take a back seat to safeguard the political equilibrium created by the administration to accelerate growth.

The statist–nationalist approach is oriented towards delivering short-term victories in the form of tangible economic outcomes. There is speculation that one of the reasons the Jakarta–Bandung high-speed rail project was awarded to Chinese developers over a Japanese company was the former’s promise to deliver results before the next election, with construction to finish in 2018 and the line operational in 2019.

By extending these priorities into international economy policy, how Jokowi views FTAs can be discerned. The overarching goals are growth and development, with an emphasis on export market access. Imports should be controlled since they are perceived as undermining local industry and productivity. Liberalisation is viewed as a last resort for attracting foreign direct investment, and only allowed if not overtly disruptive, especially to political stability.

Foreign policy and geopolitics will not factor much into FTA calculations.What do these priorities mean for Jakarta’s trade agreement prospects with Canberra and its participation in the region’s multilateral negotiations?

First, the IA-CEPA will likely fall short. It is unlikely that the agreement’s scope and commitments will be comprehensive enough. Australia’s interests in agricultural exports and mining investment will run against powerful and entrenched Indonesian interests, a clash where the latter will most likely carry the day.

This calculus could be different if Australia offers meaningful concessions, such as by opening up its labour market for Indonesian migrant workers. Yet even such enticement will not amount to much without significant skills and language training on Indonesia’s part.

It is likely that notions of economic sovereignty and self-sufficiency will prevail, especially if powerful actors in the agriculture and mining industry are considered necessary allies to maintain the political equilibrium.

Second, the statist–nationalist approach clearly indicates where Indonesia under Jokowi lies with respect to multilateral trade negotiations in the Asia Pacific.

As the dust settles on the death of the Trans-Pacific Partnership (TPP), Japan and Australia will be keen to ensure that the RCEP includes higher commitments on things like services and investment. China on the other hand is keen to secure an early deal by the end of 2017 that primarily involves reducing tariffs.

Jokowi’s approach suggests Jakarta will lean towards Beijing in the contest to shape a trade pact that will cover a third of the world economy and half its population.

Without the lure of a large market that it currently does not have an FTA with — such as the US market which previously was offered by the TPP — Indonesia is in no rush to bind itself to a high-commitment agreement and will be wary of allowing the RCEP to evolve into such.

Prospects do not therefore seem rosy for those hoping Indonesia will enact meaningful reforms initiated by an FTA, be it through the IA-CEPA or the RCEP. Grounding expectations for both is in order.

This article was written by Rocky Intan, a researcher at the Centre for Strategic and International Studies (CSIS), Jakarta. It first appeared on East Asia Forum under a Creative Commons license and is reproduced here with its permission.