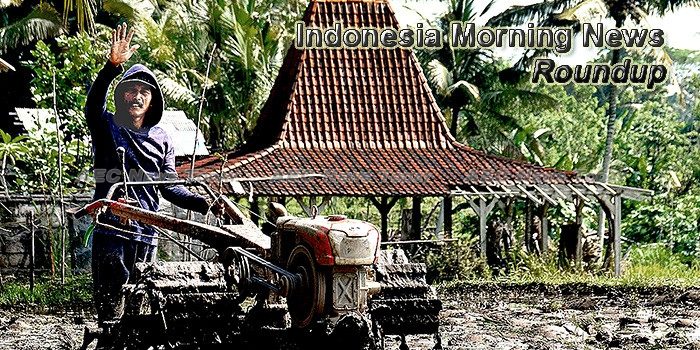 Indonesia warns of more cyberattack havoc as business week starts
The Indonesian government said the global cyberattack that takes computer data hostage is likely to cause more havoc when offices reopen for business.
– The Star Online

Meikarta Breaks MURI Record for Biggest Apartment Sale
he grand launching of the Meikarta apartments sale has broken the record of Indonesia’s Museum of Records, or MURI, for the largest number of buyers in one day.
– Jakarta Globe

Indonesia‘s Economic Growth Blows Optimism in World Business
Indonesia’s economic progress in various aspects, including in consumer indexes, has given an impetus to the business sector in the country.
– Netralnews

Sustainable Tourism in the Spotlight of Upcoming Conference
Efforts to promote and develop sustainable tourism will be highlighted at the 6th International Conference on Tourism Statistics in June, during which leaders of the international tourism industry will discuss policy initiatives and improvements in measuring and tracking its progress.
– Jakarta Globe

Jokowi seeks infrastructure investors at China summit
President Joko “Jokowi” Widodo is scheduled to attend the Belt and Road Forum in Beijing, China, from May 14 to 15 to increase investment in infrastructure development in Indonesia.
– The Jakarta Post

Renewed Consolidation Tipped For Indonesia Shares
The Indonesia stock market on Friday ended the two-day slide in which it had surrendered more than 50 points or 0.9 percent. The Jakarta Composite Index now rests just above the 5,675-point plateau although it may head south again on Monday.
– Nasdaq/ RTT News

Indonesian IT Ministry issues steps for protection against WannaCry ransomware
People all around the world are taking extra precautionary steps to protect their computers from the WannaCry ransomware program, which, according to latest reports, has attacked more than 200,000 devices worldwide in around 150 countries, including two major hospitals in Indonesia.
– Coconuts Jakarta

Palm oil exports increase by 23.5 percent in Q1
Exports of palm oil products increased by 23.5 percent year-on-year (yoy) to 8.02 million tons in the first quarter of this year, data from the Indonesia Association of Oil Palm Producers (GAPKI) shows.
– The Jakarta Post

A setback for Indonesia
It was not too far back that progressive thinkers in Southeast Asia looked up to Indonesia with high hopes.
– The Nation

Sandiaga Calls on Jakartans to Fight against Tobacco Industry
akarta Deputy Governor-elect Sandiaga Uno has called on Jakartans to fight against the tobacco industry. He also urges the people to unite following the end of Jakarta gubernatorial election.
– TEMPO

Indonesia coal output seen growing up to 5 pct this year and next -industry association
Indonesia, the world’s top thermal coal exporter, could increase production of the fuel used in power stations by 5 percent in 2017 and 2018, the country’s leading coal industry association said on Sunday.
– Reuters