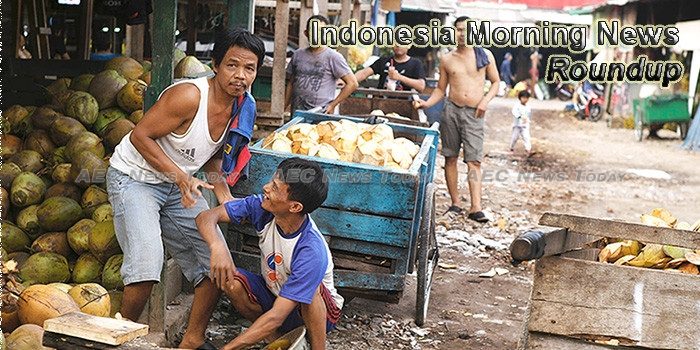 Indonesia’s Parliament speaker named corruption suspect
Indonesia’s anti-graft agency announced Monday that the speaker of Parliament is a suspect in a corruption scandal in which officials allegedly pocketed more than $170 million in government money.
— Independent.ie

Indonesia Exports, Imports Contract in June
Indonesia’s exports and imports contracted in June on a yearly basis for the first time in nine months, data from the statistics bureau showed, but the country still posted a trade surplus.
— Jakarta Globe

Indonesian construction sector to grow strongly
Indonesian construction will grow by rapidly to 2021, according to latest analysis by BMI Research. Although down on original estimates, “the scale of Indonesia’s industry means that even a growth rate aligning with the regional average represents significant additional value created.”
— World Cement

Foreign investment in Indonesia
Indonesia is the largest economy in Southeast Asia. It is rich in natural resources, such as coal, minerals and metals, oil and gas, and agricultural products such as rice, rubber and cocoa. With the fourth biggest population in the world, and a growing middle class, it is expected that Indonesia’s economy will continue to grow.
— JD Supra (press release)

Indonesia rejects return of citizens joining Daish in Syria
The Indonesian government has rejected the return or repatriation of the country’s nationals nabbed in Syria who were involved in activities of the Daish terrorist group, China’s Xinhua news agency reported.
— Astro Awani

285 flights to carry 221,000 Hajj pilgrims from Indonesia beginning July 27
As many as 285 wide body air carriers run by Indonesia’s flag carrier Garuda Indonesia will start carrying a total of 221,000 Haj pilgrims from the island country which has the largest population of Muslims in the world.
— ummid.com

China Top Export Destination for Non-oil: BPS
The Central Statistics Agency (BPS) announced that in the first half of 2017 China is still Indonesia’s number one export destination for non-oil and gas commodities. The export value reaches US$9.13 billion, accounting for 12.61 percent of the total export.
— Tempo.co

Indonesia mulls screening measures for Telegram for access to be restored
Indonesian authorities could restore access to Telegram – provided certain conditions are met – after blocking access to the messaging service last Friday, citing concerns that it was being used to spread “radical and terrorist propaganda”.
— Channel NewsAsia

Medco Shares Soar on Monday After Macmahon Acquisition Announcement
Shares of Jakarta-listed oil and gas company Medco Energi Internasional soared on Monday (17/07), as it announced an acquisition of a majority stake in an Australian mining contractor, and as investors were upbeat on the company’s financial performance.
— Jakarta Globe

Public middle school in East Java denies entrance to non-Muslim student for not wearing hijab
Since the fall of Suharto’s New Order regime, more and more Indonesian women have chosen to use the hijab as a way to outwardly express their Islamic faith and identity. But in many parts of the increasingly conservative country, the choice has turned into a requirement as sharia-influenced bylaws have been passed in many regions which require Muslim civil servants and students to wear them. In some areas like Aceh, even non-Muslim females are required to use the hijab.
— Coconuts Jakarta