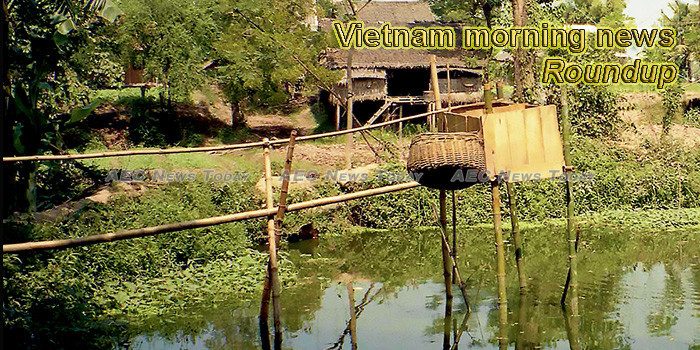 500 Startups To Fund More Vietnamese Tech Startups
Silicon Valley venture capital firm 500 Startups has raised $14.1 million for the new seed-stage fund of its Vietnamese unit, 40 per cent over its $10 million target, it announced in a blog post November 20.
— Investvine

Vietnam extends e-visa granting to foreigners
Thanks to this policy, the number of foreign visitors to Vietnam has been growing fast over the past three years.
— The Hanoi Times

CPTPP takes effect, but challenges remain
Vietnam’s approval of the long-awaited Comprehensive and Progressive Agreement for Trans-Pacific Partnership will make it more convenient for businesses in Vietnam to boost exports and imports and furthering the economy’s growth.
— Nhan Dan Online

False alarm on Vietjet flight leaves passengers praying for their lives
Panic erupted on a passenger flight of Vietnamese airline Vietjet on Monday when an alarm sounded minutes after take-off from an airport in Ho Chi Minh City, forcing it to return to the airport for a check.
— Vietnam Insider

Chinese rice importers visit Việt Nam to find new partners
Chinese importers of rice have arrived in HCM City and Long An Province to find trading opportunities with Vietnamese counterparts, according to the Ministry of Industry and Trade’s Import-Export Department.
— Viet Nam News

Will Samsung set up a third smartphone facility in Vietnam?
If a third Samsung facility is built, Vietnam will be involved more deeply in Samsung’s huge supply chain, according to Nguyen Van Toan, deputy chair of the Vietnam Association of Foreign Invested Enterprises (VAFIEs).
— Vietnam Insider

Vietnam, India aim for US$15 billion bilateral trade volume by 2020
The two-way trade revenue between Vietnam and India is on course to increase and is expected to hit US$15 billion by 2020, heard the Vietnam India Business Forum, held in Hanoi, on November 19.
— Nhan Dan Online

Hanoi, Ho Chi Minh City lag behind in SOE privatization
It would be challenging to fulfill the government’s plan of selling SOEs in 2018, in which at least 85 state firms must complete the transference to private hands by the end of this year.
— The Hanoi Times

Loopholes make Vietnam farm produce vulnerable to counterfeiting
The Ministry of Industry and Trade has written to the Government Office, highlighting major loopholes that could make it easy for Chinese products to bear Made-in-Vietnam labels.
— VietnamNet Bridge

Vietnam should consider high growth firm-focused policy to boost economic performance: WB
High-growth firms in emerging economies, including Vietnam, account for more than 50% of all new jobs and sales despite making up less than 20% of all firms in manufacturing and services.
— The Hanoi Times

SOE equitisation, divestment fall short of target: Ministry
Only 11 State-owned enterprises (SOEs) were equitised in the first nine months of this year, making the country’s target to complete the equitisation of at least 85 SOEs this year unlikely to reach, according to an official from the Ministry of Finance (MoF).
— VietnamPlus

Expectations from centralised state capital management
As planned, the transfer of state ownership of Vietnam’s 19 leading corporations and groups from five ministries to the Committee for Management of State Capital in Enterprises has been completed after the committee officially came into operation.
— Nhan Dan Online

Dong Thap rice farmers switch to other crops, incomes rise
Farmers in the Mekong Delta province of Dong Thap have begun to use more than 3,000ha of low-yield rice fields for growing fruits and other crops this year.
— VietnamPlus

Four key industries in HCM City see positive growth
HCM City’s Index of Industrial Production (IIP) in the first 10 months of the year increased by nearly 8 per cent compared to the same period last year, propped up by high growth of electronic equipment and machinery.
— Bizhub

Vietnam’s bond market records growth of 15.7% to US$53 billion in Q3
The figure was boosted mainly by the 5.2% on-quarter and 14.7% yearly expansion in the government bond market to US$49.0 billion.
— The Hanoi Times

Non-profit schools on the rise
Despite early concerns about its feasibility, non-profit education is gaining ground in Vietnam with both foreign and domestic investors flocking to the burgeoning sector.
— Vietnam Insider