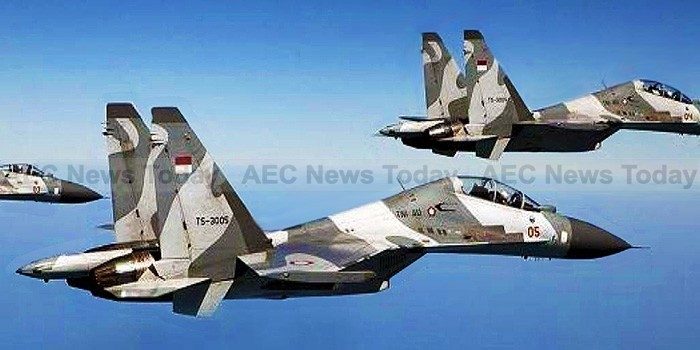 With its well-equipped and highly-trained land, sea, and air forces Indonesia sits at the apex of Asean in terms of military might, easily besting the nine other Asean Community (AC) members. With a population of almost 261 million and a GDP of $936.243 billion, Indonesia’s position as Asean’s military might probably comes as no surprise to some. That it ranks higher than Asia-Pacific regional military heavyweight Australia is probably news to many though.

The findings are in the latest Global Firepower 2016 Ranking (GFP 2016 Ranking), which places the Indonesian National Armed Forces – Tentara Nasional Indonesia (TNI) – at number 14 in the world, three positions ahead of Vietnam at 17th globally, and six places ahead of Thailand at number 20. Australia trails a distant nine places behind with its armed forces ranked 23 globally.

Assessed on more than 50 factors, the GFP 2016 Ranking takes into account available manpower, the amount and mix of equipment in a nation’s arsenal, military budget, total labor force, access to strategic assets, and current economic condition. Of the 126 countries covered by the GFP 2016 ranking, nine of them are in Asean. Nuclear capabilities and current political/military leadership are not included in the calculation, while landlocked countries are not penalised for having no navy. Countries with bigger populations tend to rank higher, but the method used also allows smaller, though more technologically advanced countries to compete with larger, less developed ones.

Indonesia has an armory that includes some of the most modern and formidable weapons systems from the West and Russia. Its arsenal includes 420 aircraft of all types, 152 helicopters, 221 naval ships, 468 tanks, 1,089 armoured fighting vehicles (AFVs), and 80 towed artillery. GFP 2016 country-by-country data shows Indonesia fields some 476,000 active military personnel, the largest active military force in all of Asean, supported by some 400,000 active reservists.

In the air the Indonesia’s Air Force is no less formidable Headlined by 16 top-of-the-line Russian-made Sukhoi-27/30 jets, which are among the best fighter jets in the world, complimented by 36 US-made F-16s that carry one of the best records among fighter-interceptors worldwide.

On the water Indonesia’s military might is no less impressive. Comprising 18 major warships, including two submarines, six frigates, and ten corvettes, Indonesia’s naval fleet also includes 39 warships from the former East German Navy that it acquired after German reunification.

While the the Indonesian Navy’s best assets are currently two aging German-made Type 209 submarines due to be decommissioned in 2020, it has ordered three Type 209/1400 Chang Bogo-Class diesel attack submarines from Korean defense company Daewoo Shipbuilding and Marine Engineering (DSME) to replace them, and is mulling the purchase of an additional three submarines in addition to guided missile frigates and missile boats.

On the ground the Indonesian Army is spearheaded by German-made Leopard II RI main battle tanks, one of the best tanks in the world, with some 16 of the 42 ordered having already been delivered. Indonesia is also equipped with advanced BTR-4M amphibious armored personnel carriers from Ukraine.

Since its founding in 1947 the Indonesian military has largely faced and tackled internal threats. It fought local insurgencies in Aceh, West Papua,  and in its former territory of East Timor, now known as Timor Leste, which it invaded in 1975. The Indonesian military also faced off against Malaysian and Commonwealth forces during the Indonesia-Malaysia ‘Konfrontasi’ in the 1960’s.

With its long history of fighting and defeating world military powers – France, China, and the United States – the Vietnamese military continues to be a formidable military power in the region. Second highest ranked in the region until 2014 when it was overtaken by Thailand, the Vietnam military machine this year regained its position as the second highest ranked military force in Asean, with a GFP 2016 global ranking of 17.

While the majority of its arsenal is old Soviet-made aircraft, the Vietnam People’s Air Force also possesses a number of modern Russian-made aircraft, including ten Su-27 and 32 Su-30MKTs, supported by an aging fleet of 144 MiG-21 Fishbeds, and 38 Su-22 Fitter attack aircraft.

Though battle-hardened and still one of the world’s most powerful, Vietnam’s Army is equipped with aging Soviet-era equipment such as T-62 and T-55 main battle tanks. Vietnam is currently negotiating to buy modern Russian T-90 main battle tanks, but no announcements have been made.

Famous for the destruction they caused to the US Air Force during the US-Vietnam war, Vietnam’s air defense system has been upgraded to Russian S-300 long range surface to air missiles (SAMs), considered to be one of the best SAM systems globally. Negotiations are said to be underway to buy the more advanced S-400 Triumph (S-400 Triumf) air defence system.

Not as aged as its tanks or aircraft is the Vietnam People’s Navy where the cream of the crop is six Russian improved Kilo-Class submarines and four Gepard-Class frigates. The Vietnam Navy is also equipped with Russian Molniya-Class missile boats, Petya-Class frigates, and Tarantul I-Class corvettes.

While Vietnam has not been in a major conflict since it withdrew its forces from Cambodia in 1989 there remains a simmering dispute with China over territorial claims in the South China Sea which has seen Vietnam acquire more weapons from abroad in an effort to maintain the military balance in the area.

Thailand: An Aircraft Carrier With no Aircraft

While junta-ruled Thailand comes with the distinction as being the only nation in the region with an aircraft carrier, the Spanish-made HTMS Chakri Naruebet hasn not carried any aircraft since its complement of AV-8S Matador (Harrier) V/STOL aircraft were withdrawn from service in 2006, while budget cuts keep it docked for all but one day a month.

Most formidable is the Royal Thai Air Force (RTAF) whose assets are 40 F-16s and eight Swedish-built Saab JAS-39 Gripen multi-role aircraft. Thailand is also the only country in Asean that operates an advanced warning and control system (AWACS), with two Saab 340 AEW&C from Sweden. The Thai Air Force is also equipped with F-5E fighters and French-German Alpha Jets.

The Royal Thai Army (RTA) is led by T-84 Oplot-M battle tanks from the Ukraine, however only ten of the 49 ordered have been delivered so far. Thailand has also ordered 28 Chinese NORINCO MBT 3000 battle tanks.

Aside from its lone aircraft carrier, the Royal Thai Navy (RTN) also operates Knox-Class guided missile frigates from the US, and Type 025T and Type 053HT missile frigates from China. Thailand plans to acquire three modified Chinese Yuan-Class submarines for $1.3 billion (See: Subplots in Thailand Submarine Setback), though no firm delivery timetable has been announced.

The Thai military fought-off repeated Vietnamese incursions in the 1980s. After the Cambodian conflict ended, the Thai military has mostly faced local insurgents, notably Muslim rebels in the south of the country. A brief border war erupted between Thailand and Cambodia in 2008 and 2011 over the Preah Vihear Temple. It has also been deployed several times in the last few years with deadly effect against anti-government protesters, and formed the backbone of the 2014 military coup d’état the removed the democratically elected government of Yingluck Shinawatra in 2014.

Cambodia, Laos Are The Weakest Militarily

Cambodia and landlocked northern neighbour Laos possess the weakest military in Asean according to GFP 2016 which ranked ranked Cambodia 88th, and Lao PDR at 121st place.

The Royal Cambodian Air Force (RCAF) currently does not possess a single fighter/interceptor. It formerly had 21 Soviet-built MiG-21’s, but these have not flown for sometime due to their deteriorating conditions and lack of spare parts. Cambodia tried to have them refurbished in Israel several years ago, but it did not pursue the deal because of lack of money. The RCAF also operates Chinese-made Z-9 Harbin (a licensed copy of the French Dauphin) helicopters.

Though it is also saddled by aging equipment, the Royal Cambodian Army (RCA) is in better shape and has acquitted itself well during recent border skirmishes with Thailand. The Army’s main equipment includes more than 300 Soviet-built T-55 main battle tanks.

Comprising just 30,000 active personnel and 100,000 reservists, the Lao People’s Armed Forces (LPAF) is the regions smallest. Its military inventory includes 17 aircraft, 14 helicopters, 55 battle tanks, 185 armoured cars, and 149 towed artillery. It has a small riverine naval force with 52 river patrol boats that operate in the Mekong River.The Lao military, which enjoys a close relationship with its counterpart in neighbouring Vietnam, has largely kept itself to small-scale counter-insurgency operations against Hmong rebels and occasional border skirmishes with Thailand since the end of the Vietnam War.

Not surprisingly Asean’s wealthiest nation  is also its top defense spender. Singapore allocated $9.7 billion for defense in 2016. The amount is 6.4 per cent higher than the previous year’s defence spending and represents 3.4 per cent of its gross domestic product (GDP).However, despite all of its spending GFP 2016 ranks the island city-state at number 64 globally, despite its 1,260,000 armed forces and 2,110,000 reservists.

Other big military spenders in the region were Indonesia at $6.9 billion, followed by Thailand at $5.3 billion, Malaysia $4.7 billion, Vietnam $3.3 billion, Philippines $3 billion, and Myanmar at $2.4 billion. The lowest military expenditures for 2016 among Asean countries was recorded by Cambodia at $192 million and Laos at $18.5 million.