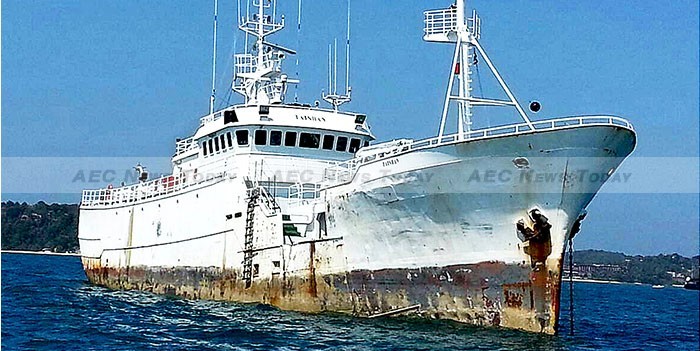 The Royal Thai Navy (RTN) has commenced an air and sea search for the rogue fishing ship the Taishan (also known as the Kunlun) which abruptly weighed anchor and fled the Port of Phuket on Wednesday.

Contacted late on Wednesday evening a RTN Command Center to Combat Illegal Fishing (CCCIF) officer who cannot be named as he was not authorised to speak to the media said sea and air resources including Dornier Do 228 aircraft had been dispatched to search for the rogue fishing ship.

The RTN operates seven Dornier 228s while the CCCIF commands at least six offshore patrol vessels for combating illegal, unreported and unregulated (IUU) fishing. It is also reported to be coordinating resources from the Marine Department, the Department of fisheries (DoF) and the Marine Police division of the Royal Thai Police (RTP).

The rusting 625-ton Taishan (Kunlun) as it is currently named has a history plundering the ocean of valuable toothfish, which can grow up to 120kg (265 lbs) and fetch thousands of dollars each,  dating back some 42-years.

According to the Los Angeles Times the rogue fishing ship has be known by many names: Kunlun, Chang Bai, Hongshui,  Corvus, Galaxy, Red Moon and the Dorita. In addition it has been known to fly the flags of Equatorial Guinea, Indonesia, Tanzania, North Korea, Panama and Sierra Leone.

Local media reports said that the Taishan (Kunlun) slipped its mooring and fled after some 182 tons of illegally caught Patagonian toothfish, a species of cod icefish found in cold waters and worth millions of dollars, was returned to it after storage fees were paid. Not so though said the RTN officer.

“The unregulated fishing of the Taishan (Kunlun) is not illegal under the laws of Thailand applicable to the high seas, but we have tried our best to accommodate. We enforced the Thai Customs Act to punish the Taishan‘s (Kunlun’s) captain for falsely declaring its cargo when passing through the port-in custom’s check. When the rogue fishing ship entered the Port of Phuket in March it declared its cargo as  182 tons of grouper worth about Bt15 million (about US$414,400*), when it fact it was toothfish worth about Bt179 million ($4.945 million*).

“We seized the goods and later the vessel’s operator paid the fine and had right to claim their fish in accordance with the law. Under Thai customs law we can’t seize the vessel as an exhibit”, he said.

However, because the rogue fishing ship was involved in IUU fishing activities the officer said the “CCCIF had prohibited it from leaving port” under Thailand’s recently introduced port in port out (PIPO) regulations. “Until it fled Wednesday Maritime Law was being enforced”, he added.

In a media release issued by The Sea Shepherd Conservation Society whose vessel the Sam Simon pursued the rogue fishing ship out of its Southern Ocean poaching grounds for eight days in February when it was known as the Kunlun, the group called on Australia and New Zealand to help ensure the rogue fishing ship didn’t once again disappear.

‘In recent months Thailand has shown willingness to clean up its waters and drive out illegal, unreported, unregulated (IUU) fishers. However, without support from its wealthier Pacific neighbours it appears that their efforts might fall short.

Sea Shepherd Australia chairman, Captain Peter Hammarstedt, said we call on the Australian and New Zealand authorities and the relevant international enforcement agencies to ensure the missing Interpol Purple-listed toothfish-poaching vessel, Taishan, does not disappear after going on the run from Thailand.

“When we criticised Australia and New Zealand for not arresting the Kunlun (Taishan) at sea, authorities in those two countries assured the international community that the most effective tool in the fight against these poachers was port state controls.

“As the Taishan (Kunlun) has now escaped from Thailand with its illegal catch in-tow, we are seeing this blunder for what it really is. Australia and New Zealand’s unwillingness to arrest the Kunlun (Taishan) and seize its catch at sea has allowed this poaching operation to continue, and to profit from its crimes.

“If the vessel had been arrested by Australia or New Zealand, the catch would never have been returned. Unless this Kunlun (Taishan) is found and arrested again, we expect another 182 tons of toothfish being traded the same way”.

While the Thai navy says it is actively searching for the rogue fishing ship and that the air search will continue at sunrise, if the Taishan (Kunlun) enters the territorial waters of neighbouring countries who do not comply with the European Union rules on IUU fishing there is little that can be done unless those countries chase it back into international or Thai territorial waters.

“We are searching for the Taishan (Kunlun) and will apprehend it and bring it back to Phuket if we can”, the Thai navy officer told AEC News Today.

*Thai baht to US dollar conversions at current rates