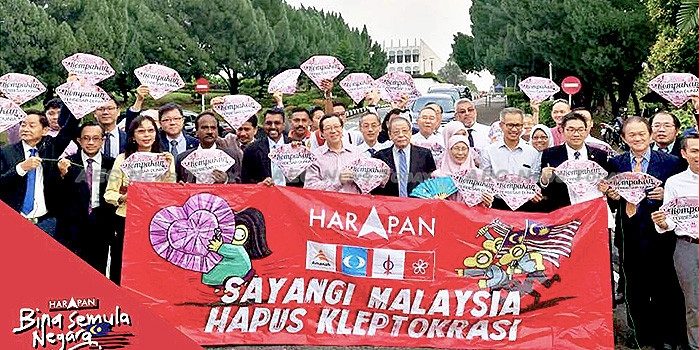 Malaysia’s opposition coalition,  (PH), is busy preparing its manifesto for the 14th Malaysia General Election (GE14) which must be held by August 2018 at the latest. PH cannot afford to repeat past mistakes and publish a strategically ambiguous election manifesto as a simple public relations exercise — it needs to produce a transition pact that clearly spells out what its victory would change and what it would not.

Malaysia is a one-party state which has been ruled by the Malay-nationalist United Malays National Organisation (UMNO) and its coalition partners since independence from Britain in 1957. Malaysia is also a polarised society where the majority Malay-Muslims and the minority Chinese, Indian and Bornean non-Muslims have largely opposing views on Islamisation and pro Malay-Muslim preferential policies.

This fundamental contradiction has helped UMNO’s party-state to survive previous challenges since the opposition has never been able to win favour with both blocs.

Looking toward the coming election PH is aiming to win more Malay votes. The inclusion of Mahathir Mohamad (formerly of UMNO and prime minister between 1981 and 2003) as PH’s new chairman is a game changer. He fills the void left by the Pan-Malaysia Islamic Party (PAS) which now collaborates with UMNO to pursue its agenda to expand Syariah (sharia).

Many now hope for a tsunami of Malay voters to sweep UMNO away. But there is a catch to such optimism: communal incoordination risks foiling the opposition coalition once again.

Given UMNO’s further shift to ultra-nationalism after 2013, Chinese votes appear unlikely to swing back to BN. But with Mahathir evading talk of concrete reforms, many Chinese who fear PH turning into a BN 2.0 may stay home on election day offsetting any potential Malay swing to PH.

Previous opposition coalitions have tried this sort of strategic ambiguity before. Instead of taking clear positions on Islamisation and the pro-Malaya New Economic Policy, they seized upon salient issues such as corruption and good governance. But ambiguity is neither strategic nor possible this time around. UMNO will continue — with the Pan-Malaysian Islamic Party’s help — to warn Malays that both Islam and Muslims are under threat. If PH responds by leaning towards the Malays, more Chinese votes risk being lost.

Beyond populist and catch-all promises like repealing the Goods and Services Tax (GST), a better strategy for PH would be to enter into a transition pact with citizenry on how it would manage regime change should it win. Such a pact should separate the pro-Malay/Muslim policies which UMNO holds its ethnic constituency at ransom with from the party-state, dismantle those features of the political system which prevent genuine electoral competition and enable corruption, and find better alternatives in inter-communal policies.

In terms of making politics competitive, both the authoritarian and majoritarian features of the party-state need to be eliminated.

To dismantle authoritarianism three institutional reforms are indispensable. First, civil and political liberties must be reinforced to emphasise the freedoms of expression, assembly and association. PH must also commit to media freedom and to no detention without trial.

Second, there must be judicial and prosecutorial reforms regarding the appointment, promotion and retirement of judges, as well as the establishment of an independent prosecution separate from the attorney general.

Third, political impartiality of the state apparatus — bureaucracy, police and the military — must be enforced. State agencies and officials must be checked by independent anti-corruption and ombudsman institutions with real regulatory teeth. Such reforms may produce a majoritarian democracy, but leaves the risk of democratic winner-takes-all politics which will likely further tear at Malaysia’s bipolar social wounds. Hence, two more institutional reforms are needed to dismantle majoritarianism.

First, electoral, parliamentary and cabinet reforms must be enacted — this includes a more proportional electoral system and a term limit on the prime ministership. Powers need to be devolved to the states, the senate should be directly elected and local elections restored. These reforms will end a concentration of power at the top of the leadership, the root cause of the 1MDB scandal.

At the same time, PH should also promise to avoid sweeping change without national consensus on divisive issues like the pro-Malay ethnic preferential policy, Islamisation, as well as language and education.

These issues should be deliberated by broad-based consultative bodies to produce new policy alternatives, which may be modified to become party manifestos in the 15th Malaysian General Election (GE15).

Instead of repeating ‘strategic ambiguity’, PH should make clear that GE14 will only be a ‘transition election’ from the party-state while the ‘founding election’ for a new Malaysia will be GE15, when the playing field is level.

With the right balance of change and continuity guided principally by a two-stage road-map, there is hope that PH may just garner enough Malay and non-Malay voters to end UMNO’s corrupt party-state.

This article was written by Wong Chin Huat,  Head of Political Studies at Penang Institute. It first appeared on East Asia Forum under a Creative Commons license  and is reproduced here with its permission.