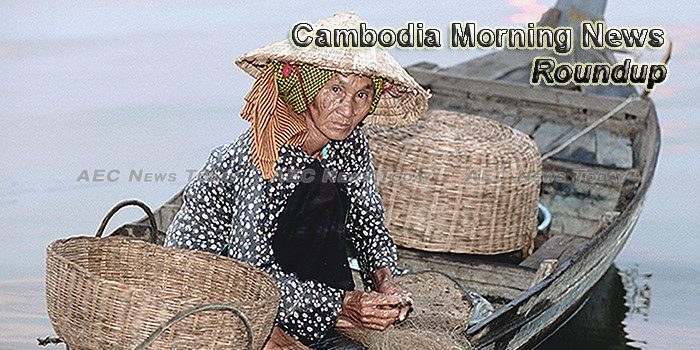 Cambodian PM Hun Sen tells opponents to ‘prepare coffins’
Cambodia’s premier on Wednesday (June 21) told his critics and political opponents they faced elimination and should “prepare coffins”, an escalation in rhetoric even for a man known for bellicose speeches.
– The Straits Times (paywall)

Fast-growing Cambodia attracts insurance player AIA
With a history that dates back to nearly a century in the Asia-Pacific region, the AIA Group aims to become the world’s pre-eminent life insurance provider. In May this year, AIA began operations in Cambodia, embarking on its first new market venture in 17 years. AIA Cambodia Chief Executive Officer Richard Bates discusses the insurance landscape in Cambodia, as well as AIA’s plans in the Kingdom.
— The Phnom Penh Post

Maize has local farmers’ ears
Growing demand for animal feed is driving up both the demand and price of corn, with smallholder farmers claiming the field crop offers a more stable market than cassava.
— The Phnom Penh Post

Costly passport fees vex migrants
Cambodian migrant workers in Malaysia are being saddled with exorbitant fees of up to $1,000 by travel agencies to renew their passports and to apply for visas, The Post has discovered – a practice that leaves them vulnerable to exploitation and potential run-ins with the law.
— The Phnom Penh Post

Cambodia is Implementing A New Program To Teach Students about LGBTQ Life
Cambodia has just announced its “Life Skills” program. The program will be focused on children from grades 1 to 12, and assignments will be given starting at grade 5.
— Instinct Magazine

NA President hails Laos-Cambodia bilateral relations, cooperation
The Lao side highly values the relations and cooperation between Laos and Cambodia, President of the National Assembly (NA), MsPanyYathotou told her visiting Cambodian counterpart HengSamrin in their meeting yesterday in the capital.
MrHengSamrin is paying an official goodwill visit to Laos from June 21-23 in response to an invitation from MsPany.
— Vientiane Times

Kem Sokha Promises Political Tolerance to Cham Muslims
CNRP President Kem Sokha has promised opposition supporters among the Cham Muslim community that any government he leads would put an end to political harassment from the community’s pro-CPP leaders, whom he claimed pressured followers not to join his party.
— The Cambodia Daily (paywall)

Banks roll out cards with new logos
Financial institutions that were abruptly ordered to change their logos earlier this year due to the perceived similarities with state iconography have begun issuing new bank cards to their clients free of charge.
— The Phnom Penh Post

FBI Provides Refreshers on Cybercrime Efforts
U.S. FBI officials and experts this week provided training on preventing and reacting to cybercrime and cross-border crimes to about 140 participants from 20 Asia-Pacific countries in Cambodia.
— The Cambodia Daily (paywall)