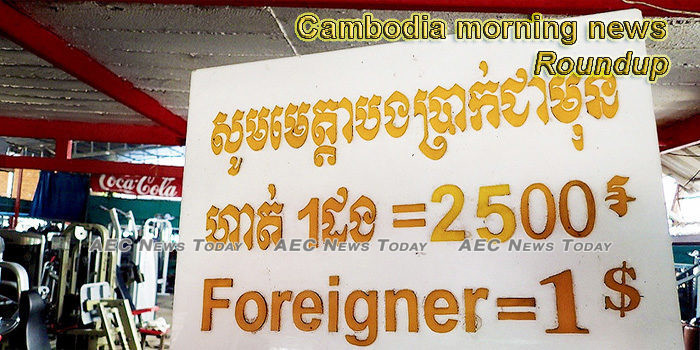 No more stamp duty on homes sold under $70k
The government has decided to exempt the 4 percent stamp tax on all residential properties valued less than $70,000 until January to contribute to sustaining the country’s economic growth.
— Khmer Times

Tourism Sector Generates Nearly US$5 Billion in 2019
Tourism sector, one of the main economic drivers, generated last year almost US$5 billon, a year-on-year increase of 12 percent, according to a report from the Ministry of Tourism.
— AKP

Kratie administration reports third dolphin calf recorded this year
A newborn Mekong dolphin calf was spotted in the Kampi deep pool in Kratie province’s Chetr Borei district on Sunday, making it the third to be recorded so far this year, according to the provincial fisheries administration.
— Khmer Times

Japan pledges nearly $900,000 to improve Kingdom’s agriculture
The Japanese government has donated a total of $890,471 for the development of irrigation systems, maternal and child healthcare and youth capacity building in the Kingdom.
— Khmer Times

Projects worth millions agreed
The Council for the Development of Cambodia (CDC) yesterday approved six development projects worth in total $677 million.
— Khmer Times

US$120 Million NR58 Put Into Official Use
The newly-built National Road No. 58 linking Poipet city in Banteay Meanchey province to Samrong city of Oddar Meanchey province was put into official use this morning.
— AKP

Ministry sends letter outlining less red tape and import costs for raw garments
To facilitate and support the garment sector currently encountering a lack of raw materials and to reduce logistics and transportation costs, the Ministry of Economy and Finance yesterday sought urgent measures to help the sectors importers and exporters.
— Khmer Times

Weekly Weather; Light rain for coastal areas to bring respite from heat wave
The Ministry of Water Resources and Meteorology has forecast that from February 27 to March 2, coastal areas are likely to experience low to moderate rainfall because of a low pressure valley climate covering Cambodia.
— Khmer Times

Another International Hospital to Appear in Phnom Penh
Phnom Penh capital will have another large international hospital, whose construction is invested by the Royal Cambodia Hospital Co., Ltd.
— AKP

Cambodia ‘keen on as many trade deals’ as possible
Prime Minister Hun Sen says he wants the nation to have many trade agreements with different partners to diversify its economic partners and attract more foreign direct investment.
— Khmer Times

Ministry moves to implement draft policy for cashew nut production
The Ministry of Commerce has formed a working group to draft a strategic policy on cashew nut development in Cambodia.
— Khmer Times

City Hall announces open bidding for capital waste management
City Hall has announced the beginning of an open tender process for companies interested in addressing Phnom Penh’s waste problems after Cintri, a company that held a rubbish collection monopoly in the capital for about two decades, lost its license in December for failing to meet its obligations.
— Khmer Times

CNM: Malaria cases decrease by half, dengue fever triples
A 49 percent decrease has been recorded last year for the number of malaria cases in the Kingdom compared to the same period in 2018, the National Centre for Parasitology, Entomology and Malaria Control revealed.
— Khmer Times

Final phase of Life Long Learning Program in Prisons launched
The third and final phase of the prison library project was launched yesterday. The project started in 2012 and it aims to give access to libraries and other educational services to more than 30,000 detainees in the 27 prisons throughout the Kingdom.
— Khmer Times

Ministry refutes claims that 2019 census is flawed
The Ministry of Planning yesterday refuted claims that the census it carried out last year had flaws.
— Khmer Times

Prosecution, Government Allege Foreign Role In CNRP Formation, But Present No Evidence
As Kem Sokha’s trial resumed after a two-week recess, the prosecution and government lawyers hinted, and occasionally alleged, that the opposition leader used foreign assistance to form the Cambodia National Rescue Party, but provided no evidence to support the claim.
— VOA Khmer

Feature photo I, on Cambodia