Thailand Tourism Guide in The Wake of King Adulyadej’s Death 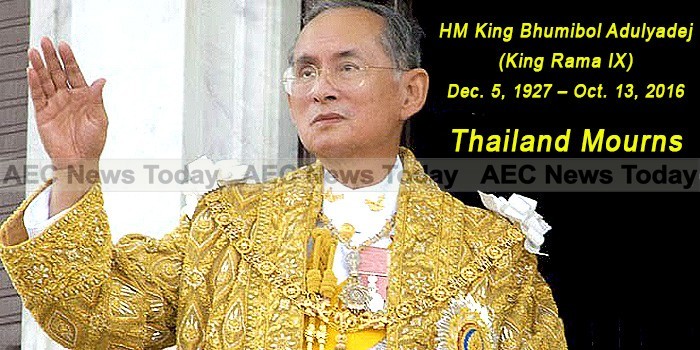 Thailand has officially commenced one year of mourning. All Thais have been encouraged to wear black for at least the first 30-days, while the Thai national flag will be flown at half-mast throughout the country and at foreign missions abroad.

Books of condolence will be available for the public to leave messages of support and tribute to King Adulyadej at all Thai foreign overseas missions commencing Monday, October 17, 2016.

While encouraging those with planned holidays in Thailand to continue with their travel schedule as normal, the TAT and Thailand government has also asked visitors and foreigners residing in the Kingdom to respect the feelings and sensitivities of the Thai people at this time.

Although foreigners are not required to wear black, it is strongly suggested that they dress in sombre clothing and avoid boisterous, or exuberant outbursts while in public. Similar advice has been issued by a number of foreign embassies.

While television and radio stations were at first ordered to exclusively broadcast documentaries on the late King for 30-days, this order has since been amended. As of 12.01am Saturday, TV and radio stations were able to select their own programming, but don’t expect to see any substantial change. Programmes must not contain entertainment and overly emotional content. Thailand’s notorious soap-operas will not be aired during the 30-days.

Media Controlled in the Wake of King’s Death

The Bangkok Post cited government spokesman General Sansern Kaewkamnerd as saying radio and television channels, as well as online media, are requested to present appropriate content to audiences for the time being, to boost public morale, reduce confusion, and relieve concerns in society. Hosts of television programmes and announcers must wear black and white only.

Guidelines issued by the National Broadcasting and Telecommunications Commission (NBTC) state that television programmes and advertising should not include ‘any element of entertainment, dancing, joy, violence, impoliteness or overly expressed emotion’.

In addition, information related to King Adulyadej’s death must be approved by authorised institutions. Criticism or analysis is not permitted, while pictures and the tone of broadcasts must be proper. TV channels must immediately relay Television Pool of Thailand live broadcasts of royal ceremonies.

According to The Nation, additional media requirements in the wake of the death of King Adulyadej include a requirement that ‘newspaper content and ads must be published in grey, while magazine covers must also be printed in grey. The colour of inside content is still subject to government direction.

The guidelines also apply to online and ‘out-of-home media’, with Thai websites required to adopt a greyscale colour tone only. Additionally, digital billboards will be shut off at night, while in-store and transit light boxes will be turned off.’

The BBC and Al Jazeera English, have had their broadcasts in Thailand blocked by cable television operator TrueVisions for what was deemed ‘inappropriate content’, while YouTube will be blocked for seven days. An assortment of online publications have had either individual stories or their entire website blocked, while social media platform Facebook has suspended all online advertising in Thailand for the 30-day mourning period.

Alcohol in Thailand After The King’s Death

Entertainment venues in Thailand such as bars and nightclubs have been asked to give consideration to whether they should be open at this time, with the decision to be made by the individual owners. Any form of partying or festive behaviour inside entertainment venues is expected to be treated with zero tolerance.

While retail giant Tesco Lotus has suspended the sale of alcohol ‘until further notice’, mini-marts and mom-and-pop shops have not. Despite Sunday, October 16 which is the end of Buddhist Lent and an alcohol-free day in Thailand, alcohol can be purchased during the normal hours of 11am–-2pm and 5pm–midnight.

All nightclubs across the capital will remain closed over the weekend, with some possibly staying dark for several weeks if the ‘no loud music or party atmosphere’ requirement is enforced for the 30-days of mourning, he advises.

In the Khaosan Road ‘backpacker section’ of Bangkok those restaurants that did open were attracting little trade, with all forms of entertainment turned off.

On the island of Koh Phangan, the ‘Full Moon party’ set to begin on October 17 was cancelled, as too was a concert in Bangkok featuring British singer Morrissey.

Although banks, hospitals, transport, and other public services are operating as usual, visitors might notice a higher than normal military presence due to a combination of King Adulyadej’s death and a terror alert issued earlier in the week following a tip-off by Australian countert-terrorism officials of a possible plot to detonate car bombs in Bangkok. The start of the Queen’s Birthday holiday weekend was marred by a series of bombings on August 11 and 12 in seven Thailand provinces killing four people and injuring at least 30.

The TAT advises that tourist attractions are open with the exception of Wat Pra Kaew (Temple of the Emerald Buddha) and the Grand Palace in Bangkok. People should expect traffic disruptions and heightened security around both areas while people pay their respects to the late King Adulyadej.

While most traditional and cultural events will take place as usual, the celebrations may be changed for appropriateness as a mark of respect to the memory of King Adulyadej.

In the northern city of Chiang Mai the city municipality have advised that all sales at the Chiang Mai Night Bazaar, as well as at the Chiang Mai Sunday market and Wualai Walking Street market have been suspended, while the Yi Peng festival incorporating Loy Krathong in November has been cancelled.

In Nakhon Phanom all entertainment activities associated with the illuminated Boat Procession and the Red Cross Fair between October 9-17 have cancelled, along with the procession itself. In Surin the 12-day annual Amazing Surin Elephant Festival, scheduled for Nov 11-22 has been postponed to an as yet to be determined period.

In Khon Kaen all entertainment for the Ok-Pansa festival, or Buddhist Lent, on October 16 has been cancelled. Although the Rub Bua Festival boat parade took place in Bang Phli, Samut Prakan, yesterday (Saturday) as scheduled, buffalo racing scheduled in Chonburi was cancelled.

In Pattaya the Loy Krathong, International Fireworks & New Year celebrations have all been cancelled for this year.

Visitors and foreigners residing in Thailand are reminded that Thailand lese majeste laws are among the strictest in the world. Lese majeste complaints can be filed by anyone, against anyone – including foreigners – and they must always be formally investigated by the police.

Visitors and foreigners are advised to exercise caution in any discussions they have involving the King Adulyadej, the queen, the heir-apparent, or the regent lest their comments be misinterpreted.