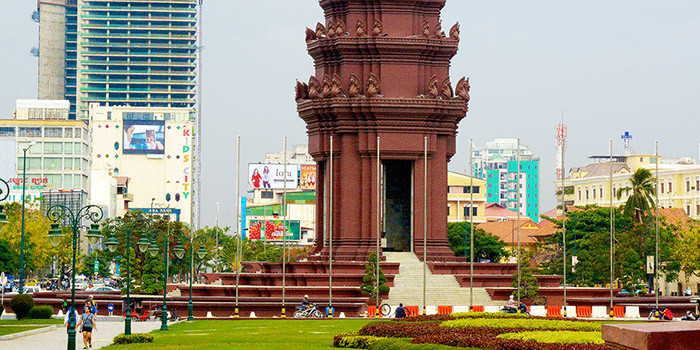 Despite some appearances to the contrary, things in Cambodia are looking pretty rosy… at least according to the World Bank. In its latest revision of world economies the Bank raised Cambodia’s status from a low-income economy to a lower-middle income country.

The reclassification to a lower-middle income economy is based on the Banks estimate that Cambodia gross national income (GNI) per capita for 2015 reached the required threshold of US$1,026, after hitting $1,020  in 2014.

The upgrade comes less than two months after the World Bank resumed lending to Cambodia after it froze all new loans in 2011 in the wake of controversy surrounding the Boeung Kak Lake dispute.

The upgrade is good news for the Cambodia government and its ongoing attempts to battle poverty and improve income levels as the country’s economy races along at an average growth rate over the past five years of 7.16 per cent, and an impressive 8.1 per cent per annum average over the last 20 years.

Cambodia joins 51 other economies including Lao PDR, Vietnam and the Philippines who have seen economic growth push them into the lower-middle income bracket.

The upgrade to a lower-middle income economy, however, means that Cambodia will no longer be eligible for a range of soft loans, grants and development packages, as well as highly favourable trade privileges, putting increased pressure on the government to support the country’s continued social development through trade and investment.

The World Bank uses a country’s income level to determine which to lend to and at what interest rate. The Asian Development Bank (ADB) also uses a similar GNI-based classification on its lending criteria. Last year the ADB approved projects in Cambodia totalling $223.1 million, including $90.6 million under cofinancing for investment projects and $1.5 million for technical assistance.

While the World Bank and ADB has made no comment on how Cambodia’s elevation to a lower-middle-income economy will impact future funding former US ambassador to the ADB, Curtis Chin, told The Phnom Penh Post that Cambodia can “expect to see a shift in the sort and amount of assistance it might receive from development agencies”.

However, Mr Chin said the reduction in aid money will be gradual and coincide with a tapering off of trade privileges, such as those granted under the EUs Generalized System of Preferences (GSP) for “everything except arms” (EBA) programme.

Under the EBA Cambodian goods exported to the European Union (EU) are able to enter the EU market duty- and quota-free. This has been particularly beneficial to Cambodia’s key industries of agriculture and garments and allowed them to flourish. These privileges are extended by the EU to the world’s least developed countries (LDPs), a classification by the UN which reviews eligibility for LDC designation every three years.

Given Cambodia’s current rate of growth it is unlikely any reductions will occour until 2021 at the earliest, and even then there will be a three-year transition period to guard against ‘trade flow shock’.

On the upside though the elevated economic status could also open the doors to the World Bank’s International Bank for Reconstruction and Development, providing the government with access to additional capital.

While pleased at the country’s rising prosperity – just two decades ago Cambodia GNI was $240 – Cambodia Commerce Minister Pan Sorasak, said the revised designation to a lower-middle income economy would have little effect in the foreseeable future. Advising Cambodian exporters to maximise the utilisation of existing duty- and quota-free trade agreements in preparation for a gradual tapering of such privileges in the years ahead, Mr Sorasak told The Phnom Penh Post that by the time Cambodia graduated from LDC status it will be strong enough to stand by itself.

Earlier this year Peter Brimble, ADB senior country economist, told The Cambodian Daily that while achieving Cambodia Prime Minister Hun Sen’s goal of reaching upper-middle income status such as regional peers Thailand and Malaysia by 2030 is “probably a real challenge” and require an annual growth rate of 9.5 per cent between 2012 and 2030 of 9.5 per cent, the country may come close.

This view is similar to that of the Cambodia Development Research Institute (CDRI) which earlier this year said it was convinced that the Cambodia economy could achieve an average annual GDP growth of around 8.5 per cent over the period 2012-20132.