Philippine rickshaw’s gets a hemp make-over 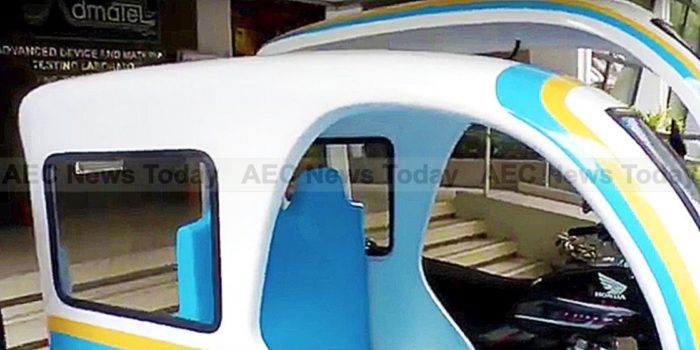 On July 1 Filipino and South Korean scientists commenced a project to develop sidecars for tricycle made almost entirely of abaca fibre composites. This is the first time that abaca – a species of banana native to the Philippines – will be used as a passenger load-bearing component.

The Philippines is the world’s major source of abaca fibre, also called Manila hemp, that is extracted from the leaf sheath around the trunk of the abaca plant (Musa textilis).

According to scientists at the Department of Science and Technology-Industrial Technology Development Institute (DOST-ITDI), which collaborated with the Korea Institute of Materials Science (KIMS) to develop the project, the locally-sourced abaca fibre composites reduce the weight of automotive parts by about 60 per cent.

The lower density saves nearly half the energy consumed by conventional tricycles made of GI sheets (galvanised iron) and metal, says DOST-ITDI lead researcher Marissa Paglicawan. The abaca composite also absorbs impact much better than metals, adds KIMS director Byung-Sun Kim. “Right now most of the interiors of more than 80 per cent of cars worldwide are made of natural fibre composites.”

Motorised and pedal-powered tricycles are a common means of public transportation in the Philippines. They are similar to the three-wheeled taxis in Thailand called tuk-tuks, and the auto rickshaws of India. The more ubiquitous motorised trike is powered by a motorcycle affixed with a sidecar designed to carry about two to three passengers. It is common, however, to see tricycles overloaded with as many people and goods as it can carry.

The abaca tricycle’s sidecar has been redesigned to have an 20.32cm (8-inch) taller headroom, and its entrance is 15.25cm (6-inch) wider compared with conventional trikes. But the design is still too small, as even new DOST Secretary Fortunato de la Peña admits: “I can’t seem to fit into the tricycle cab.”

In addition, Karl Vergel, head of the transport and environment group of the University of the Philippines National Center for Transportation Studies (NCTS), raises safety concerns.

“Its strength needs to be tested,” Vergel says, noting, “the problem is, even conventional tricycles have never been tested for safety”.

The safety standards, says his NCTS colleague, Ernesto Abaya, are based on the “bicycle principle of go slow”: “At a maximum of 30kph (18.64 mph), the impact would not be so serious.”

This article was written by SciDev.Net’s South-East Asia & Pacific desk and first appeared on SciDev.net as: Rickshaw gets upgrade with hemp sidecar under a Creative Commons licence and is reproduced here with its kind permission.