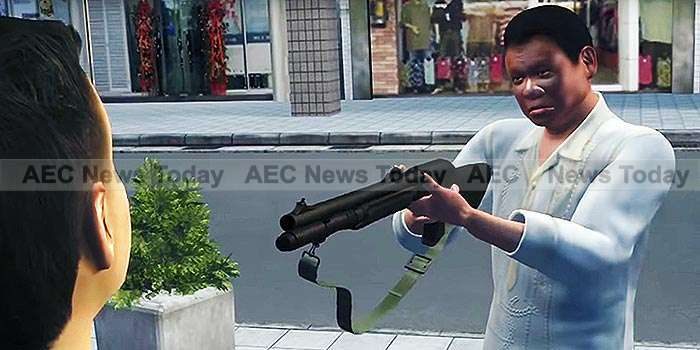 In its latest animation Tomo News has labelled Philippine President Rodrigo ‘Digong’ Duterte as a “genocidal maniac” and “stone cold psycho”. The scathing appraisal follows boasts by the 71-year-old that he personally had killed people while Mayor of Davao City.

In a speech on Monday, Mr Duterte said he would ride around on a motorcycle seeking out criminals, “I was really looking for an encounter to be able to kill.”

Following an outcry and call to investigate Mr Duterte for murder by Zeid Ra’ad al-Hussein, the United Nations United Nations high commissioner for human rights, Malacañang Palace attempted to assure media that the killings were part of “legitimate police action” Inquirer.net reports, while Mr Duterte rebuffed the UN chief by resorting to his predictable “you son of a bitch” retort.

Back peddling from his wild west machismo, Mr Duterte offered clarification that he hasn’t strolled the streets smiting ne’er-do-wells. The people he shot were involved in a three-day standoff at the Davao City Jail in 1989.

Members of the Wild Boys gang had taken 15 hostages and as Davao City Mayor, Mr Duterte was part of the negotiating team. Five of the hostages ended up dead, including 36-year-old Australian missionary Jacqueline Hamill who was gang raped first, something the Philippine President made light of last April saying he should have been the first to rape her.

Philippine crime down, but most Filipinos live in fear

With the body count from Digong’s war on drugs having topped 6,000, it’s not surprising that normal Filipinos are feeling somewhat on edge. According to a Social Weather Stations (SWS) survey 80 percent of Filipinos fear for their, or a loved one’s, life.

According to Senator Antonio Trillanes IV, the SWS survey “basically debunks the Duterte administration’s propaganda line that our people feel safer now than before they assumed power.”

The survey came on the back of the release of national crime figures from the Philippines National Police (PNP) showing a decrease in most crime.between July and November this year, compared with the same period in 2015.

According to the report the index crime volume dropped 31.67 per cent, with property related crimes such as robbery, theft, carjacking, and cattle rustling dropping by 42.48 per cent, while crimes against a person, such as physical injury, and rape, are down 12.25 per cent. The only exception has been murder, which has seen a rise of more than 50 per cent.

Akbayan representative Tom Villarin told Inquirer.net: “When each of us don’t feel safe and worried that death will come to someone we know and love, it means that we are losing the war on drugs.”