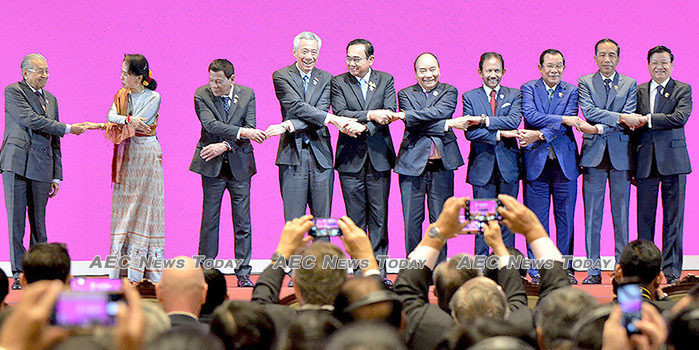 We’ll be the first to admit that we don’t really know what is going on in the photos below, other than that the scenes captured at the opening ceremony of the 35th Asean Summit and Related Summits by Thailand & GMS editor John Le Fevre on November 3 appear to have been edited out of any of the official opening session videos.

In the photo sequence below Malaysian Prime Minister Dr Mahathir Mohamad appears to stand his ground when Asean leaders are told to perform their impersonation of two anacondas mating, aka the “Asean handshake”.

Long after those on the left of Thailand Prime Minister and 2019 Asean Chair, General Prayut Chan-o-cha, have gotten much more close and personal than they are accustomed, Philippine President Rodrigo Duterte is left dangling at the end of the anaconda mating line with no mate. To his right Dr Mahathir stands firm, one arm extended and appearing to smirk at Myanmar State Counsellor, Aung San Suu Kyi.

The outspoken Malaysian leader has openly criticised Ms Suu Ky over her handling of the Rohingya crisis, which has seen some 800,000 Muslim Rohingya flee from their homes and villages in Myanmar into Bangladesh, ahead of a sweeping genocide campaign by the Tatmadaw.

Indefensible and inexcusable treatment of Rohingya

Last November Dr Mahathir labelled Ms Suu Kyi’s response to the persecution of the Rohingya as “indefensible”, adding that he was “very disappointed.

Someone who has been detained before should know the sufferings and should not inflict it on the hapless”, he said, adding that Ms Suu Kyi “is trying to defend what is indefensible”. Relations between the two have been poor ever since.

As President Duterte flails around in search of support that isn’t there, Ms Suu Kyi can be seen appearing to give the nonagenarian a few tugs towards his reaching fingers. The expression on the Malaysian leader’s face throughout ranges from glum, before ending with a beaming cheeky, schoolboy-like grin as Ms Su Kyi ends up the filling in a Mahathir-Duturte sandwich.

What was really going on? We have no idea, but feel free to add your suggestions in the comment section below if you have some insight.

The new Boracay: not how you remember it (video)