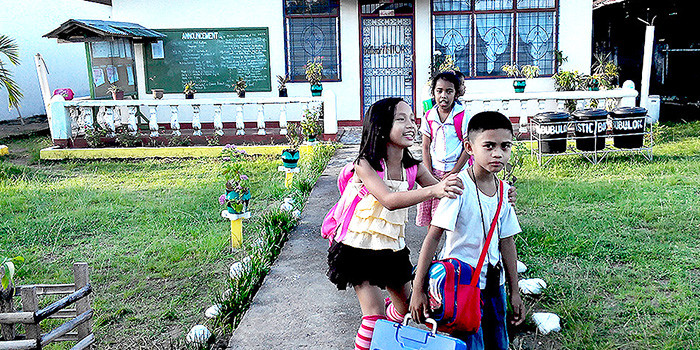 Philippine Budget Secretary Benjamin Diokno presented the 2017 Philippine budget to the leadership of the House of Representatives on Monday and, true to the campaign promises of President Rodrigo Duterte, it focuses additional funding in key the areas of education, agriculture, social services, and infrastructure.

“I can characterise it as saying we’re putting our money where our mouth”, Mr Diokno said, adding that the 2017 Philippine budget “is consistent with President Duterte’s ten-point agenda.”

However, ‘real change’ doesn’t come without a cost and the 2017 Philippine budget will see the budget to gross domestic product (GDP) ratio increase from 20.1 per cent to 20.4 per cent and push the trade deficit from the current 2 per cent to 3 per cent of Philippine GDP.

In his budget message to Congress, Philippine President Rodrigo Duterte reminded lawmakers of the shared responsibility in ensuring prompt and efficient delivery of basic services to the people.

“I was elected to bring forth real change in the government… Real change, as I said, begins with us and in us. We must remind ourselves of this basic principle: Our people, through their taxes, provide the lifeblood of the government. They are the reasons for government’s very existence. Our people expect no less from us,” Mr Duterte said.

True to promises made while on the hustings and subsequent to being sworn in as the Philippines 16th president, the Duterte administration’s first budget sees the largest chunk earmarked for social services. Major beneficiaries include the Department of Health (DOH), Department of Social Welfare and Development (DSWD), Department of Education (DepEd), and Department of Labor and Employment (DOLE).

Combined the four departments will receive $29 billion (P1.345 trillion) representing 40 per cent of the budget, an increase of 20.13 per cent over the $24.14 billion (P1.12 trillion) allocation they received this year.

Philippine Education Gets 31% Boost in Budget

Among individual agencies the Department of Education received the highest budget at $12.22 billion (P567.5 billion), a 31 per cent increase over its budget this year of $9.34 billion (P433.3 billion). Included in the total is a $60.37 million (P2.8 billion) allocation to the miscellaneous personnel benefits (MPB) fund for the hiring of 53,831 new teachers, the construction of 47,000 classrooms, and to assist 2.7 million students who will be diverted to private schools as part of the Philippines K-12 programme (See: Weighing The Benefits of The Philippines K-12 Programme).

Of the proposed Department of Social Welfare and Development budget, $1.69 billion (P78.7 billion) will go to the Pantawid Pamilya Pilipino programme (4Ps), a conditional cash transfer program that aims to eradicate extreme poverty in the Philippines by investing in health and education, particularly in ages 0–14.

Despite rumours that the Duterte administration was going to discontinue the programme, implemented during the presidency of Gloria Macapagal-Arroyo and which now operates in 79 provinces covering 17 regions, Mr Duterte expanded it by adding a $506.37 million (P23.5 billion) rice allowance for its more than four million beneficiaries.

Throughout his campaign Mr Duterte vowed to embark on a massive infrastructure expansion and upgrade programme and this is also reflected in the administration’s first budget.

Prior to delivering the budget to parliament for scrutiny Mr Diokno was quoted in local media reports as saying that the next six years will be the “golden age of Philippine construction, both public and private”.

The budget, declared “pork free” by its drafters, also see’s a big boost for the country’s agricultural sector with $2.59 billion (P120.5 billion) allocated for agriculture and rural development: a boom for the farming sector which has been declining for years due to low productivity and outdated farming practices.

With the Duterte administration in the midst of a bloody anti-drugs and crime war, public safety and order also received a big chunk of the proposed 2017 Philippine budget.

The Philippine National Police (PNP) will get $2.37 billion (P110.4 billion) to hire 10,000 additional police and to acquire more guns and patrol vehicles “for more effective crime suppression”, while the Armed Forces of the Philippines (AFP) will get $2.81 billon (P130.6 billion) for its counter-terrorism efforts.

In his budget address Mr Duterte emphasised that his government will intensify its efforts to stamp out drug trafficking and put a stop to terrorism, with Islamic State (IS), together with local acolytes such as Abu Sayyaf, seen as the biggest terrorist threat to the nation of 100 million people.

Mr Duterte’s focus on dealing with internal threats and terrorism is a marked departure from the administration of Benigno Aquino III which allotted more money towards the acquisition of modern weaponry to deal with external threats.

The arms acquisitions were seen as targeted at China with which the Philippines is embroiled in a territorial dispute over Scarborough Shoal in the South China Sea (See: Achieving Harmony in The Wake of The South China Sea Ruling).

Describing the arms-buying spree of the Aquino administration as “wasteful”, Mr Duterte has said he is inclined to negotiate with China on the matter.

Having top national leaders in the new administration from Mindanao – Mr Duterte is the first Philippine president from Mindanao, while House Speaker Pantaleon Alvarez and Senate President Koko Pimentel are also Mindanaoans – has also translated into a boon for the residents of the Philippines second largest and southernmost major island.

Known as the “promised land” for its abundant natural resources, Mindanao has lagged behind neighbouring islands in development due to neglect by Manila and a lengthy period of conflict with Communist and a Muslim insurgency.

Mr Duterte has initiated peace talks with Communist and Muslim rebel groups in the area that is expected to finally end the highly-destructive conflict, a major factor in investors shunning the region despite its wealth of natural resources.

With the majority of senior national leaders in the past hailing from Luzon and the Visayas, Mindanao has historically received a smaller share of the Philippine national budget than its population of 22 million and importance as a mineral rich region and major producer of fish, rice, fruits, vegetables, and rubber would dictate. This is all set to change.

The proposed 2017 Philippine budget is the biggest in the country’s history. And while it largely reflects the promise made by Mr Duterte during his run for the presidency, it remains to be seen if the lot of ordinary Filipinos will rise with its disbursement.

War on terrorism: The making of a Philippine Scout Ranger (video)