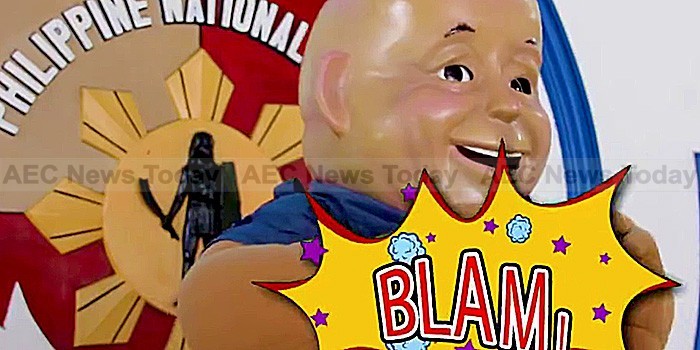 As the body count from the Philippine war on drugs continues to mount well beyond 3,500 the Philippine National Police (PNP) police community relations group (PCRG) has attempted to take some of the sting out of the bloody results with a video featuring a life size characterisation of Philippine police head, Director-General Ronald de la Rosa.

In the video a clownish personification of the Philippine police head is seen warning the public against the three most common encountered illegal drugs in the Philippines.

The normally tough and serious-looking Philippine police head – whose big, bald glossy head is the first thing most people notice on seeing him – is depicted as a person who mixes fun, humor, and violence with his job as he marches along to fight the Philippine war on drugs.

Tasked by Philippine President Rodrigo Duterte to lead the fight against illegal drugs, the Philippine police head has responded enthusiastically. Now into its third month the widely internationally condemned Philippines war on drugs is turning increasingly lethal by the day. Earlier this week the death toll from official police operations and from extrajudicial killings widely speculated to be the work of special police teams, breached 3,700.

Accompanying the first scene is narration that says: ‘This is the kid and this is shabu’, referring to crystal methamphetamine, commonly referred to as ‘poor man’s cocaine’ in the Philippines.

The image then turns to a shabby-looking kid apparently under the influence of drugs,  highlighting the need for young people to be kept away from drugs and the social problems they cause. The scene is repeated again warning against marijuana and a third time referencing the party drug ecstasy.

According to the PNP video these are the three illegal drugs that you should avoid.

Since being uploaded to the PCRP.PNP Facebook page on October 10 the video has already elicited more than 726,000 views, with one commentator posting: ‘Seriously??? I think the people who made this video were high on something.’ We’ll leave you to be the best judge of that.