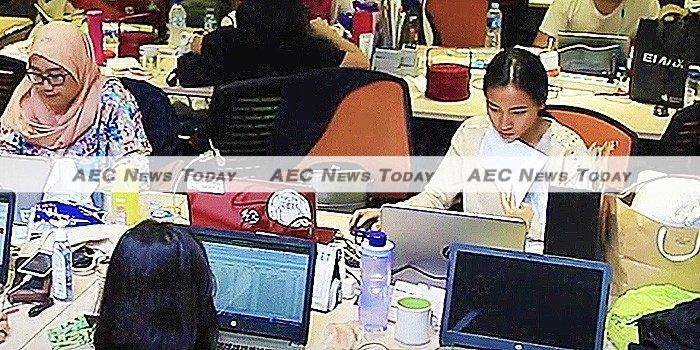 A few years ago, lecturer Novistiar Rustandi wondered how he could help more Indonesians earn university degrees so that they can get better jobs. He knew that a degree is now compulsory to get a decent job. But many of those who want to get a university degree don’t have the time or access to attend classes.

With a few colleagues Mr Rustandi developed an e-learning platform to help solve this problem. They established a digital startup, offering services for universities to develop online courses.

“Lecturers can now teach from their homes and students have the flexibility to study at their own pace,” explained Mr Rustandi.

“Digital technology is a new platform of resources,” said Philips Vermonte, Executive Director of the Center for Strategic and International Studies (CSIS), where the Jakarta launch of the report was held. “Indonesia should really start to think of how to take advantage of this opportunity.”

Digital technology has grown rapidly but many have not fully benefited from these developments. Four billion people globally still lack internet access.  Yet the potential is enormous, since the internet is more evenly spread than income.

According to the report, in order to reap the digital dividends, internet access must be made universal, affordable, open, and secure. Otherwise the dividends will be enjoyed only by a few.

“At the moment, digital technology in Indonesia mostly benefits the middle class who have internet access and companies who provide services that are accessible online,” said Nadiem Makarim, CEO of Gojek Indonesia, an app-based motorcycle taxi service which delivers goods and offers rides to commuters. “For the digital economy to be more inclusive, the government should help make internet access available for more people.”

“We are in the process of developing a fiber optic network to connect all districts in the country,” said Rudiantara, Indonesia Minister for Communication and Information Technology, who like many Indonesians goes by just one name.

“We plan that by 2019, we will have a reliable internet connection across the country through the Palapa Ring.” ‘Palapa’ refers to the Palapa Oath, made in the 14th century, to unite the islands of the archipelago.

But infrastructure alone is not enough. A thriving digital economy requires a strong ‘analog’ foundation, comprising of enabling regulations, skills and institutions that are suited to the needs of each country.

“The digital economy will face similar challenges as with the ‘analog’ economy, which Indonesia still hasn’t really managed to overcome: weak infrastructure, murky regulations and poor planning,” said Ilham Habibie, Head of the National Information Technology and Communication Board.

Tensions over regulations are not new in Indonesia. Recently the capital of Jakarta saw large demonstrations by taxi drivers demanding a ban of online taxi services, arguing that the unregistered services violate local regulations.

“Clear regulations are important,” said Mari Pangestu, who served as both Minister of Trade and Minister for Tourism and Creative Economy. “But they should not be regulations that will become a burden and prevent anything from happening.”

This article first appeared on the World Bank website as Indonesia’s Path to Reap Digital Dividends and is reproduced here with its kind permission.