Located some 300km (190miles) north of the Lao PDR capital Vientiane, Luang Prabang lies in a valley at the confluence of the Mekong and Nam Khan rivers.

Once the capital of the Tai kingdom of Lan Xang (Thai Lan Chang ‘land of a million elephants’) today it is best known for its United Nations Educational, Scientific and Cultural Organization (Unesco) Town Of Luang Prabang World Heritage Site, which encompasses 33 of the province’s 58 villages.

Surrounded by mountains and jungle, Luang Prabang City is accessible by road and river, though the journey using either mode of transport is not for the faint-hearted with the ‘Express Bus’ from Chiang Mai in northern Thailand, 362 kilometres (225 miles) away taking around 18 hours. A three day road and river trip from Chiang Mai is also available for those with more time on their hands. A more convenient option for those who just want to get there is an 80 minute flight from Bangkok or a 60 minute flight from Chiang Mai.

The single storey, single terminal Luang Prabang International Airport (LPIA) services some eight international flights daily from Bangkok, Chiang Mai, and Hanoi, in addition to several internal flights to Vientiane. Unless you are a citizen of Japan, The Republic of Korea, Russia, Luxembourg, Switzerland, or one of the ten Asean Community (AC) member countries who don’t need a visa to enter Lao PDR, or have obtained a visa from a Lao People’s Democratic Republic (LPDR) embassy or consulate prior to travelling, you will need to head to the left side of the arrival hall at LPIA to obtain an entry visa.

A 30-day tourist visa will cost US$ 36 and require two copies of the visa application form and two passport photos. Be warned, the time taken for processing can be somewhat lengthy. 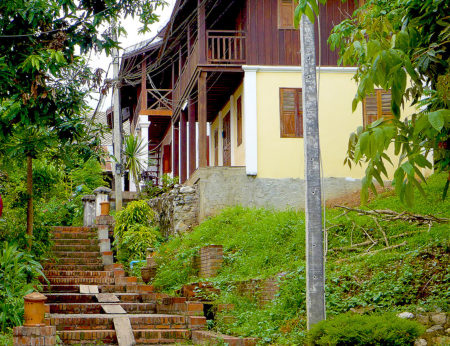 Located four kilometres from Luang Prabang city centre, fixed rate taxis and tuk-tuks are available at the arrivals exit. A taxi from the arrivals area will cost $7 (about LAK 56,450), or $6.20 (LAK 50,000) if purchased from a counter near the exit door of the airport.

Although the Lao kip (LAK) is available in denominations ranging from one through to 100,000, with an exchange rate of about LAK 8,100 to the US dollar it is unsurprising that both Thai baht and US dollars are widely accepted as legal tender for most transactions.

While LAK 10,000 might seem a lot for a beer, it equates to just under $1.25 and local traders are extremely adept at calculating exchange rates and change, leaving you more time to concentrate on the task at hand – drinking – rather than worrying about the exchange rate.

The old quarter of Luang Prabang is located on a peninsula about 800 metres (2,625 ft) long and some 225 metres (738 ft) wide bounded by the Mekong River to the Northwest, and the Nam Khan River to the Northeast and Southeast.

The main road running through the centre, Sakkaline Road, has restaurants and small hotels on one side and temples on the other. Branching off from Sakkaline Road is a network of brick lanes fanning out to separate small ‘villages’ where hidden temples and shophouse restaurants, as well as banana plantations and the decaying remains of once splendid French colonial villas stand.

Where Sakkaline Road becomes Sisavangvong Road signals the beginning of the backpacker area with lots of restaurants, guest houses and tour shops. There is also a usefully located  branch of Lao Development Bank (LDB) where you can change major currencies at a reasonable rate.

Perhaps the most beautiful part of the city though is along Khem Khong Road running parallel with the Mekong River. Here one will find old colonial style buildings sloping up to the centre of the peninsula and open-air restaurants sitting some 18 metres (60ft) above the Mekong River. On the opposite bank is jungle and mountain.

Though in some ways reminiscent of Chiang Mai as a centre for adventure holidays, Luang Prabang is much closer to the adventures: a quick ferry across the river and you are nearly there.

If you want to learn how to become a mahout, there are courses lasting between one- and six-days (the six day course presumably making you an expert). Alternatively there are boat trips to the Pak Ou caves with their thousands of Buddha images, kayaking and canoeing on the mountain rivers, trekking, and elephant riding  – if you really must contribute to the abuse of animals – similar to Chiang Mai, but with the adventure so much closer to your hotel.

In addition to having been the seat of the Laos government until the communists dissolved the monarchy in 1975 and imprisoned the royals in a remote reeducation camp and set up their own government, Luang Prabang was also a major monastic centre. According to the guide books there are 58 temples in Luang Prabang which is remarkable given its stated population of some 56,000. 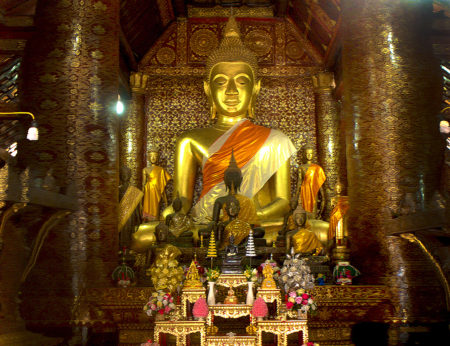 Wat Xieng Thong dating back to the 16th century and located on the river near the French quarter is well worth a visit. Set in extensive grounds and gardens with many stupas and Viharas (preaching halls); the inner and outer walls of the main Vihara are highly decorated with scenes from Buddhist tradition, the ornamental bronze doors very reminiscent of Chiang Mai temples. There is also a beautiful Mekong river boat on display, possibly used originally for taking monks on their alms-rounds.

Spectacularly situated 100m above and overlooking the city, river, and surrounding mountains is Wat That Chomsi. Further out of the city, on the way to the airport, is Wat Visounarath with its ancient stupa shaped like a water melon.

Also worth a look is the former Royal Palace. Constructed in 1904 for a francophone king who fathered 50 children, it houses thousands of gilded Buddha statues, including the 83 cm-high standing Buddha Phra Bang (‘Royal Buddha Image in the Dispelling Fear mudra‘) the palladium of Laos and from which the city draws its name.

If shopping is more your thing the Morning Market located near the Royal Palace – open daily, sunrise through to the afternoon – and the Night Market beginning at Wat Mai on Sisavangvong Rd. to Kitsalat Rd. are the places to head; open daily from dusk until 11 pm here you’ll find hill-tribe traders hawking a range of goods including apparels, handicrafts and silk scarves, through to ceramics, bamboo, lamps, and bed covers.

Where to stay in Luang Prabang 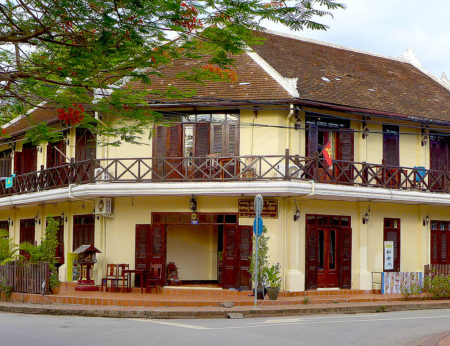 While dorm beds in the backpacker section can be had for as little as $5 per night, guest houses and hotels range from the fairly inexpensive to upscale resorts costing sveral hundred dollars a night. I paid around $28.00 for a room at Saynamkhan River View Hotel overlooking the Nam Kham River and the mountains beyond.

Situated just on the edge of the old French quarter and within walking distance of most of the city, in the mornings I sat on the terrace having breakfast watching monks returning from alms-collecting crossing over a bamboo bridge. In the evenings fishermen were casting their nets beneath the same bridge.

Clean, comfortable, and secure, the rooms featured air conditioning, flat-screen TVs, a mini bar, and free-Wifi and I would be happy to stay there again.

While you can walk most places there are metered taxi if you need, with a trip from the outskirts of town back to the riverside costing about $2.80. There is also an ‘e-bus’ service which allegedly operates every 15 minutes running three circular routes around the city, though I saw very few of them. Prices range from LAK 5,000 to LAK 15,000 with tickets able to be purchased from ‘e-bus’ partner shops, often located next to a bus stop.

While I found food to be reasonably priced it was somewhat unadventurous, comprising mainly Western and Thai, or Lao-Thai choices.

At LAK 45,000 or about $5.50 the Mekong river fish with rice at a small riverside restaurant was excellent value, as too was the smoked salmon baguette at Le Banneton, a French restaurant on Sakkaline Road, for around LAK 50,000. Drinkable white wine – not the fruit blend variety often found in Thailand – was available for about $5.50 per glass. 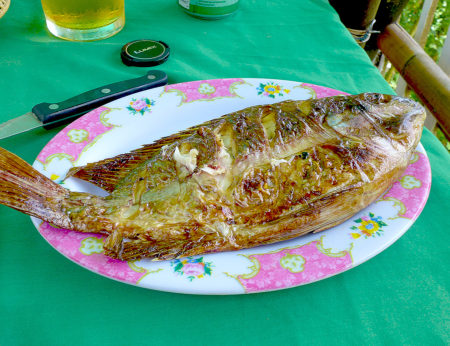 For a former French colony wine was disappointingly expensive – prices in Cambodia are much more attractive – and there was not a lot of choice when it came to white wine in the merchants on Sivangvong Road: a bottle of undistinguished Chilean white wine cost about $14 a bottle. Beer, on the other hand, was quite cheap at $1.20 – $2.00 for a large Beer Lao.

The Lao language is one of the Tai group of languages and very similar to Northeastern Thai (Isaan Thai), which is hardly surprising given that all of what is Lao PDR was once part of the Kingdom of Siam (modern day Thailand).

Most Northeastern Thai are of Lao descent, as the Isaan provinces of the Khorat plateau were originally part of the kingdom of Vientiane, a tributary state to the court of Siam. Many Lao people can speak Thai, though the reverse is not always true. The Lao script is similar to the Thai script, but with enough difference for a Thai reader to find some difficulties in reading it

In the tourist areas of Luang Prabang most people are comfortable speaking Thai and have some knowledge of English. Some cafes have menus in Lao and French, though I am not sure that many staff understood a lot of French.

Although I only stayed four days the dozy nature of the city, along with the colonial ambience and mountain surroundings, soon had me unwinding from the stresses of Bangkok to the point that by the time I went back to the airport, I was already planning a future trip to what is described as “the best-preserved city in Southeast Asia”.

Tony Doherty has travelled around Southeast Asia for more than 20 years and considers it a second home.

He is particularly interested in the history of the region, its colonial past, its arts and music, and the development of transportation systems; in particular how this development has changed the lives of the people.

He has contributed as a writer to numerous online publications and is a frequent contributor to Thailand By Train. He would love one day to travel from Singapore to London entirely by train.