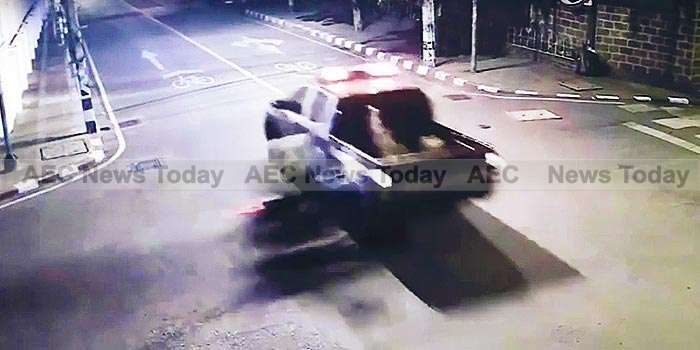 With the  holiday season in full swing and Thailand roads chock-a-block as people seek to escape the confines of the cities, Chiang Mai Rescue have posted a compilation of just a few of the road crashes the volunteer rescue first-responder has been called out to this year.

Accompanying the video the group explains:
Driving and riding in Thailand is dangerous! I try to explain to people how to ride safely, including :-
Slowing down at intersections
Expecting anything and everything could happen, including the unexpected
Always looking around for cars running red lights
Watching for cars fast or slow at traffic lights
Always knowing what your vehicle can do to get you in or out of trouble.
PLEASE WATCH AND LEARN

In its Global Status Report on Road Safety 2015, the World Health Organization (WHO) ranked Thailand second behind war ravaged Libya for the world’s most deadly roads on the number of deaths per 100,000 population, using figures from 2013, the latest available at the time.

With reports of only 43 per cent of motorcyclists wearing helmets, road deaths can amount to 80 deaths per day; even more during the countries so-called two ‘seven dangerous day’ periods. It’s somewhat unsurprising therefore to see that the majority of those involved in some of the worst motorcycle crashes above are not wearing helmets. They’re also the ones driving the most recklessly

When it comes time for calls for help the first people to appear on the scene might not be the best-of-the-best, but they do arrive. Traditionally termed ‘body snatchers’ in Thailand, volunteers using their own vehicles, uniforms, and equipment sit around Thailand cities at night waiting to respond to those in need.

However, while people have been focused on these volunteer rescue first-responders racing at high speed to road crashes, flashing lights atop private motor vehicles and motorbikes in the pursuit of making merit – the payment hospitals make for patients being a not-to-distant second consideration – a dramatic transformation has occurred.

Rather than bumbling well-intentioned amateurs, foundations such as Poh Tek Tung, Ruamkatanyu, and various others throughout the country have put the payments they receive to good use and are in many instances now equipped with modern rescue equipment, and volunteer rescue teams containing members who have undergone trauma training. It’s not unusual to see qualified doctors and nurses volunteering their services arriving at accidents in crisp white uniforms.

Chiang Mai Emergency Rescue, the organisation who released the compilation video, is a combination of volunteer rescue and first-response teams in the northern Thailand city, where the ambulance crews, medics, and rescue crews comprise entirely of volunteers.

For those heading to Chiang Mai during the holidays take note. If you see these people consider giving them a donation… because they’re the only ones who are gonna come and scrape you off the roads if needed.

AEC News Today wishes its readers a safe holiday season and salutes the volunteers throughout Asean standing-by to provide assistance to others in need.

Update: The video accompanying the original story was deleted by YouTube because people are not allowed to view reality