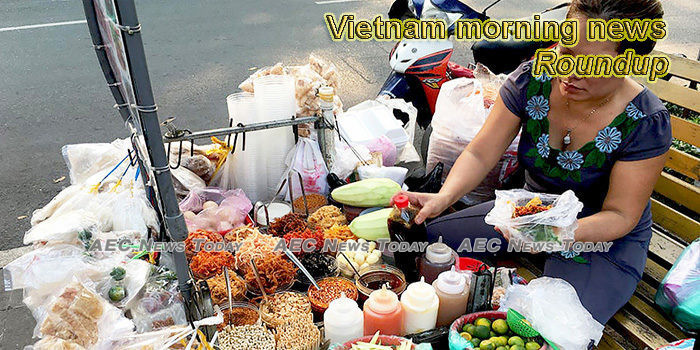 Vietnam Shipbuilding Capabilities in the Headlines With Patrol Vessel Deliveries to Nigeria
The developments highlight Hanoi’s ongoing ambitions to increase the global reach of its shipbuilding capabilities.
— The Diplomat

Vietnam misses 2019 seafood export target of USD 10.5 billion
Once again, Vietnam has failed to deliver on its seafood export value goal, as sales of key commodities including shrimp and pangasius, were lower than previously expected in 2019.
— Seafoodsource

182 rice traders certified as eligible for rice exports
The Ministry of Industry and Trade has granted 47 certificates of eligibility to rice export businesses over the past year, lifting the number of rice exporters to 182 traders.
— Viet Nam News

HCM City banks to ensure ATMs cope with extra demand during Tết
The State Bank of Vietnam’s HCM City office has taken measures to ensure workers get their salaries and bonuses paid smoothly before Tết (the Lunar New Year) and ATMs work without a hitch during the holidays, which begin on January 24.
— Viet Nam News

U.S. Furniture Industry Eyes Cambodia as Vietnam’s Wages Rise
A shortage of workers in Vietnam — a huge beneficiary of the U.S. trade war with China — is getting severe enough that some furniture makers are now scouting Cambodia and Bangladesh for factories, according to one industry chief executive.
— Bloomberg

Vietnam’s economy shines in 2019 but concerns exist for 2020
Uncertainty and high risks impeded growth momentum as a consequence of geo-political confrontations and a conflict between investment liberalisation and protectionism, not to mention climate change.
— Eleven Myanmar

Việt Nam’s GDP to ease slightly in 2020
Việt Nam’s GDP growth would reach 6.8 per cent from the 7.02 per cent posted in 2019, mainly due to a slowdown in the industrial sector, analysts from Fitch Solutions forecast.
— Viet Nam News

Vietnam,Cambodia joint victory over Pol Pot regime was milestone
After taking control of Cambodia in April, 1975, Pol Pot’s regime conducted barbaric policies against its own nation and hatred actions against Vietnam.
— Khmer Times

Welsh ministers accused of ‘cosying-up’ to Vietnam over education links
A Welsh minister has defended her government’s work with Vietnam after a Conservative assembly member accused it of “cosying-up” with the communist country.
— BBC

Việt Nam needs to change policy or lose out in Industry 4.0
Việt Nam needs a “revolution in its policy-making mind-set” before it can take advantage of the fourth industrial revolution, said Phạm Xuân Hòe from the Banking Strategy Institute, at a forum in Hà Nội yesterday.
— Viet Nam News

Large-cap companies end 2019 lower from their debuts
Three large-cap companies that debuted on the Ho Chí Minh Stock Exchange (HoSE) in 2019 saw their shares beaten by the benchmark VN-Index at the end of the year.
— Viet Nam News

Hanoi to trim off 10 media outlets in 2020
Hanoi’s move is in line with the government’s press reshuffle plan by 2025 with an aim to reinforce pubic trust in the society and combat fake news and disinformation.
— The Hanoitimes

Firms urged to monitor exports to China
The Import and Export Department under the Ministry of Industry and Trade urged firms to closely watch exports of agricultural products to China to prevent goods getting stuck at border gates before and after the Tết (Lunar New Year) holiday.
— Viet Nam News

PwC, Deloitte receive ‘good’ accreditation in 2019
Two auditing firms were graded “Good” by the State Securities Commission (SSC) regarding the quality of their services in 2019, while eight others were deemed “Acceptable”.
— Viet Nam News

Rich-poor gap in Vietnam epitomised by Hanoi’s Old Quarter, where people live in poverty next to banks and boutiques
“If anyone offered me a bigger house in exchange for my leg, I would give it to them in a heartbeat,” says Vietnamese delivery man Hoang Van Xuan, a 56-year-old who lives in a tiny decrepit attic in Hanoi, in the moneyed commercial centre known as the Old Quarter.
— South China Morning Post

Phú Thọ to lure investment into new IPs
Once established, the parks will open up opportunities for the province to lure new domestic and foreign investors, contributing to socio-economic development, it said.
— Viet Nam News

Procedures for starting a business to be cut this year
Việt Nam would strongly cutting the number of procedures needed to start a business this year as an effort to improve the country’s business climate.
— Viet Nam News