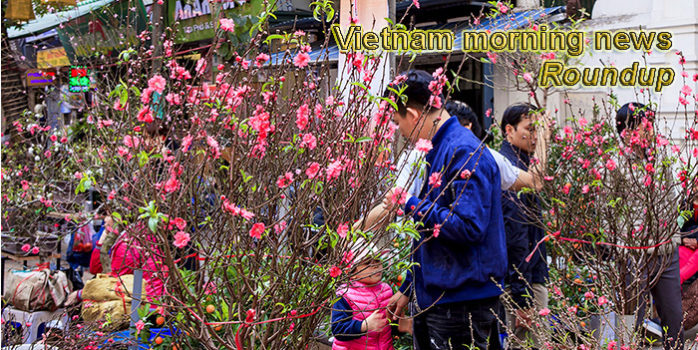 3 Insights into 2020 Prospect of Vietnam’s E-commerce
2019 was a year of many surprises for the Vietnamese e-commerce sector: new ambitious players joining the heated competition, previously formidable companies abruptly leaving the market, and strong positive movements from the big brands.
— Vietnam Insider

Vietnam aims at US$ 5 billion in fruit & vegetable exports in 2020
According to a spokesperson from the Vietnam Fruit and Vegetable Association (VINAFRUIT), the fruit and vegetable sector aims to gross $5 billion from exports this year on the back of new-generation free trade agreements.
— Fresh Plaza

Vietnam grants investment decision to US$4-billion LNG project
This is the biggest foreign direct investment project in the Mekong Delta so far, scheduled to become fully operational by the end of 2027.
— The Hanoitimes

Vietnam to build maritime militias in 14 coastal provinces
This kind of military force will be entrusted two missions namely sovereignty protection and economic development.
— The Hanoitimes

EU-Vietnam free trade deal gets green light in trade committee
The Committee on International Trade backed the free trade and investment protection agreements between the EU and Vietnam on Tuesday.
— Fresh Plaza

Construction begins on flagship 48 MW wind farm in Vietnam
Climate Fund Managers (CFM), the manager of the Climate Investor One facility (CI1), is pleased to announce that construction has begun on one of its flagship projects, a 48 MW near-shore wind farm in Tra Vinh province, Vietnam.
— Power engineering int

No Case Of New Coronavirus Detected In Vietnam
Two Chinese people from Wuhan City who were in Vietnam were tested negative to the virus. They were discharged from hospital and returned to their country, the department said.
— Vietnam Insider

Vietnam’s Mobile Payments Landscape Sees Strong Developments
Vietnam’s mobile payments landscape has continued to evolve on the back of strong growth and expansion coming from industry players, investment deals, and efforts by the government to establish a favorable environment for the industry to thrive.
— Fintech News

Austal secures $15.5m ferry work for Vietnam
Henderson-based shipbuilder Austal has picked up more work for its Vietnam operations with a $15.5 million contract for a 41m, high-speed catamaran.
— The West

Vietnam to rebuild defunct palace and first writing school
The central province has commenced construction on a memorial park in honour of the Thanh Chiêm Palace – the first school of Vietnamese romanised script – in Điện Bàn town.
— The Star Online

How the Vietnam War Shaped U.S. Immigration Policy
The makings of our modern resettlement system can be traced back to the fallout of the Vietnam War, a cascade of international crises stoked by the U.S.
— jstor

EU lawmakers give initial backing to Vietnam trade deal
EU lawmakers gave initial backing on Tuesday for a free trade agreement struck with Vietnam, the bloc’s most comprehensive such pact with a developing country and a sign that Europe has an appetite for a more expansive trade policy.
— Hellenic Shipping News

Vietnam’s all-women mine clearance teams work to remove legacy of war
Inching across a field littered with war-era landmines, a team of women in the central Vietnamnese province of Quang Tri work to clear unexploded ordnance. Their efforts are helping to remove a deadly legacy of the Vietnam war that has killed tens of thousands of people since the conflict ended in 1975.
— South China Morning Post

Local markets in central Vietnam, a magnet for foodies
Located in the centre of Da Nang city, the three-storey market faces Quang Trung and Ong Ich Khiem streets and is easy to find. It’s open from 6am till around 7.30pm.
— VietnamPlus

WEF wants to speed up Industry 4.0 Center project in Vietnam
The center would be among the WEF’s global network of Industry 4.0 centers.
— The Hanoitimes

Twelve SOEs have losses in 2019: report
The Ministry of Finance has revealed that twelve of 136 wholly state-owned enterprises had posted losses of VNĐ720 billion (US$30.9 million) in the first half of last year, and six others faced warnings regarding financial security.
— Viet Nam News

Vietnam says only 20% of country’s asset managers make profits
Only one in five fund managers in Vietnam yields profits, the country’s State Securities Commission (SSC) said. Pham Hong Son, SSC vice-chairman, said the industry’s assets under management expanded 20% to USD13.4bn in 2019, but that only ten out of the country’s 47 fund managers are making a profit and expanding in the market.
— Asia First

Iran plans to promote investments in Vietnam
The move is intended for Iranian businessmen and traders to become acquainted with the business potential of Vietnam and having more vigorous presence in this market.
— The Hanoitimes

Banks stocks propel market
Shares made good gains on Tuesday thanks to the push from banking stocks.
— Viet Nam News

SSI shrugs off market volatility to achieve targets
SSI Securities Corporation achieved consolidated revenues of VNĐ3.3 trillion (US$142.8 million) last year, or 112 per cent of the target it had set, and its pre-tax profit target of VNĐ1.01 trillion ($43.7 million).
— Viet Nam News

Brokerages appoint new CEOs to boost performance
Securities firms are shaking up their leadership ranks at the beginning of the year as they want to lift performance amid fiercer market competition.
— Viet Nam News

High demand for rare fruits in Mekong Delta
In the Cửu Long (Mekong) Delta, traders and consumers scour for unique fruits such as purple longan, red-flesh orange and jabuticaba and do not mind paying high prices for them.
— Viet Nam News