Thailand morning news for May 25 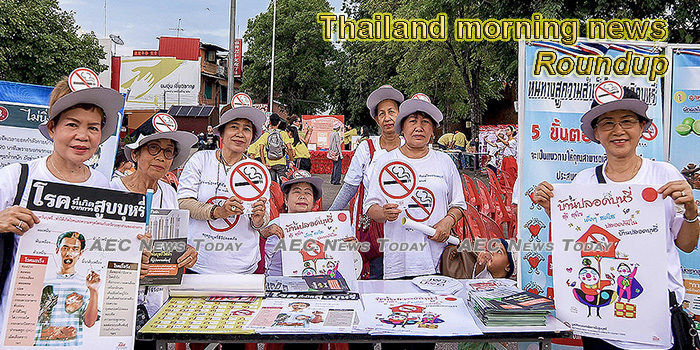 Mass prayers held to celebrate end of Ramadan
Muslims across the country attended mass prayers on Sunday to welcome Hariraya after the end of their fasting month.
— Bangkok Post

THAI loses state status in share sale
Transport Minister Saksayam Chidchob has confirmed that debt-ridden Thai Airways International (THAI) has lost its state enterprise status after the Finance Ministry sold off a 3.17% stake in the national carrier to the Vayupak 1 Fund on Friday.
— Bangkok Post

Thailand reports no new coronavirus cases for 4th time this month
Thailand on Sunday (May 24) reported no new COVID-19 cases and no new deaths, maintaining the total to 3,040 confirmed cases and 56 fatalities since the outbreak began in January.
— CNA

Thai Covid-19 Administration team and leaders to discuss Curfew and Phase Three business openings Wednesday
General Somsak Rungsita, Secretary-General of the National Security Council, or NSC, and a member of the advisors and committee to the Center for Covid-19 Situation Administration (CCSA), spoke to the Thai media this morning about the week ahead for Thailand and what it would bring.
— The Pattaya News

Thailand depending on Chinese travellers for tourist reboot
Thailand is looking to China to rebuild its battered travel industry. As the Covid-19 pandemic subsides in Asia, countries are discussing the idea of “travel bubbles,” in which reciprocal nations establish guidelines that enable their citizens to move freely across their borders.
— The Thaiger

Pattaya hoteliers complain about alleged “quarantine kickbacks”
Hoteliers in Pattaya have made an official complaint about a group of people, claiming to be officials who can ensure their properties will be chosen as quarantine centres, are demanding kickbacks of up to 40%.
— The Thaiger

Health chiefs eye human trials of vaccine this year
The government is hoping to start testing its locally manufactured Covid-19 vaccine on humans before the end of the year, according to Suvit Maesincee, Minister of Higher Education Science Research and Innovation.
— Bangkok Post

Thai exports up for second month in a row
Despite limitations caused by the global spread of COVID-19, Thailand still saw its export sector grow by 2.12 percent in April this year, the second consecutive month of expansion.
— Newsline (video)

Five tipped to lead THAI comeback
Five leading businessmen are expected to be nominated as administrators of a rehabilitation plan for debt-ridden Thai Airways International (THAI) which has now lost its state enterprise status, a source at the national carrier said.
— Bangkok Post

COVID-19: Nigerians stranded in Thailand to pay nearly N300,000 ‘quarantine fees’ each
The federal government has directed the Nigerian Mission in Thailand not to evacuate any stranded individual who fails to pay for his accommodation and feeding charges ahead of repatriation.
— Premium Times

Conduit for Charity inspires Thais to contribute
Earlier this week we had the “COVID-19-Inspired Charitable Acts” report on private citizens helping those in need, one example being Thai song artist and vocal coach Gob-Saovanit Navapan.
— Newsline (video)

Cash relief for civil-servant farmers vetoed
The Finance Ministry has turned down the Agriculture and Cooperatives Ministry’s proposal to offer 5,000 baht in cash relief to 91,000 civil servants farming for supplementary income, saying they are unqualified because they earn salaries.
— Bangkok Post

Workers protest unfair treatment amid outbreak
More than 20 employees have lodged complaints with Government House about unfair treatment, including forced resignations, by employers amid the Covid-19 outbreak.
— Bangkok Post

Proposed Pattaya monorail paints a radical future by 2030
The proposal to fund a Pattaya City monorail project has taken a major step forward with the announcement of a 70 million baht feasibility study to link with much wider infrastructure developments.
— Pattaya Mail

Thailand’s House session ready to reopen amid COVID-19 pandemic
Disease control measures are in place for the first House session of this year, set for May 27, amid the coronavirus disease 2019 (COVID-19) pandemic.
— Pattaya Mail

Health and safety to come first for tourism in Thailand when travel resumes after Covid-19. Hygiene measures offer a clean break for visitors
“My health and safety is going to be my top priority when I can travel again, and this will play a big part in where I choose to go,” says 32-year-old Malaysian business consultant and frequent traveller Putri Fazura.
— South China Morning Post

New Registration required at all malls
Visitors to Thailand’s newly reopened malls are required to report their entry using a web based application. More details in this report.
— Newsline (video)

Ten new normal behaviors of Thai people – Suan Dusit Poll
Most Thai people have changed their tourism behavior by visiting destinations and using transport which are safe, according to an opinion poll by Suan Dusit University.
— Thai PBS News

Opinion: May Is A Cruel Month for Thai Democracy
The two political bloodshed that took place in the same month of May may be 18 years apart, but they share a big similarity that should bother anyone who cares about accountability in this country.
— Khaosod English

Pattaya Council mulls a mass transport monorail system
Nothing like the middle of a pandemic to announce a new monorail project. Undeterred, the Pattaya City council have announced a new 9 kilometre monorail as part of its Eastern Economic Corridor projects.
— The Thaiger

Written Off by Society as ‘Crazy,’ 600,000 Thais Now Live With Schizophrenia
A man who always dressed up as a Hindu priest would sometimes smash his forehead on the pavement. Other times he heard Somdej Toh, a widely revered 19th century monk, telling him to throw money into a pond.
— Khaosod English

Remembrances of Red Trauma (12) – The specter of the “men in black” continues to haunt
Ten years after the violent clashes in April-May 2010, the role of the so-called “men in black” remains shrouded in doubt.
— Isaan Record

Thailand delays data law by a year as COVID-19 stalls preparations
Thailand has given businesses another year to comply with a new personal data protection law due to the impact of the coronavirus crisis on their preparations.
— CNA

Old risks fade, new risks emerge
May has been the month when investment and economic reality diverged. The global economic contraction is deepening.
— Bangkok Post

15 days for BoT governor applications
The application period for the next governor of the Bank of Thailand will last for 15 business days, from May 26 to June 16, and the shortlist of candidates will be concluded by July 2.
— Bangkok Post

Phuket firefighters rescue dogs from blazing home
Firefighters in the southern province of Phuket today rescued 2 dogs from a burning house in the island’s Kathu district.
— The Thaiger

Man ‘kills son after affair with wife’
SONGKHLA: A man has admitted he killed his own son and buried the body in a forest in Na Mom district of this southern province, police said.
— Bangkok Post

Thai-made vaccine could be available sometime next year
Human trials of a locally manufactured Covid-19 vaccine could begin as early as the end of the year, according to Thailand’s Minister of Higher Education.
— The Thaiger

Yoovidhya family makes new push in China
Thailand’s Yoovidhya family is preparing to invest US$150 million to re-establish the Red Bull energy-drink brand in China, where they have been involved in a protracted battle of billionaires with a former partner.
— Bangkok Post

COVID-19: Jobless Thai elephants make long trek home as tourists disappear
Caravans of elephants and mahouts have embarked on a long journey through the hills and forests of northern Thailand.
— CNA