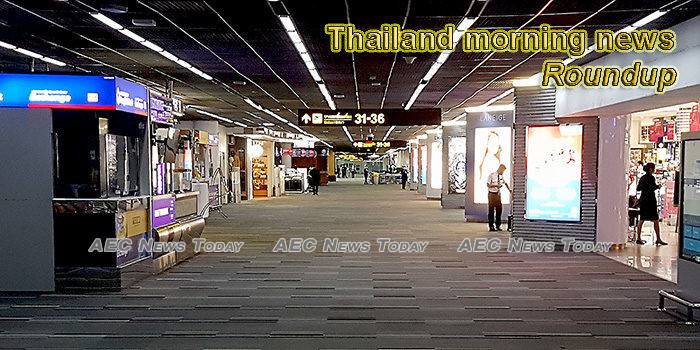 Prayut wants Thais to prepare for the worst, asks for trust in his leadership
Prime Minister Prayut Chan-o-cha told the Thai people on Wednesday to expect the worst in the next several weeks or months as the coronavirus continues to ravage the country and as more stringent measures being imposed are going to affect their daily lives.
— Thai PBS News

Foreigners banned from entering Thailand, with a few exceptions
Since the Thai PM updated yesterday’s decree, announcing that the State of Emergency will start from tonight, midnight, he has since started rolling out additional details.
— The Thaiger

Factory output down again
Thailand’s manufacturing production index (MPI) contracted for the tenth straight month in February, down 5.19% from a year earlier, hit by lower production of cars, tires and sugar, the industry ministry said on Wednesday.
— Bangkok Post

Masks a must for all train passengers
Starting today commuters using all rail systems, including BTS and underground trains, are required to wear masks. Face masks will be available for sale at entrances to train stations…
— Thai PBS News

Thailand bars entry as state of emergency bites
Thailand barred entry into the kingdom late on Wednesday, enacting sweeping emergency powers in a bid to stem the local spread of the coronavirus outbreak.
— CNA

Curfew on tourists, foreign and Thai, in Phuket
The Phuket Governor has been forced to announce an emergency curfew to prevent a repeat of last night’s spontaneous gatherings on Patong Beach.
— The Thaiger

Stranded Foreigners Ordered to File for Extensions at Immigration
Due to the ongoing worldwide travel disruption caused by the coronavirus epidemic, the Thai immigration said it will allow foreigners marooned in Thailand to extend their stay for up to 30 days.
— Khaosod English

No curfew yet, but partial lockdown is here — Wissanu
The government has no plans for the time being to impose a curfew to stem the spread of the coronavirus but will stringently enforce restrictions on travel and gatherings as…
— Thai PBS News

Prayut: I am in charge of this mission
Prime Minister Prayut Chan-o-cha told the Thai people on Wednesday to expect the worst in the next several weeks or months as the coronavirus continues to ravage the country and as more stringent measures being imposed are going to affect their daily lives.
— Thai PBS News

Banks ‘will be open’ during emergency
The Bank of Thailand and other financial institutions said on Wednesday they would keep as many branches open as possible to ensure business can continue during the Covid-19 emergency.
— Bangkok Post

Army Bases Ditch Names of Democratic Revolutionaries
His Majesty the King on Tuesday approved a name change for two military bases, ditching the names of two revolutionaries behind the 1932 democratic revolt.
— Khaosod English

Hot with showers in the North, cloudy in the South
Thailand’s Meteorological Department said today is a “hot to a very hot day for the North and the Northeast” as a thermal low covers upper Thailand.
— The Thaiger

Energy Ministry to cut price of CNG by 3 baht
The Energy Ministry announced on Wednesday that it will reduce the retail price of compressed natural gas (CNG) for public transport by three baht per kilogramme for three months, effective April 1.
— Bangkok Post

Fit to fight the virus
The Covid-19 outbreak could not deter people from keeping themselves fit at Lumpini Park. (Video by Jetjaras Na Ranong)
— Bangkok Post

Chonburi Governor orders additional restrictions, closes shopping malls other than food and pharmacies, closes access to Koh Larn and Koh Sichang for non residents and more
As announced moments ago on the Chonburi Public Relations social media page, the Chonburi Governor, Phakarathorn Tienchai, has ordered additional closures and restrictions for the entire Chonburi province, which includes Pattaya.
— The Pattaya News

Hundreds of Thais stranded in New Zealand, denied boarding without documentation
A Facebook post from a Thai Airways aircrew says hundreds of desperate Thais are trapped in New Zealand, denied boarding on a Bangkok-bound flight as they couldn’t provide the mandatory “fit-to-fly” letter now required of Thai nationals, and proof of residency once in Thailand.
— The Thaiger

Chicken eggs will not run out in Thailand
Poached, scrambled or fried, we’re unlikely to run out of eggs during the current emergency crisis. Thai chicken farm owners confirmed today that there will be no shortage of chicken eggs in Thailand.
— The Thaiger

Gov’t Says Virus Emergency Rules Will Follow – But Won’t Say What They Are
PM Prayut Chan-o-cha went on national TV again on Wednesday to announce that the state of emergency will formally come into effect tomorrow, but failed to say what specific measures will be taken.
— Khaosod English

Opposition Slams Prayut’s Silence on Emergency Powers
Opposition politicians on Wednesday urged PM Prayut Chan-o-cha to clarify on what powers and special measures will be implemented in his emergency decree on the coronavirus pandemic.
— Khaosod English

2 More Medical Workers Infected With Coronavirus
The Ministry of Public Health on Wednesday said 107 new cases of coronavirus infection, along with two medical personnel, were reported in Thailand.
— Khaosod English

Thai oil refiners said cutting output as demand falls
Oil refineries in Thailand are reducing their run rates by 10% to 20% after measures taken by the government to curb the spread of the coronavirus caused domestic fuel demand to fall sharply, two sources familiar with the matter said.
— Bangkok Post

The Soul of Molam (6) – Turning the music scene upside down, new Isaan singers find their voice
Luk thung-molam songs penned by independent and previously unknown Isaan singers are racking up millions of views on YouTube. How did this new generation of artists gain such massive success in Thailand’s mainstream music culture?
— Isaan Record

April Thai lottery postponed
The Thai national lottery scheduled for April 1 will now take place on May 2, and the other April 16 and May 2 lottery draws have been cancelled.
— The Thaiger

Thailand Closes Down Border, Tells Elderly Citizens to Stay Home
The first raft of measures issued under the emergency decree on Wednesday instructed senior citizens and those with vulnerable health conditions to refrain from leaving their homes unless absolutely necessary.
— Khaosod English

Opinion: Prayut needs a real “conversation” with the people
The decision on Tuesday to impose a nation-wide state of emergency was supposed to be the most drastic action to be taken by the Prayut government in its fight against the coronavirus pandemic that has been ravaging the country.
— Thai PBS News