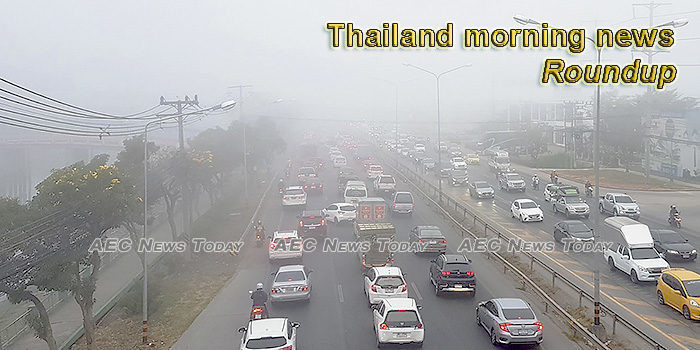 How Thai economy will perform next year?
Thailand’s economy is likely to increase around 2.7-3.0 percent, according to the predictions by several economic institutions.
— Thai PBS News

Statues of 1932 Revolt Leaders to be Removed
Memorials to two leaders of the revolution that toppled absolute monarchy 87 years ago are due to be removed from public view, an heir of one of the two men said Saturday.
— Khaosod English

Poll – Coronation Ceremony happiest event of 2019 for Thai people
The Coronation Ceremony of His Majesty the King in May was the happiest event of the year for Thai people, while the economic slowdown and high consumer prices were the biggest downers, according to an opinion survey conducted by Suan Dusit Poll of Suan Dusit University.
— Thai PBS News

False killer whales spotted off Phang Nga
Around 20 false killer whales have been spotted near an island in Phang Nga province. The manager of Wow Andaman Tour has reported that a tour group spotted them off Koh Miang Island in the Mu Koh Similan National Park off the Phang Ngan coast in the Andaman Sea.
— The Thaiger

Thanathorn ‘most suited’ to be prime minister: Poll
Thanathorn Juangroongruangkit is the most suitable person for the post of prime minister and his Future Forward Party (FFP) the best party to lead the country in the current situation, according to a survey by the National Institute for Development Administration, or Nida Poll.
— Bangkok Post

Dam testing in China to affect eight Mekong River provinces
Eight provinces along the Mekong River have been told to brace themselves for a dip in water levels between Jan 1-4 as tests at Jinghong hydroelectric power station in China’s Yunnan province are expected decrease of water outflows.
— Bangkok Post

Thailand business transforms as strong baht bolsters investing overseas
Thailand’s economy has suffered this year as a 7 per cent surge in the baht against the dollar hit exporters and tourism groups, slowing growth to its lowest rate since 2014.
— Financial Times

2019 a False Dawn for Democracy in Thailand, Analysts Say
When the coterie of top generals that toppled Thailand’s government in 2014 announced the long-awaited elections that were held in March, they promised a speedy return to democracy after five years of military rule.
— VOA

Parliament sets up a medical cannabis evaluation committee
The Ministry of Public Health is pushing for the removal of cannabis and Kratom from the national list of narcotics, following the introduction of medical cannabis in Thailand.
— Newsline (video)

Ex-communist: Thailand more committed to fulfil promises
Thailand has shown a tremendous commitment to fulfil its promises to former members of the Communist Party of Malaya (CPM) since signing the Hat Yai Peace Accord 30 years ago.
— Malaysiakini

SRT signs southern dual track railway signaling contract
Infrastructure development has been top of the agenda for the government to improve the quality of life and the Thai economy.
— Newsline (video)

Airport plans up in air
While the Prayut Chan-o-cha government struggles to invigorate a tepid economy, it is also fuelling the slowdown by its year-long delay on a decision on the Suvarnabhumi airport upgrade.
— Bangkok Post

Agriculture Min outlines measures to aid farmers
Among the seven Ministry of Agriculture and Cooperatives’ initiatives set for 2020 are measures to do with water management to avoid drought and caring for farmers and fishermen.
— Newsline (video)

Fight for justice never ends
The Department of Special Investigation (DSI) reached a critical turning point in its probe into the disappearance five years ago of Karen activist Porlajee “Billy” Rakchongcharoen.
— Bangkok Post

Chinese domination of Thailand’s e-commerce sector to grow further with the Eastern Economic Corridor
A Thai e-commerce expert has described the sector as dead to Thai internet entrepreneurs looking for opportunity as the country’s market for online sales through e-commerce platforms has come to be dominated by two firms Lazada and Shopee which are effectively Chinese owned although headquartered in Singapore.
— ThaiExaminer.com

Indian visitors to Thailand help break tourist arrival record
With a few days left to go in 2019, Thailand has already stepped over last year’s record arrivals of 38,260,000.
— The Thaiger

Slow growth hits airlines
Most people would be all too willing to open their wallets for cheap flight tickets.
— Bangkok Post

Key trafficker of Rohingya arrested
A man, 56, was arrested for allegedly smuggling at least 200 Rohingya migrants into the country destined for Malaysia, with the most recent group of 14 migrants arrested in the South.
— Bangkok Post

Turtle release at Maya Bay to commemorate the 15th anniversary of the Tsunami
Koh Phi Phi Leh’s most famous tourist attraction, Maya Bay has been a controversial topic in recent years. The bay remains closed. However, tourists are still able to visit the National Park to swim and snorkel along the outskirts of the bay.
— The Thaiger

Bangkok tap water may turn brackish as seawater intrudes into Chao Phraya
The Office of National Water Resources (ONWR) is keeping a close watch on the intrusion of seawater into the Chao Phraya River, to the extent that it may affect the production of tap water.
— Thai PBS News

Tourist arrivals hit record of 39m
Thailand has broken its annual tourism record with the arrival of 39 million international tourists this year, up from about 38 million last year. The 39 millionth tourist was from Russia.
— Bangkok Post

Man arrested with live grenade at Pattaya checkpoint
A 26 year old Buriram man has been caught with a live grenade at a checkpoint in Pattaya. Police say the man, named only as “Seksan,” was acting suspiciously as he went through the checkpoint on Soi Ko Phai in central Pattaya.
— The Thaiger

Probe into suspected foreign involvement in illegal resorts in Chiang Mai
The Royal Forest Department has launched an investigation to determine whether Chinese investors own stakes in two resorts at Doi Mon Jam in Mae Rim district of Chiang Mai province, which were raided by its officials last week.
— Thai PBS News

Property taxes to remain unchanged
The land and building median price set by the state will remain unchanged next year, saving many owners from having to pay higher tax for their property, the Treasury Department said.
— Bangkok Post

Thai man caught with illegal loaded firearm in Pattaya, allegedly shooting in air on public street
A 42 year old Thai man was arrested early this morning not far from the same checkpoint in Pattaya that earlier in the evening caught a 26 year old man with a live grenade.
— The Pattaya News

Unemployment fears on the rise
Labour rights advocates have questioned the government’s claim of more businesses opening shop as opposed to closing down, insisting that new companies may not be hiring as many workers as expected.
— Bangkok Post

Free Stuff for New Year’s: Tollway, (Some) BTS Rides, and Plant Seeds
To ring in 2020, the Thai government is waiving fees for some tollways, BTS rides, and national parks.
— Khaosod English

One of Thailand’s last Chinese opera troupes lights up Bangkok
An ancient world of swords, warriors and folklore roars to life on the darkened street, offering a momentary escape from the modern-day bustle of Bangkok’s unstoppable development.
— CNA

Slow growth hits airlines
Most people would be all too willing to open their wallets for cheap flight tickets. But dumping ticket prices to stay ahead of the competition could cause more harm than good on airlines if they are not careful.
— Bangkok Post

Minister of Sports and Tourism visits Pattaya, Pattaya Business owners and leaders meet about tourism issues in Pattaya
The Thailand Tourism and Sports Minister, Pipat Ratchakitprakan, arrived at the Pattaya City Hall today and was welcomed by the Chonburi Governor Pakkathorn Teanchai and the Pattaya City Mayor Sonthaya Khunpluem.
— The Pattaya News

‘Run Against Dictatorship’ Moved to Park in North Bangkok
Organizers of a sports event doubling as a rally against PM Prayuth Chan-ocha said Thursday they are moving to a park in northern Bangkok.
— Khaosod English

Driver Takes Down 12 Utility Poles, Injuring 7
Seven people were wounded after a pickup truck driver crashed into a utility pole Friday, causing widespread damage and cutting off electricity at a busy stretch of road in Samut Prakan.
— Khaosod English

Khaosod English’s Top 6 Watched Videos of 2019
Even as we are striving to deliver our readers the freshest news every day, we also continue to produce featured videos which captured moments that defined 2019.
— Khaosod English