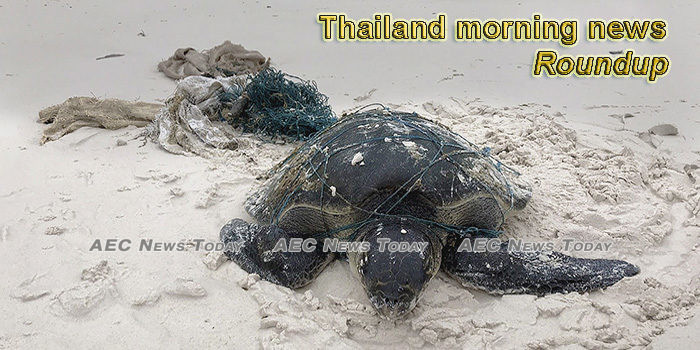 Industrial group supports Thailand joining CPTPP
The Joint Standing Committee on Commerce, Industry and Banking (JSCCIB) supports the move to make Thailand a member of the Comprehensive and Progressive Agreement for Trans-Pacific Partnership (CPTPP) to boost the nation’s international trade in the post-pandemic period.
— Bangkok Post

THAI swoops to protect planes from seizure
Thai Airways International (THAI) has petitioned courts in three countries to protects its assets — including its aircraft operating scheduled flights — from being seized by its creditors, said government spokeswoman Narumon Pinyosinwat on Tuesday.
— Bangkok Post

Prepare for delays in re-opening international borders
“The third or fourth quarter of 2020.” That’s as precise as deputy PM Somkid Jatusripitak could say when Thailand would re-open its borders for foreign tourists.
— The Thaiger

2 new Covid-19 cases, both imported (June 9)
Today there were 2 Covid-19 cases amongst returning Thai citizens from overseas.
— The Thaiger

Gov’t Aims for 100,000 COVID-19 Saliva Tests by End-June
Thailand’s Center for COVID-19 Situation Administration (CCSA) on Monday said that the government is on an aggressive campaign to conduct proactive COVID-19 tests on 100,000 people across the country before the end of June.
— Khaosod English

Litigious Farm Loses Defamation Cases Against Activists
A court in Thailand has dismissed criminal defamation charges against two people who were among more than 20 targeted in various cases by a poultry company in what critics say is a campaign of legal intimidation.
— Khaosod English

MPs walk out of Covid oversight committee meeting
Opposition lawmakers walked out of a parliament meeting on Tuesday to protest against a lack of details in the government’s plan to reallocate 88 billion baht to a central fund to fight Covid-19 and rehabilitate the economy.
— Bangkok Post

Group threatens rally over fishing quotas
A group of trawler owners yesterday vowed to stage a big rally in Bangkok if the Department of Fisheries is adamant on imposing new fishing quotas, a move to appease the European Union after it called on the kingdom to follow sustainable measures in the seafood industry last year.
— Bangkok Post

Thailand May Lose Investors as Most Expensive Asian Stock Market
Thailand has become the most expensive stock market in Asia, threatening its prospects for additional near-term gains and foreign buying.
— BloombergQuint

Over 28,000 projects eye NESDC aid
Some 28,425 projects worth up to 593 billion baht have applied for a 400-billion-baht budget set for economic and social rehabilitation, according to the National Economic and Social Development Council (NESDC).
— Bangkok Post

Projects proposed for emergency loan budget
The National Economic and Social Development Council (NESDC) has revealed that the NESDC office has received proposals for 28,331 projects, worth some 370 billion baht from government agencies.
— Newsline (video)

Thailand’s housing market strengthening
Nationwide house prices rose by 5.69% in Q1 2020 from a year earlier, an improvement from the previous year’s 2.21% increase and the biggest growth since Q1 2018. House prices increased 3.13% q-o-q during the latest quarter.
— Global Property Guide

PM defends emergency decree
Prime Minister Prayut Chan-o-cha on Tuesday defended the use of the emergency decree to curb the spread of Covid-19, calling it a legal tool for the authorities to enforce virus control measures.
— Bangkok Post

Thai people more alert to risks of COVID-19 infection
A survey has found that people significantly improved their protection against the coronavirus disease 2019 (COVID-19) in May after previous recklessness.
— Pattaya Mail

Coronavirus: Thais travelling domestically in droves amid lockdown easing, prompting authorities to urge caution
Thais are travelling to other parts of the country in droves as the country is gradually easing its partial lockdown measures, including inter-provincial travel restrictions, prompting reclosure warnings from officials.
— The Straits Times

Ko Tao, island in the gulf of Thailand, praised for strong coral reef conservation
The United Nation Environment Programme (UNEP) via the Hello Kitty Global Channel, in cooperation with the Department of Marine and Coastal Resources, Thailand’s Ministry of Natural Resources and Environment, has named Ko Tao as the island with a strong community committed to coral reef conservation.
— Pattaya Mail

From Cold War to coronavirus, Thailand’s hero grandma fights to protect villagers from Covid-19
For the past 38 years, Surin Makradee has been giving basic advice to people in her village in central Thailand’s Ang Thong province as a village health care volunteer.
— South China Morning Post (video)

Woman shot dead in land dispute
A local politician shot a woman dead while arguing with her over the sale of a block of land on Monday night, police in Ko Kha district of this northern province said on Tuesday.
— Bangkok Post

Students held for ‘white bow’ protest
Police have held four students trying to tie white bows at public places in Bangkok as a symbolic gesture for justice and against dictatorship.
— Bangkok Post

Finance Ministry considers incentives for Thais who spend on local tourism
Thailand’s Finance Ministry is to roll out an incentive scheme to encourage Thai people to travel and spend domestically, in order to revive the local tourism industry, hard hit by the COVID-19 pandemic.
— Thai PBS News

Probe into Defence Ministry’s plan to spy on people through phones
Political activist Srisuwan Janya will lodge a petition with the National Human Rights Commission (NHRC) on Wednesday, seeking an investigation into the conduct of the Ministry of Defence (MoD) and the Disease Control Department (DCD) for demanding the public’s smart phone usage data from service providers.
— Thai PBS News

Activists Fined After Campaigning for Abducted Dissident
Police on Tuesday arrested a group of student activists while they were holding a rally against the alleged abduction of anti-government dissident Wanchalearm Satsaksit, who went missing in Cambodia last week.
— Khaosod English

Security Officers Take Down Mural, Posters of Missing Activist
A stenciled mural showing fugitive activist Wanchalearm Satsaksit disappeared less than 24 hours after it was painted, and other posters demanding to know his whereabouts were also taken down.
— Khaosod English

Gov’t Proposes 3,000 Baht Handout to Boost Tourism
The government on Tuesday proposed several measures to revive the devastated tourism industry as the coronavirus pandemic appears to be winding down.
— Khaosod English

New food delivery apps seeking a bite
Competition in food delivery apps is expected to intensify as a series of newcomers jump into the 35-billion-baht market, with some aiming to leverage customer insights for their other businesses.
— Bangkok Post

MCOT mulls lawsuit against NBTC over compensation
State-owned public broadcaster MCOT is threatening to sue the National Broadcasting and Telecommunications Commission (NBTC) if the telecom regulator’s board meeting on Wednesday fails to reach a resolution on the amount of compensation it would give to the company for the 2600-megahertz spectrum recall.
— Bangkok Post

Cabinet approves subsidy rates for sugar cane farmers
The cabinet on Tuesday approved the rates of financial assistance to be paid to about 300,000 sugar cane growers nationwide, under a subsidy programme that is estimated to require 10 billion baht in state funding.
— Bangkok Post

Hoteliers to get one-year fee waiver
Hoteliers will get a waiver of the 40-baht fee per room per year until mid-2021 as part of Covid-19 relief.
— Bangkok Post

Smartphone imports down
Smartphone imports fell 20.6% year-on-year to 3.6 million units in the first quarter, chiefly because of the coronavirus pandemic, according to IDC Thailand, the local unit of the global research firm.
— Bangkok Post

Cambodia to probe Thai activist’s disappearance in Phnom Penh
Cambodian police will launch an investigation into the disappearance of exiled Thai political activist Wanchalerm Satsaksit, who was abducted in front of his apartment in Phnom Penh last Thursday.
— Thai PBS News

Thai Government considering possible extension of Emergency Decree among other options
Deputy Prime Minister Wissanu Krea-ngam signalled that the enforcement of the emergency decree, which is set to expire on June 30, could be extended in a press conference this week.
— The Pattaya News

Major Cineplex Faces Charges Over Fanmeet in Pandemic
Police said Tuesday they are looking to charge a downtown cinema for holding a celebrity fan event where attendants did not practice social distancing during the coronavirus pandemic.
— Khaosod English

‘It’s a bloodbath’: Bangkok restaurants devastated by booze ban
Restaurants that survived months of closure and can now only seat a fraction of their usual customers say the ongoing ban on alcohol is killing their businesses.
— Coconuts Thailand

Man accused of sexual assault, Goodness Foundation helps file complaint
A cleaner at an international school in Central Thailand is accused of allegedly sexually assaulting his 2 teenage daughters.
— The Thaiger

Former employee of Buriram dog shelter accuses owner’s wife of harassment
A former employee of a dog shelter in Buriram province, northeast Thailand, says she has had to leave her home and go into hiding after being harassed by the wife of the Frenchman who set up the shelter.
— The Thaiger

Partial Solar Eclipse To Darken Bangkok This Month
Thailand will witness a partial solar eclipse later this month, according to the national astronomical body.
— Khaosod English

Until Thailand reopens to world, gov’t will pay people to travel
Thailand could reopen to the world as soon as next month, and government officials are eyeing a tourism stimulus package to give the sector a shot in the arm.
— Coconuts Thailand