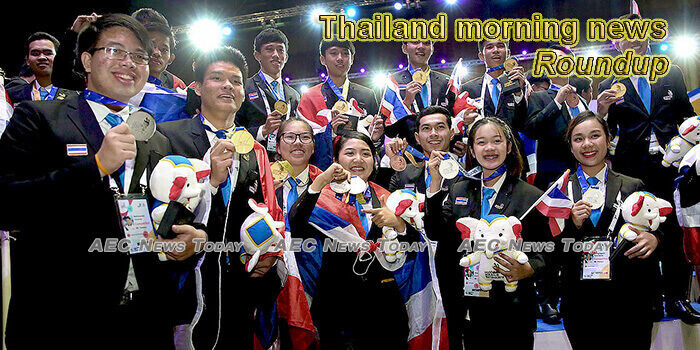 Uttama, 3 others resign from cabinet
Finance Minister Uttama Savanayana and three other members of the so-called Four Boys group announced their resignation from the cabinet on Thursday, effective immediately.
— Bangkok Post

Drought leaves province ‘dangerously low’ on water
The effects of drought are expected to severely hit parts of Prachaup Khiri Khan after the water at the major Pran Buri reservoir in the province recently dropped to a dangerously low level.
— Reliefweb

Medical tourism package will go ahead, but under strict control
Taweesin Visanuyothin, spokesperson for the Centre for Covid-19 Situation Administration (CCSA), said on Thursday (July 16) that Thailand’s medical tourism and wellness programmes will go ahead despite the discovery of two Covid-19 cases this week.
— The Nation

Air force commander blames Egyptian soldier fiasco on ‘loophole’
The Royal Thai Air Force chief ACM Maanat Wongwat finally responded on Thursday (July 16) to queries on the case of an infected Egyptian soldier, who along with other Egyptian military personnel was allowed to stay in Thailand from July 8 to 11.
— The Nation

Thailand to allow medical tourism within 2 weeks
The Centre for Covid-19 Situation Administration announced today that Thailand’s medical tourism and wellness programs will go ahead despite the controversy swirling around 2 Covid-19 cases this week – in Bangkok and in Rayong.
— The Thaiger

New rule on transit flights through Thailand
The Civil Aviation Authority of Thailand has banned all flights with Covid-19 infected passengers from transiting through Thailand after China banned two flights from here.
— Bangkok Post

Liquidity problems hurt startups as foreign investors stay away
Startup companies in Thailand are suffering from liquidity problems due to lack of investments from overseas while domestic fund operators are being more cautious amid the economic contraction due to the Covid-19 outbreak.
— The Nation

MP stands behind Prawit’s push for law on aerospace business
Bhumjaithai Party MP, Settapong Malisuwan, who is also deputy chair of a House committee on telecommunications, digital economy and society, said on Thursday (July 16) that he was backing Deputy Prime Minister Prawit Wongsuwan’s push for a law supporting aerospace businesses.
— The Nation

NSC insists virus cases won’t be used to extend decree
The National Security Council (NSC) insisted on Thursday two controversial Covid-19 cases involving a military official from Egypt and a nine-year-old girl from Sudan would not be used as an excuse to extend enforcement of the state of emergency set to expire at the end of this month.
— Bangkok Post

Prayut hints at reshuffle next month
Prime Minister Prayut Chan-o-cha has revealed that a cabinet reshuffle could take place next month after Finance Minister Uttama Savanayana and three others handed in their resignation letters with immediate effect yesterday.
— Bangkok Post

2nd-phase stimulus to fan out tourists
The Tourism and Sports Ministry aims to use the second phase of tourism stimulus to boost second-tier provinces and local economies by adding more subsidies for travellers who want to venture off the beaten track.
— Bangkok Post

Four firms to advise on THAI rehab
The board of Thai Airways International (THAI) has approved the hiring of four firms to assist in legal, accounting, business and financial matters as the company works on its debt rehabilitation plan.
— Bangkok Post

Thailand offers discounts on hotel rooms, air tickets and e-voucher in stimulus package
Online registration is now opened for public members to apply for discounts on domestic trips under the government’s scheme “Rao Tiew Duay Gan” scheme or “We travel together”.
— Pattaya Mail

Joint Vision Statement Brings New Twists in Thai-US Alliance
Before General James C. McConville, the chief of staff of the US army, was able to sign the Joint Vision Statement 2020 for the Thai-US Defense Alliance last Friday, he had to go through the stringent COVID-19 measures required under Thai law for foreign visitors.
— The Irrawaddy

Local Covid-19 infection report refuted
The chief of the Disease Control Department on Thursday morning refuted a report that a Thai woman in Bangkok might have been infected locally with the coronavirus disease.
— Bangkok Post

Thailand accepts World Bank’s climate change grant
The government has agreed to accept a 5 million U.S. dollar grant from the World Bank to reduce the emission of Hydro-fluoro-carbon Gas (HFC), which is one of the greenhouse gases affecting the globe’s ozone layer.
— Newsline (video)

Transport Ministry pledges to help country recover from COVID-19
The Transport Minister has highlighted benefits from transportation infrastructure development for post-COVID economic recovery in an exhibition, stressing that changes have been made to the ministry’s budget giving priority to projects that will yield concrete results and benefits to the general public.
— Newsline (video)

PM launches BCG Economy campaign
The government has signed an agreement with 18 partner agencies from the administration and the private sector to promote the Bio-Circular-Green (BCG) economic model for sustainability.
— Newsline (video)

Suan Sampran eco-park to go into full swing in August
Nakhon Pathom’s eco-park Suan Sampran will go into full operation on August 1, managing director Arut Nawarat said, adding that the decision was made because he had received many requests from people wanting to visit the park now that the lockdown has been lifted.
— The Nation

Beef farming gets boost from new govt insurance
A new government insurance campaign has been launched for Thailand’s more than 4.5 million beef farmers.
— The Nation

Nakhon Ratchasima reports 3 suspected Covid cases in locals who visited Rayong
The governor of Nakhon Ratchasima province, in the north-east of the country, has confirmed that 3 people there are showing signs of being infected with Covid-19.
— The Thaiger

Three suspected cases of Covid-19 in Nakhon Ratchasima do not have the virus
Three people who had recently been in Rayong during the same time period that an infected Egyptian Soldier broke quarantine and went to a shopping mall have been cleared of the virus.
— The Pattaya News

Over 1,600 people test negative for Covid-19 following Rayong and Bangkok exempted foreigner cases
1,603 people so far have tested negative for the Covid-19 Coronavirus following two well publicized incidents involving foreigners who had quarantine “exemptions” over the last weekend in Thailand.
— The Pattaya News

2 Rayong protesters arrested after trying to display signs during PM’s visit
Two protesters have ended up with charges for violating Thailand’s emergency decree after trying to wave protest signs at a motorcade passing through Rayong yesterday.
— The Thaiger

Virus-Crossed Lovers: No Reunion for Thai-Foreign Couples in Pandemic
For Piyamon and Daniel, their long distance relationship of three years was supposed to end in 2020.
— Khaosod English

Thai AirAsia X, Thai Lion Air banned from China for 7 days
Two Thai airlines have been banned from entering China for seven days after carrying covid-19 inflected passengers into Tianjin and Guangzhou over the past few days.
— Sawadee Siam

Pattaya mayor on the defensive over recent floods
Struggling with severe drought just months ago, Pattaya is now facing the opposite problem.
— The Thaiger

Thai-China Flights With Infected Pax Stop in Bangkok for Refuel
The civil aviation regulator on Thursday said no Thais were on two China-Thailand flights that were said to carry passengers with coronavirus.
— Khaosod English

151 Thai Soldiers Returning from Hawaii May Quarantine in Hua Hin
The 151 soldiers returning from a military exercise in Hawaii may be held at the Suan Son Pradipat Resort in Hua Hin to observe their condition, a military commander said, though a receptionist at the resort said she hasn’t heard about the plan.
— Khaosod English

The politics of students’ hairstyles
For decades, students have been grumbling about rigid school rules on hairstyles – short bobs for girls and tight crops, shaved at the sides for boys.
— Thai PBS News

What are the latest entry requirements for Thailand’s neighboring countries?
In March, the Thai government enacted a visa amnesty covering thousands of foreigners stranded in the country due to the covid-19 pandemic. The amnesty provided…
— Sawadee Siam