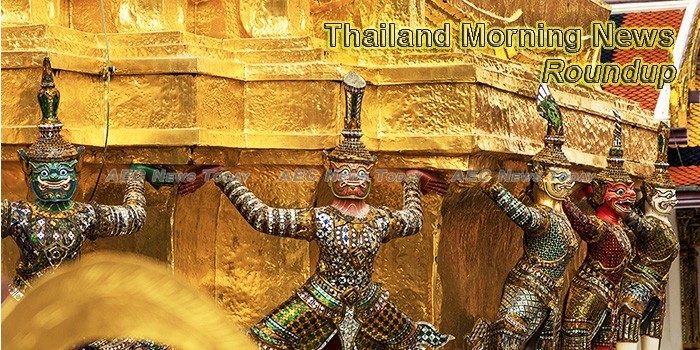 Key airports’ passengers to hit 200m, says Arkhom
Don Mueang, Suvarnabhumi and U-Tapao airports will have a collective capacity to handle up to 200 million passengers a year when each of their development plans are complete, Transport Minister Arkhom Termpittayapaisith said Monday.
— Bangkok Post (annoying popups)

Revenue of state firms outperforms
State enterprises contributed 25% more income than targeted during the eight months through May, says the chief of the State Enterprise Policy Office (Sepo).
— Bangkok Post

Tech start-ups thrive in Thailand as the country aims to be a global start-up destination
The future is bright for Thai tech start-ups as Thailand is being groomed to become a global start-up destination. It will attract talent and experts which would allow them to exchange experiences and to brainstorm for new ideas which will benefit the country and the whole region.
— Open Gov

Universities to act over botched admissions
The Council of University Presidents of Thailand (CUPT) has vowed to improve its admission procedures, known as the Thai University Central Admission System (TCAS), which is being introduced for the first time this year.
— Bangkok Post (annoying popups)

Singapore-Thailand Defense Ties in Focus with Navy Exercise
Last week, Singapore and Thailand held another iteration of a biennial naval drill. The exercise once again put the spotlight on the defense side of the relationship between the two Southeast Asian states amid a wider domestic and regional developments.
— The Diplomat

True Move to abstain from 1800-MHz auction
Thailand’s True Corp has confirmed speculation that its mobile division True Move plans to sit out of the upcoming 1800-MHz spectrum auction.
— telecomasia.net

Heat on Vietnam car barriers rises
The commerce and industry ministries are escalating demands that the Vietnamese government eliminate non-tariff barriers on cars imported from Thailand, as Thai car shipments to Vietnam have stalled for over six months.
— Bangkok Post

Poll shows Thais are worried Thailand may become hub of imported trash
More than 60 percent of Thais are concerned that Thailand may end up being a hub of imported hazardous trash because of widespread corruption, greediness, lack of discipline of the Thai people, lax regulation and inspection and lack of an efficient body in garbage management, said Mr Noppadol Kannikar, director of Super Poll, citing the result of an opinion poll.
— Thai PBS

Thailand revitalising Acmecs scheme
Renewed schemes for the region’s three great rivers — under the Ayeyawady-Chao Phraya-Mekong Economic Cooperation Strategy (Acmecs) — are making a comeback after some soul-searching amid a plethora of connectivity plans. Bangkok will host the 8th Acmecs summit this Friday and Saturday.
— Bangkok Post

Phuket officials ordered to probe alleged mangrove encroachment
The Phuket Provincial Damrongdhama Centre (Ombudsman’s Office) has been tasked with investigating alleged encroachment in a mangrove forest near Layan Beach in Cherng Talay after local fishermen were blocked off access across land that is now being claimed as private.
— The Phuket News

Paraquat green light under scrutiny by human rights commission
THE NATIONAL Human Rights Commission (NHRC) is investigating the Agriculture Department over allegations that it violated human rights last October when it extended the licences for many companies to sell paraquat.
— The Nation

Thailand Unveils New Crypto Laws, Legalizes 7 Cryptocurrencies
The Securities and Exchange Commission of Thailand approved the new framework for cryptocurrency regulation in a meeting that transpired on Thursday, June 7. Initial Coin Offerings (ICO) can now safely proceed in the country while companies can apply for exchange licensing. The proposed framework will go into effect later this month, legalizing seven prominent cryptocurrencies.
— blokt

TAT launches “Thailand Shopping and Dining Paradise 2018”
Thailand’s annual shopping extravaganza is to get a complete innovative makeover this year with a special focus on the shopping and dining delights of three provinces that border Thailand’s neighbouring countries in the Greater Mekong Subregion.
— TAT News

Thai turtle’s plastic-filled stomach heightens ocean crisis
Startling images of plastic shreds, rubber bands and other debris found jammed in the stomach of a green turtle in Chanthaburi province have highlighted the crisis of waste-strewn seas following the widely publicised death of a whale earlier this month.
— The Phuket News

Karen brace for final verdict on forest eviction
THE SUPREME Administrative Court will today read the verdict in the administrative lawsuit over the 2010 forced eviction of the Karen community from Phetchaburi’s Kaeng Krachan National Park.
— The Nation

Five shot dead in Yala home invasion
Police say five men have been shot dead in the southern province of Yala, the latest killings in a region plagued by insurgency for over a decade.
— The Thaiger