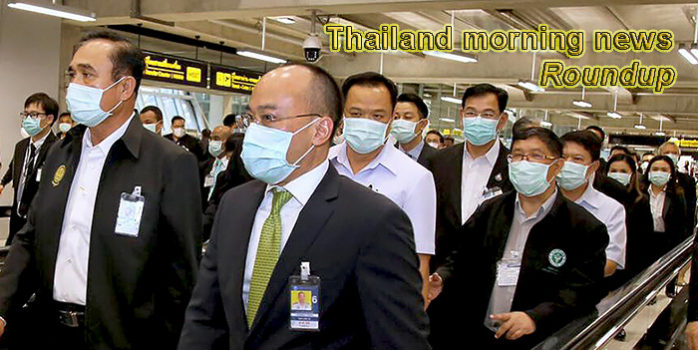 Deaths skyrocket while Beijing delays coronavirus hot zone evacuations (video + photo gallery)
Thailand and several other Asean member states continue waiting for approval from Beijing to launch evacuation flights for their citizens stranded in the heart of the Wuhan novel coronavirus (2019-nCoV) hot zone, as the number of confirmed infections approaches 12,000; more than 90 per cent of which have occurred in the last seven days.
— AEC News Today (video + gallery)

Cocktail of flu, HIV drugs appears to help fight coronavirus: Thai doctors
Thai doctors have seen success in treating severe cases of the new coronavirus with combination of medications for flu and HIV, with initial results showing vast improvement 48 hours after applying the treatment, they said on Sunday.
— CNA

Thai Foreign Minister explains why Government cannot rush Wuhan evacuation
In an effort to answer those who have accused the Thai government of being slow to evacuate its citizens from the Chinese city of Wuhan, the origin of the growing coronavirus outbreak, Foreign Minister Don Pramudwinai said today (Sunday) that it is not a competition to see which country will be the first to evacuate their citizens.
— Thai PBS News

Coronavirus: Gov’t Rejects Proposal to Suspend Chinese Tourist Visas
The government on Friday declined to take up a request by the Ministry of Public Health to stop issuing visas on arrivals to Chinese visitors in order to combat the new coronavirus strain.
— Khaosod English

PM concerned about people, provides support to public health practitioners
Regarding the corona virus outbreak, the Prime Minister is concerned about the effects on the population and is ready to bring Thai people back from Wuhan as soon as possible.
— NNT

Drought problems promptly solved
Water is to be distributed to drought-hit areas as a short-term measure while more reservoirs are to be constructed as a long-term measure against drought.
— NNT

Activities against coronavirus
Many provinces have produced video clips in Thai and Chinese to cheer up Wuhan residents in China in the face of a coronavirus outbreak, and urged villagers to wash their hands properly to prevent infection.
— NNT

DIT asks people not to hoard face masks
The Department of Internal Trade (DIT) will consult with face mask and hand washing gel manufacturers tomorrow, to ensure that the number of products being made will meet the demand of consumers.
— NNT

Public Health Ministry sets up war room to combat coronavirus
The Ministry of Public Health has set up a war room to tackle the 2019 novel coronavirus (2019 nCoV), as well as to coordinate efforts against the spread misinformation about the presence of the disease in Thailand.
— Newsline (video)

Thai interns in Chongqing arrives home, now in self quarantine
A group of 12 students from Chonburi Technical College who joined a 3-month internship program in Chongqing , China since November has safely returned to Thailand.
— Newsline (video)

Thais in Wuhan to be evacuated by air
Air Asia is ready to evacuate Thai nationals without fare from Wuhan city while a total of 135 Thais have requested to return home from China.
— Newsline (video)

Thai Airways suspends flights to six Chinese destinations as coronavirus outbreak grows with 304 deaths
Thai Airways has moved to cancel flights to 6 Chinese destinations until the 29th of February as the latest figures from China announced on Sunday show another jump in deaths and infections as a result of the coronavirus outbreak.
— ThaiExaminer.com

Talks Between Thailand, Insurgents to Resume in March-Thai Official
Talks will resume in early March between representatives of the Thai government and the main insurgent group fighting for independence in the country largely Muslim-Malay south, the head of the government team on Friday.
— The New York Times

For Thailand’s female land rights defenders, activism is a dangerous and daunting necessity
Growing up, cassava farmer Nittaya Muangklang did not think she would ever become an activist – let alone that she would lead a group of land rights defenders in the first-ever bid to challenge Thailand’s government and its “take back the forests” policy at the Supreme Court.
— South China Morning Post

Coronavirus Delivers Severe Blow to Thai Tourism Industry
The governor of the Tourism Authority of Thailand (TAT) has reported that China’s new coronavirus has dealt a sever blow to the Thai tourism industry.
— Chiang Rai Times

WHO praises Thailand’s efforts to combat PM2.5
The World Health Organization (WHO) has commended Thailand on its efforts to address high levels of particulate matter of 2.5 microns or less (PM2.5), while suggesting the country adopt its air quality guidelines.
— Pattaya Mail

Pushing for accountability
The Future Forward Party (FFP) will add a new dimension to the upcoming no-confidence debate against the government, as it has an ace up its sleeve which will deal the government a knockout blow, said party secretary-general Piyabutr Saengkanokkul.
— Bangkok Post

Thai doctors deploy HIV drugs: Virus update
A 44-year-old man from Wuhan died in the Philippines on Saturday as a result of coronavirus, the first known death outside China.
— Bangkok Post

Hazy days and Sundays – Bangkok has fifth highest air pollution in the world
“Unhealthy”. That about sums up the air Bangkokians are breathing this morning, a situation almost completely avoidable but allowed to continue by the Thai Government.
— The Thaiger

Thailand eyes trade deal with UK
Brexit could pave the way for a free trade agreement between Thailand and the United Kingdom, says Auramon Supthaweethum, director-general of the Trade Negotiation Department.
— Bangkok Post

Grab brings ‘Mini-GC’ to more Thai secondary cities, provinces
Grab has kicked off 2020 by announcing its expansion plan to more secondary cities and provinces across Thailand through a new, innovative Mini-Grab Centre business model or “Mini-GC”.
— The Phnom Penh Post

Well-known Phuket medium found hanged
An elderly woman, a well-known medium for the highly revered spirit of “Toh Phra Thaew”, was found hanged in her house in Thalang district of this island resort province on Sunday morning. She was believed to have committed suicide.
— Bangkok Post

Thailand confirms first human-to-human coronavirus transmission, total cases rise to 19
Thailand has seen its first case of human-to-human transmission of the new coronavirus inside the country, a health official said on Friday (Jan 31), as it raised its total number of cases to 19, the second-highest after China.
— CNA

Prayuth, Prawit, 4 Others Face No-Confidence Censure
The opposition said Friday it is sighting its gun on PM Prayut Chan-o-cha and four other ministers for the first no-confidence debate in nearly seven years.
— Khaosod English

Outstanding inventions displayed at Thailand Inventors Day 2020
February 2nd marks Thailand Inventors’ Day on which the National Research Council grants awards to outstanding researchers and inventors, while innovation in the prevention of PM 2.5 airborne dust and coronavirus are put on display.
— NNT

Phuket, Bangkok and Chiang Mai hard hit over ‘palpable’ tourism drop
The 2019-nCoV coronavirus, the official name for the Wuhan or Novel Corononavirus, is resulting in dozens of high-season flights to Thai southern beach resorts being cancelled.
— The Thaiger

Phuket’s governor appeals for calm, issues warning over fake virus news
Amid the flurry of news stories about the Wuhan Coronavirus outbreak, Phuket’s Governor Phakaphong urged people this week to beware of fake news and reports that don’t cite their sources.
— The Thaiger

King sends message of his deep concern over coronavirus outbreak in China
His Majesty the King of Thailand has expressed his concern over the outbreak of the novel coronavirus 2019 in China and has wished the Chinese government success in overcoming this medical crisis and in restoring to the country normal.
— Thai PBS News

Over 300 Phuket tour buses idled
More than 300 tour buses in Phuket have been parked for over a week with no Chinese tour group arrivals because of the coronavirus outbreak.
— Bangkok Post

Woman drowns in Kalasin canal
A woman drowned in an irrigation canal in Kamalasai district while cooling off with fellow villagers on Sunday, police said.
— Bangkok Post

Opinion: Why Did Statues of a Former PM Have to Go?
Although I am not a fan of former Prime Minister and autocrat Field Marshal Pibulsongkram, the removal of two bronze statues of him is something all Thais should be worried about.
— Khaosod English

Coronavirus deals severe blow to tourism industry
Thai tour operators are weathering the storm after China imposed travel restrictions on group tours until late next month in a move to control the spread of the novel coronavirus, which the World Health Organisation has declared a global emergency.
— Bangkok Post

Woman Who Faceswapped Heroine Statue Faces Criminal Charges
A provincial governor said Friday he will file legal actions against a woman who photoshopped her face onto a statue of a heroine widely revered by the locals.
— Khaosod English