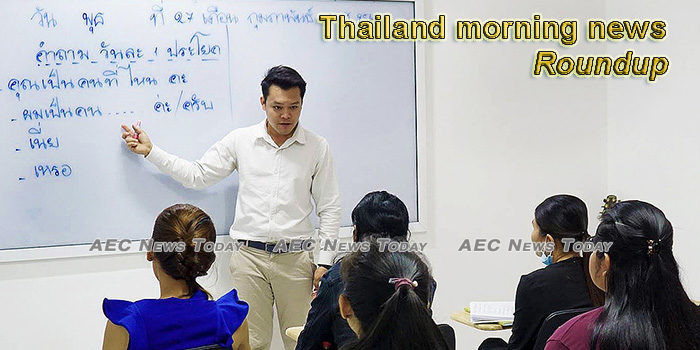 Thai government considering officially extending Songkran Holiday this year to boost tourism
The economic sector is discussing an extension of holidays during the Songkran festival – from April 11-19 – before it proposes the measure to the government on February 18, Deputy Prime Minister Wissanu Krea-ngam said.
— The Pattaya News

Gov’t Eyes Plan for State Media to Take Over Coverage in National Crisis
The government’s proposal to monopolize news coverage during times of national crises drew criticism on Monday from media personalities, who warn that the measure risks eroding press freedom even further.
— Khaosod English

Thailand announces one more confirmed case of COVID19 bringing total to 35 in Thailand
The health ministry said on Monday that Thailand had recorded one new case of the novel COVID19 coronavirus and was increasing screening of visitors from Singapore and Japan entering the country.
— The Pattaya News

Economic growth slips to 5-year low, virus to hit tourism
Thailand’s economy grew at its weakest pace in five years in 2019, as exports and public investments slowed, and the impact from the coronavirus epidemic is set to pile more pressure on Southeast Asia’s second-largest economy this year.
— Bangkok Post

Thailand leads in ASEAN with its smart cities
Thailand introduced the Eastern Economic Corridor (EEC) initiative to transform three Thai provinces into smart cities during the 2019 ASEAN Summit. This move has proved to be a successful one, one report notes.
— OpenGov

Army gives up cash cows
The army has struck a deal with the Finance Ministry’s Treasury Department on the management of its commercial welfare projects and its commercial use of state land to ensure transparency and regulation compliance.
— Bangkok Post

It’s OK if Opposition limits debate on previous government to 20%
The government’s chief whip says there would be no objection to the Opposition questioning the performance of the previous administration, also under the premiership of General Prayut Chan-o-cha, if such matters occupy no more than 20% of the allotted 3 days of the censure debate, due to start on Monday.
— Thai PBS News

2019: Survey of the Thai Political Landscape in Transition
2019 is counted as the year when the arc of Thai politics was most striking since it was a time of transition from the ‘dark era’ under almost 5 years of the NCPO to the ‘hazy era’ after the election (which had been postponed 6 times) under the 2017 Constitution whose complicated design locked politics into a multilayered parliamentary system, and the Future Forward Party emerged to strongly challenge the old system.
— Prachatai English

Thai army to transfer control of land after mass shooting
Thailand’s army agreed on Monday to transfer management control of 160,000 hectares of commercial land to the finance ministry in a drive to reform its business practices after a soldier went on a shooting spree over a property deal gone sour.
— Reuters

Thailand Open raises over $50,000 for breast cancer charity
Thanks to the fundraising activities of the GSB Thailand Open presented by [email protected] and its associated supporters Proud Group, APG and WTA Charities, over THB 1.6 million (around US$53,000) has been raised for the Queen Sirikit Centre for Breast Cancer Foundation.
— WTA (media release)

Post-Coup Overview on Exiles: ‘at least’ 6 disappeared, 2 dead, almost a hundred in flight
After the 2016 coup d’état, data in a 2018 report compiled by the Thai Lawyers for Human Rights Centre showed that at least 86 political refugees left the country for coup-related reasons.
— Prachatai English

Northern districts successfully reforest vast forest lands
Parts of the rich green forests of Chiang Mai and Mae Hong Son provinces that we see today are the result of a collaboration of many local residents who changed the fate of these prime locations. Panod Srisinsuphya takes us to see how they were able to achieve so much.
— Newsline (video)

FFP deputy leader resigns, will leave army house
Future Forward (FFP) deputy leader Lt Gen Pongsakorn Rodchomphu has announced his resignation from the party’s executive board and said he will be moving out of his military-owned house by the end of March.
— Bangkok Post

Japan praises Thailand as being investment friendly
According to the Special Advisor to the Prime Minister of Japan, the land of the rising Sun continues to view Thailand as an investment-friendly economy.
— Pattaya Mail

Gov’t introduces financial measures aiding tourism industry
The Thai government is introducing a set of financial aids to help operators in the tourism sector cope with the impact of Covid-19 or the new coronavirus.
— Newsline (video)

‘War rooms’ to target censure hoax
A number of “war rooms” will be set up to help fight disinformation as the censure debate against Prime Minister Prayut Chan-o-cha and five of his ministers edges closer, according to the government.
— Bangkok Post

Phuket businesses seek B50bn in help
Phuket: Businessmen are making an urgent call on the government to allocate 50 billion baht in soft loans as part of financial assistance to shore up tourism in Phuket, currently left reeling by a sharp drop in Chinese tourists as a result of the widening Covid-19 outbreak.
— Bangkok Post

Poll shows public looking forward to censure debate
Welcome back to Newsline. A Suan Dusit Poll has been conducted ahead of a censure debate against the government scheduled in parliament for later this month, and designed to gauge how interested people may be in the process, along with what problems should be addressed.
— Newsline (video)

Chonburi Police continue crackdown on motorcycle racing gangs after continued complaints
Bang Lamung Police have launched a renewed crackdown on hundreds of illegal motorbike racers during the past weekend, many who gathered in the area for a bike meetup.
— The Pattaya News

Phu Kradueng fires ‘under control’
A bushfire in Loei’s famous Phu Kradueng National Park was finally brought under control on Monday morning, after destroying about 3,400 rai of forest.
— Bangkok Post

Ex-Pheu Thai boss jailed for two years
Former Pheu Thai leader Yongyuth Wichaidit will serve two years in jail after the Court of Appeal denied his request to appeal its ruling last year that found him guilty of allowing the sale of monastic land to make way for the Alpine golf course.
— Bangkok Post

Emergency decree in Deep South extended for 3 months
The emergency decree, currently in effect in Thailand’s three southern border provinces of Yala, Pattani and Narathiwat and certain districts of Songkhla province, is to be extendeduntil June 19th.
— Thai PBS News

Cooler weather in north, cloud and possible rain in south
The TMD (Thailand Meteorological Department) says that another high-pressure system originating in China is covering Thailand’s north-east and affecting weather in the South China Sea, while weak easterly winds continue to prevail across the Gulf of Thailand.
— The Thaiger

Excise delays levy process
The Excise Department has put on hold a process to consider levies on salty food and non-alcoholic beer until the Covid-19 epidemic is under control, its chief says.
— Bangkok Post

Doi Chaang vows to pay debt-hit farmers money it owes
A major Thai coffee brand has vowed to pay about 200 farmers who were forced to take out loans while waiting nearly three years for payments due them, leaving them with spiralling debts.
— Bangkok Post

Army signs MoU for private sector management of its real estate assets
Thailand’s Army and the Treasury Department signed a memorandum of understanding (MoU) this morning, under which the Army’s 40 commercial welfare schemes, which include golf and race courses, land, buildings and recreational venues, will be professionally managed by the private sector with benefits shared between the Army, the Treasury and the private sector.
— Thai PBS News

GM to withdraw from Thailand this year
General Motors (GM) announced it will stop selling Chevrolet vehicles in Thailand and sell its Rayong plant by the end of this year.
— Bangkok Post

Countdown to reopening – contracts awards for new Maya Bay infrastructure
New plans are now being enacted which will lead to the re-opening of Maya Bay to tourism again.
— The Thaiger

Chon Buri sugarcane vendor dragged behind motorbike after thief steals his phone
An elderly sugarcane vendor in Chon Buri province’s Sattahip district sufferered multiple injuries when a potential customer stole his phone and tried to speed off on his motorbike, leading the vendor to grab onto the bike in a desperate attempt to to get it phone back.
— The Thaiger

Grandparents and 2 Year-old Grandson Killed in Three Vehicle Collision
A couple and their grandson have been killed in a three vehicle collision in northeastern Thailand on Sunday.
— Chiang Rai Times