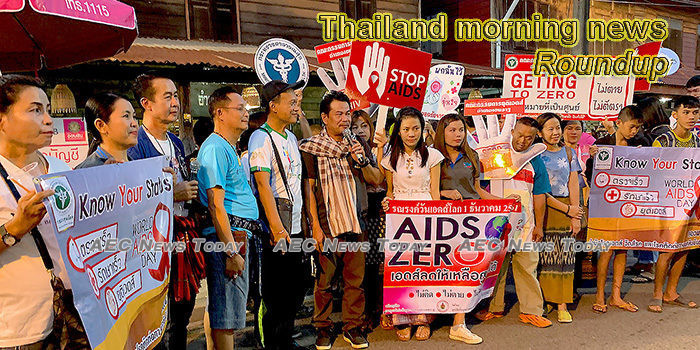 Chemicals ban derailed by ‘4 forces’
BioThai, an anti-farm chemical pressure group, has alleged that four major forces” were behind the decision to scrap the ban on the herbicide glyphosate and delay the prohibitions against the herbicide paraquat and pesticide chlorpyrifos.
— Bangkok Post

Prayut calls for unity after defeat
Prime Minister Prayut Chan-o-cha has called on coalition parties to honour their original gentleman’s agreement, after the government suffered a shock defeat in its bid to prevent formation of a panel to scrutinise Section 44.
— Bangkok Post

BTS contracts to be extended by 40 years
Bangkok Metropolitan Administration (BMA) will propose to the cabinet the extension of BTS’ operation concession contracts by another 40 years, with fares capped at not more 65 baht per trip throughout the period.
— Bangkok Post

Senior health officials reiterate support for banning three agro chemicals
In an apparent show of opposition to the National Hazardous Substances Committee’s about-face on the banning of paraquat, glyphosate and chlorpyrifos, three top public health officials have announced that the…
— Thai PBS News

German busted for 5 day overstay in Pattaya
Five Chonburi immigration officers have arrested a 45 year old German man outside a hotel in Pattaya. “Bert E” had overstayed his visa by five days and was handed over to Pattaya police.
— The Thaiger

Thailand’s PM insists military conscription is still needed
Prime Minister Prayut Chan-o-cha, a former General, has stressed the need for Thailand to retain military conscription, because the three armed forces are currently more than 100,000 personnel short of their full complement, of which only 30% are expected to enlist voluntarily.
— Thai PBS News

Soi Dog reaches new milestone – neutering 100,000 animals in one year
“The day we see no suffering of stray animals on the streets and the eradication of rabies in Thailand.” That’s the long-term goals of the Soi Dog Foundation.
— The Thaiger

Lack of alternatives rationale for Thai U-turn on glyphosate
Thailand’s government yesterday went back on its plan to ban the controversial pesticide, glyphosate, and it also deferred bans on two other agricultural pesticides, paraquat and chlorpyrifos.
— Feednavigator.com

Thai c.bank chief says worried about rapid baht gains
Thailand’s central bank is still concerned about the rapid strengthening of the baht THB=TH and has steadily taken action to prevent the currency from rising too fast, the governor said.
— Nasdaq

Taking steps to advance Thailand’s Industry 4.0 ambitions: The Nation contributor
The announcement by the Transport Ministry to legalise ride-hailing services by March 2020 comes in good time.
— The Straits Times

TDRI sceptical of cash rebate impact
The recently approved Baan Dee Mee Down, a 50,000-baht cash rebate programme, is unlikely to help boost the country’s property market much because the impact will be limited and fleeting, says the Thailand Development Research Institute.
— Bangkok Post

Thai Airways absent from new Top 10 list of world airlines
The airline review website AirlineRatings has just announced its list of the Best Airlines 2020 and Thailand’s national carrier is absent. In fact Thai Airways isn’t even in the top 20 airlines, as compiled by the website.
— The Thaiger

S44 panel vote sparks walkout
The House of Representatives was thrown into turmoil on Wednesday after both sides were locked in conflict over voting for a panel to study the effects of orders issued under Section 44.
— Bangkok Post

Chaos as senior officials deny easing the chemicals ban announced by the Industry minister
The Thai government’s position on the ban on three controversial chemicals was plunged into chaos on Thursday in addition to crisis after senior officials at the Ministry of Public Health directly challenged the assertions of the Minister for Industry Suriya Juangroongruangkit on Wednesday when he announced that a delay of the ban had been agreed by the National Committee on Hazardous Substances and that the ban on one substance glyphosate had been lifted.
— Thaiexaminer.com

Thailand’s National Parks Tells Tourist to Take Your Garbage With You
Tourists visiting all national parks in Thailand will be required to take their garbage with them after visiting.
— Chiang Rai Times

Nakhon Sawan becomes hotspot with attractions
Man-made and cultural attractions are the focus for Nakhon Sawan province to reach 5 billion baht in tourism revenue with 2 million visitors by 2021.
— Bangkok Post

MOAC Supports RAOT to Organize Thailand Rubber Expo 2019
The Rubber Authority of Thailand, under supervision of the Ministry of Agriculture and Cooperatives, is ready to organize the Thailand Rubber Expo (TRE 2019) which will be held from November 29th to December 1st at Impact Muangthong Thani.
— Newsline (video)

Perth man facing death penalty after $90,000 Thailand drug bust
A Rockingham man with links to the Hells Angels Outlaw Motorcycle Gang is facing the death penalty in Thailand, accused of being involved in an international drug trafficking ring.
— Perth Now

Thailand bounce back with 7-0 win over Brunei in SEA Games 2019 men’s football
The 2017 SEA Games gold medallists had suffered a 2-0 defeat to 2019 AFF U22 Championship winners Indonesia in their opening match, but Thailand got thier campaign back on track with an impressive win over Brunei.
— FOX Sports

Paddy output to decline due to conditions
Thailand’s annual paddy production for both the main and second crops is forecast at 27-28 million tonnes in the 2019-20 season, weighed down by a drop in production for the second crop because of flooding and drought.
— Bangkok Post

Thais setting the pace for social commerce
Thailand is in the pole position for social commerce in the world, says price-comparing website Priceza, and local merchants should drive towards unique and value-added products to stay competitive in the market.
— Bangkok Post

Youngsters’ game time ‘worrying’
Thai youngsters spend an average of three to five hours per day playing online games — though in Bangkok that can rise to more than eight hours.
— Bangkok Post

Firms urged to boost skills with training
The Department of Skill Development on Wednesday called on employers to organise skills training for staff to boost not only productivity but also the competitiveness of their businesses.
— Bangkok Post

Gov’t Accused of ‘Double Standard’ in MP Encroachment Inquiry
An activist on Thursday said the authorities are applying a double standard in the investigation against a coalition MP, who stands accused of building a poultry farm on protected forest area.
— Khaosod English

Member of committee to ban farm chemicals quits in protest over U-turn
The Thai Industry Minister Suriya Juangroongruangkit is being challenged over his claims of a “unanimous vote of support” to overturn the decision to ban the controversial agri-chemicals.
— The Thaiger

House vote recount blocked by lack of quorum for the second time
Lack of a quorum in the House of Representatives this morning (Thursday) forced House Speaker Chuan Leekpai to call off a recount of the vote, which the Government narrowly lost in the initial round, on the opposition motion to set up an ad hoc panel to study the impacts of pre-election junta orders and executive orders issued under Section 44 of the interim constitution.
— Thai PBS News

Spotlight at Youth Greenovation Awards 2019
The Power of Innovation Foundation, in collaboration with PTT Group and the Science Society of Thailand Under Patronage of His Majesty the King, hosted the Youth Greenovation Awards 2019 at the YGA Science Fair 2019, with the Royal Trophy of Her Royal Highness Princess Maha Chakri Sirindhorn, scholarships, and opportunities to participate in international competitions, and awards recognising community work.
— Bangkok Post

Thailand’s ‘floating’ crosswalk makes drivers stop and look
The Thai children walking on the zebra crossing look as if they are stepping from one white board, floating well above the road, to the next – but it is just an optical illusion, created by a volunteer group aimed at making roads safer for pedestrians.
— CNA

Teacher Slaps Students for Not Doing English Homework, Gets Off Scot-Free
No disciplinary action has been taken against a teacher who slapped students repeatedly for not doing their English homework, a school official said Thursday.
— Khaosod English

Over forty Sa Kaeo Police raid carnival game booths at temple fair, arrest vendors- considered Gambling under Thai law
Sa Kaeo- First, it was the arcade claw game machines that police cracked down upon in Thailand. Now, it appears there is a new target- carnival games, popular at temple fairs where one uses an airsoft gun to shoot balloons for prizes.
— The Pattaya News

First Phuket tollway to be approved linking Kathu and Patong
Phuket’s first ever tolled highway, to be built linking Kathu to Patong route, is awaiting approval from the government’s committee on public-private partnership.
— The Thaiger

“Medical cannabis is no panacea” – Thai FDA
The Thai Food and Drug Administration is again warning the public that cannabis is not a magic medicine that can cure all illnesses.
— The Thaiger

Direct-to-consumer format poised for growth next year
The direct-to-consumer model is expected to gather steam next year as a new approach for brands to reach customers directly without relying on retailers or the e-marketplace, says Songpol Shanmatkit, chief executive of SET-listed TV Direct, a home shopping operator.
— Bangkok Post

Finland’s Adventure-Themed ‘SuperPark’ To Open at Iconsiam
Taking children to a playground will no longer be boring for parents when the new indoor activity park opens this weekend.
— Khaosod English