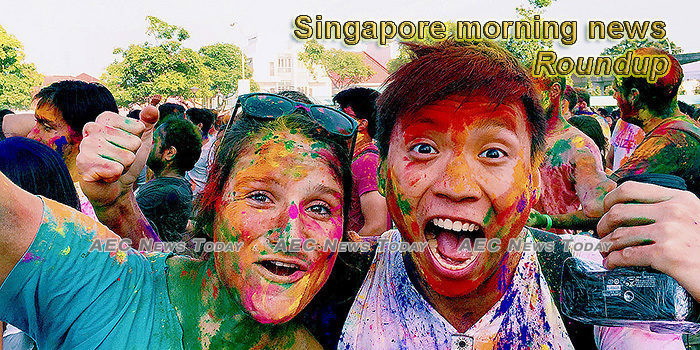 All 1,631 passengers cleared to leave Costa Fortuna in 14 hours
All passengers have disembarked from a cruise ship that docked in Singapore yesterday morning after being rejected at several ports over fears about the coronavirus.
— Straits Times (annoying popups)

Costa Fortuna cancels next 2 cruises out of Singapore due to ‘restrictive’ COVID-19 measures by other ports
The Costa Fortuna cruise ship docked in Singapore has had its next two trips cancelled following restrictive measures by ports in the ship’s itineraries.
— Channel NewsAsia (very annoying popups)

Logistics company first to be fined for making false declaration on fair hiring
A logistics company has been fined S$18,000 for falsely declaring in its work pass application that it had considered local candidates fairly in order to hire a foreigner for a job position.
— Channel NewsAsia (very annoying popups)

Many local COVID-19 cases due to ‘socially irresponsible’ behaviour of a few: Health Minister
Many locally transmitted COVID-19 cases in Singapore were the result of the socially irresponsible actions of a few individuals who continued to attend events and activities despite being unwell, said Health Minister Gan Kim Yong on Tuesday (Mar 10).
— Channel NewsAsia (very annoying popups)

Support for businesses in Singapore
Around $8.3 billion will be allocated over the next three years to help companies build up capabilities and transform to leverage future opportunities.
— Straits Times (annoying popups)

Punggol extension on Cross Island Line to begin construction in 2022
Travel time between Pasir Ris and Punggol will be halved with the construction of an MRT line extension linking the two towns by 2031.
— Channel NewsAsia (very annoying popups)

A*Star, NUS collaborating on study of liver disease focusing on Asian characteristics
It is a disease that is estimated to affect up to one-third of Singapore’s population and is rising in incidence in the region, yet little is currently understood about the illness in Asians.
— Straits Times (annoying popups)

Focus on tech and the law at new SMU centre
Singapore is to undertake a first-of-its-kind research on creating a working programming language for the country’s laws and contracts.
— Straits Times (annoying popups)

1 in 5 patients went out or carried on with work despite being ill
One in five confirmed coronavirus patients here went out despite being unwell, said Health Minister Gan Kim Yong yesterday.
— Straits Times (annoying popups)

Punggol and Pasir Ris residents to get four more train stations by 2031
With the new extension, commuters can expect to save up to 25 minutes when they travel.
— Straits Times (annoying popups)

DPM Heng to speak at ST-BT Budget 2020 Roundtable
WITH the annual Committee of Supply debate having come to an end last week, Deputy Prime Minister and Finance Minister Heng Swee Keat will share further views on Singapore’s outlook amid the Covid-19 outbreak, as well as longer-term structural issues, at a roundtable organised by The Business Times and The Straits Times on Wednesday.
— The Business Times

DPM Heng and 3 other panellists to discuss outlook for S’pore’s economy amid virus crisis
Deputy Prime Minister and Finance Minister Heng Swee Keat will share views on the outlook for Singapore’s economy amid the coronavirus outbreak, as well as longer-term structural issues, during a roundtable organised by The Business Times and The Straits Times on March 11.
— Straits Times (annoying popups)

Generation Grit: Mindful of those who helped him, ex-lieutenant colonel pays it forward
Mr Choy Yong Cong, 34, knows the many pairs of hands it takes to raise a child.
— Straits Times (annoying popups)

Laurene Powell Jobs does not intend to pass down fortune to children
According to Powell, mass accumulation of wealth is dangerous for a society.
— Mothership

Honestbee retrenches 80% of staff, delays payment of salaries and CPF contributions
Struggling start-up Honestbee has retrenched about 80 per cent of its staff, in the wake of the temporary closure of its grocery store Habitat.
— Straits Times (annoying popups)

FAS & MCCY issue joint non-adversarial statement about working towards Goal 2034
The Football Association of Singapore and the Ministry of Culture, Community and Youth have kissed and made up.
— Mothership

SCDF rescues 3 people trapped in Sengkang flat after PMD catches fire in living room
Three people were rescued from a Sengkang Housing Board (HDB) flat after a fire broke out in the unit’s living room in the early hours of Tuesday morning (Mar 10).
— Straits Times (annoying popups)

Singaporean driver was distracted in fatal crash in NZ: Coroner
Singaporean Seow Kai Yuan, who died while driving a car in New Zealand, was distracted when his Toyota Camry crossed the centre line of a highway into the path of an oncoming camper van, a coroner has found.
— Straits Times (annoying popups)

Good grades of molester from NUS show he could ‘compartmentalise his life’ amidst sexual problems, says prosecutor
Three weeks’ jail sought instead of the initial sentence of supervised probation.
— Mothership

Prosecution appeals against probation for undergrad who molested woman, seeks at least 3 weeks’ jail
Prosecutors on Tuesday (March 10) appealed for an undergraduate to be jailed at least three weeks for molesting a woman at an MRT station.
— Straits Times (annoying popups)

Singapore morning news for May 5